What is The Free World Charter? 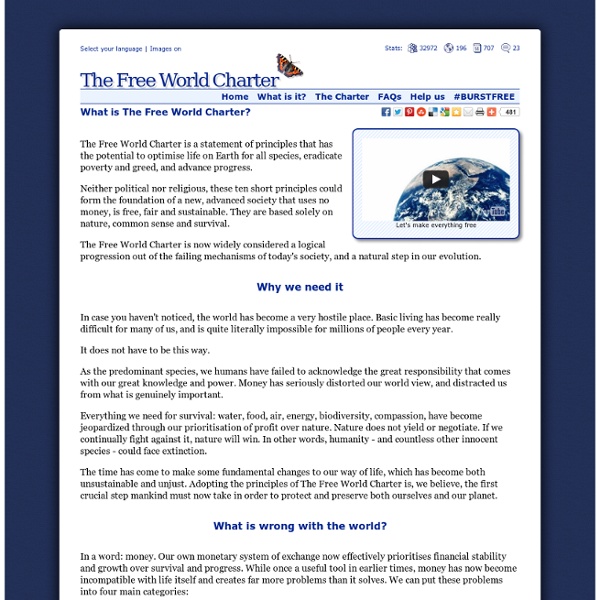 What is The Free World Charter? Let's make everything free The Free World Charter is a statement of principles that has the potential to optimise life on Earth for all species, eradicate poverty and greed, and advance progress. Neither political nor religious, these ten short principles could form the foundation of a new, advanced society that uses no money, is free, fair and sustainable. The Free World Charter is now widely considered a logical progression out of the failing mechanisms of today's society, and a natural step in our evolution. Why we need it In case you haven't noticed, the world has become a very hostile place. It does not have to be this way. As the predominant species, we humans have failed to acknowledge the great responsibility that comes with our great knowledge and power. Everything we need for survival: water, food, air, energy, biodiversity, compassion, have become jeopardized through our prioritisation of profit over nature. What is wrong with the world? 1. 2. 3. 4. Related:  GLOBAL DIALOG

What is Theory of Change? | Theory of Change Community Image credit: Sidney Harris Theory of Change is essentially a comprehensive description and illustration of how and why a desired change is expected to happen in a particular context. It is focused in particular on mapping out or “filling in” what has been described as the “missing middle” between what a program or change initiative does (its activities or interventions) and how these lead to desired goals being achieved. The Outcomes Framework then provides the basis for identifying what type of activity or intervention will lead to the outcomes identified as preconditions for achieving the long-term goal.

Common Law Community Training Manual | Welcome to ITCCS.ORG and The International Tribunal into Crimes of Church and State Establishing the Reign of Natural Liberty: The Common Law and its Courts A Community Training Manual Issued by The International Tribunal into Crimes of Church and State (Brussels) What is assembling is the first court in history to bring judgment against the Vatican and the Crown of England as institutions. Introduction History was made on February 11, 2013, when the first Catholic Pope in history resigned from his office during peacetime in order to avoid arrest for protecting and aiding child raping priests. Barely two weeks later, the same Pope Benedict, Joseph Ratzinger, was found guilty by the International Common Law Court of Justice for Crimes against Humanity , including child trafficking. Evading justice inside the Vatican, Ratzinger is presently an international fugitive from the law – and a living example of the power of Common Law courts to successfully prosecute so-called “heads of state”. Why we are Taking Action: Freeing Ourselves by Remembering the True Law 1. 2. 1. 2. 3.

Why | PER | Il Parco dell'Energia Rinnovabile Our main aim is to contribute to saving the planet: it’s so obvious we take it for granted. PeR was also created for three other reasons: The three whys of PeR The first motivation is personal: the founders Alessandro and Chiara, after reading hundreds (maybe thousands) of books on renewable energy and sustainable agriculture, felt ready to put their knowledge into action. The second motivation is cultural: the region is enchanting; it has been inhabited for three thousand years. There is a relationship between topics of conversations and places. The third motivation is an act of love for agriculture: To explain what we mean, we’ll tell you where we started: the ground was abandoned in the 60’s, when the farmers left for the city. PeR is 575 meters above sea level and it’s located between Todi and Amelia in the municipality of Guardea. The place is really special, because it is “normal”, in that, it doesn’t have any of the trappings of mass tourism.

The International Flag of Planet Earth The scientific study of flags is called vexillology, and the practice of designing flags is called vexillography. Both of these are an outcome of heraldry. In these practices there are different unofficial design rules/costums, about colors, placement, proportions, typography, and aestethics in general. This proposal is accurate according to the regulations regarding flags. Centered in the flag, seven rings form a flower – a symbol of the life on Earth. The rings are linked to each other, which represents how everything on our planet, directly or indirectly, are linked. Centered on an azure field, seven circles of silver interlaced, creating a flower.

Leicester AF Aurea Social | Educació - Salut - Autogestió Digital Culture The Venus Project Seminar (25 August 2013) Inicio REALITY, Reality, reality As Alice said to Humpty Dumpty after he replied “Glory!”, “Why, whatever do you mean by that?” Reality — wouldn’t even go there trying to define it. AR/VR/MR Augmented Reality, Virtual Reality, Mixed Reality, all coming to a headspace near you. Google Googles, Occulus Rift, Magic Leap, the list just goes on and on, and are all moving from the labs and techno-framing dungeons to a store shelf and digital click this coming year. And there is a mediated sense in which this is true. Hence the previous two posts, as breadcrumbs to get you to follow me to your new home in cyberspace. Blended/Mixed/Hybrid Reality will be offering you such things as a mediated walk thru your favorite art gallery. And that’s going to be one of the problems of mediated cyberspace. Cory Doctorow has many good things to say about this and you can thank your lucky stars he’s on your (our) side, working tirelessly on your (our) behalves, at EFF And guess who’s waiting for you. Learned a new word this week: Pronoia.

Betrayal This just landed in my inbox- Is a long read but worth it The Magna Carta SocietyBrings you the truth Was it realistic to expect the British to integrate with the Germans? James McCabe wrote of the Assyrians, the ancestors of the German peoples, (History of the World), “…a fierce and treacherous race – they never kept faith when it was in their interest to break treaties”. In 1918 Germany was finally beaten in one of the most horrific wars in modern history. At the expense of millions of human lives and untold and incalculable suffering, Germany was finally crushed and defeated militarily in 1945; but not so in spirit or aspiration. (Germany’s connections with Rome go back a long way. By 1964 discussions were being held in Parliament on the United Kingdom joining the European Community. The initial impetus of the debate having died down, it became easier to stealthily proceed towards joining without undue resistance, although it was still present. Act of Supremacy 1559. In summary.

IAP | Book | Transformative Eco-Education for Human and Planetary Survival Edited by:Jing Lin, University of MarylandRebecca L. Oxford, Alabama A&M University A volume in the series: Transforming Education for the Future. Editor(s): Jing Lin, University of Maryland. Rebecca L. Oxford, Alabama A&M University. Published 2011 Transformative eco-education is environmental education that is literally needed to transform and save our planet, especially during the global ecological crises of our present century. This book presents powerful ideas for transformative eco-education. The chapters in this book provide key principles, of which the following are just a few. CONTENTSIntroduction: Transformative Eco-Education in a Time of Global Ecological Crises, Rebecca Oxford and Jing Lin.