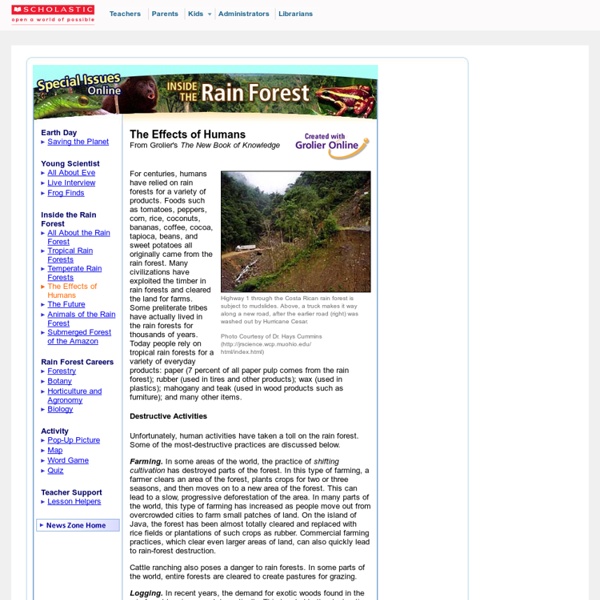 For centuries, humans have relied on rain forests for a variety of products. Foods such as tomatoes, peppers, corn, rice, coconuts, bananas, coffee, cocoa, tapioca, beans, and sweet potatoes all originally came from the rain forest. Many civilizations have exploited the timber in rain forests and cleared the land for farms. Some preliterate tribes have actually lived in the rain forests for thousands of years. Today people rely on tropical rain forests for a variety of everyday products: paper (7 percent of all paper pulp comes from the rain forest); rubber (used in tires and other products); wax (used in plastics); mahogany and teak (used in wood products such as furniture); and many other items. Destructive Activities Unfortunately, human activities have taken a toll on the rain forest. Farming. Cattle ranching also poses a danger to rain forests. Logging. Other activities. Destruction Aftermath Soil and erosion. Flora and fauna. Climate. Copyright © 2002 Grolier Incorporated. Related:  Rainforests

Rain Forest Threats, Rain Forest Species More than half of Earth’s rain forests have already been lost forever to the insatiable human demand for wood and arable land. Rain forests that once grew over 14 percent of the land on Earth now cover only about 6 percent. And if current deforestation rates continue, these critical habitats could disappear from the planet completely within the next hundred years. The reasons for plundering rain forests are mainly economic. Wealthy nations drive demand for tropical timber, and cash-strapped governments often grant logging concessions at a fraction of the land’s true value. “Homesteader” policies also encourage citizens to clear-cut forests for farms. Threats Solutions

Species Profiles Birds Mammals Plants Reptiles Rain Forest In Brazil, which houses 30 percent of the remaining tropical rain forest on Earth, more than 50,000 square miles of rain forest were lost to deforestation between 2000 and 2005. Biologists worry about the long-term consequences. Drought may be one. Some rain forests, including the Amazon, began experiencing drought in the 1990s, possibly due to deforestation and global warming. Efforts to discourage deforestation, mainly through sustainable-logging initiatives, are underway on a very limited basis but have had a negligible impact so far. The rain forest is nearly self-watering. Plants in the rain forest grow very close together and contend with the constant threat of insect predators. The National Cancer Institute (NCI) estimates that 70 percent of the anti-cancer plants identified so far are rain forest plants. Many trees and plants, like orchids, have been removed from the rain forest and cultivated.

About Ecological Footprint Right now we consume the equivalent of 1.5 planets' worth of natural resources every year! Did you know that if everyone on the planet lived like the average American, we would need 5 Earths to sustain our lifestyle? Where does that number come from? By determining how many hectares of land humans need to support their lifestyle and comparing it to the amount of arable land found on the planet, scientists are able to measure the impact of human demand on the planet’s eco systems, which is called our ecological footprint. Globally, all humanity consumes the equivalent of 1.5 planets' worth of resources to sustain the way we live each year. Every year we recognize Earth Overshoot Day, an annual marker of when humans begin using more resources than the planet will be able to replenish. Before we do irrevocable harm to the planet by depleting too many of its natural resources, we need to stop this unsustainable practice and reduce our consumption levels.

Rainforest Coloring Pages and Activities for Kids Color in your favorite rainforest birds, mammals, reptiles and plants in our coloring book, or teach yourself about the rainforest with our fun experiments, crafts, and quizzes. Coloring Pages: Amphibians Birds Insects Mammals Plants Reptiles Hands-On Projects from The Remarkable Rainforest Teach yourself about the rainforest with experiments, crafts, and quizzes. These activities are reprinted from The Remarkable Rainforest by Toni Albert, © 1994 by Toni Albert. If you order this book directly from the publishers at 800-353-2791, mention the Rainforest Alliance.

This Drone Startup Has An Ambitious (Crazy) Plan To Plant 1 Billion Trees A Year The world burns or cuts down about 26 billion trees a year. It replants about 15 billion. You can see the shortfall. At the moment, we're not planting trees quickly enough to combat deforestation—a problem with big implications for climate change. That's why Lauren Fletcher wants to automate the process with drone technology. "The only way we're going to take on these age-old problems is with techniques that weren't available to us before," Fletcher says. First of all, BioCarbon's drone flies above an area, mapping its level of forestation and reporting back on the potential for restoration. Fletcher doesn't say the method is better than hand planting, just cheaper. BioCarbon, which is based in the U.K., won a Skoll Foundation award last year and was recently featured in a Drones for Good competition in the United Arab Emirates, where it showed off a prototype. An engineer, Fletcher spent 20 years at NASA before setting up the new company. [Top Photo: Oleg Golovnev via Shutterstock]

Burger King's animal feed grown on deforested land in Brazil, Bolivia The hamburger chain Burger King has been buying animal feed grown on deforested land, according to a new report. The report states that soybeans grown to feed livestock were produced on land carved out by the burning of tropical forests in South America. Jaguars, giant anteaters and sloths have all been affected by the disappearance of this forest land. Around 1,729,738 acres of forest land is estimated to have been lost between 2011 and 2015. The environmental group Mighty Earth says evidence shows a pattern of forest-burning. Forest Burned In Favor Of Farmland To Grow Soybeans Local farmers burned the forest to grow soybeans for Burger King's suppliers Cargill and Bunge. "The connections are quite clear," said Glenn Hurowitz, the CEO of Mighty Earth. Burger King competitors McDonald's, Subway and KFC are not perfect, Hurowitz added. "If Burger King does not respond immediately to people who want to know where their food comes from, then people should shop elsewhere," Hurowitz said.