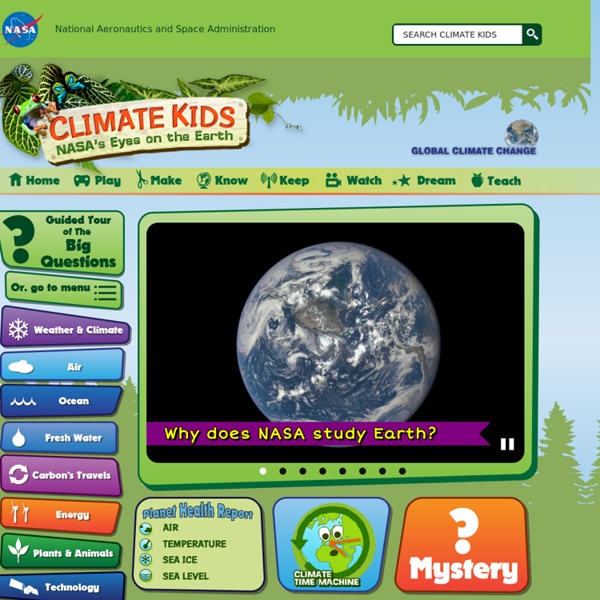 Global Warming -- National Geographic First Mammal Species Goes Extinct Due to Climate Change The humble Bramble Cay melomys has disappeared from its island in the Great Barrier Reef. Climate Change Making Calendars Run Amok People in Central Asia are recalibrating their system of time to adapt to a changing ecosystem. The Great Energy Challenge The National Geographic initiative is a call to action to become actively involved, to learn more and do more—to change how we think about and consume energy so that we can all help tackle the big energy questions. U.S.'s First Official Climate Refugees Race Against Time A Native American tribe struggles to hold on to their culture while their land slips into the Gulf of Mexico. Crocodiles and Palm Trees in the Arctic? The Arctic Is Melting.

NASA Kids' Club Skip to main content NASA Kids Club › Text Only Site Let's Go to Mars! Plan. Make a Galactic Mobile Decorate Your Space! Watch 'Ready Jet Go!' Ready Jet Go! Orion Puzzles and Coloring Sheets Print and Play. For Parents and Teachers Teach your kids and students safe surfing habits.› Children's Protection Act Learn about what you can do to protect your privacy online.› Wildfinder | Pages Find out where more than 26,000 species live on Earth. WWF’s Wildfinder is an interactive tool that visualizes the global distribution of thousands of species that roam the Earth. Ever wonder exactly where tigers roam or vultures fly? Widlfinder shows you. Using Wildfinder is easy. What will you find out about the species? In addition to detailed information about their home ecoregion, Wildfinder also displays photos of the species in the wild and whether or not current populations are in danger. Which species can be found in WildFinder? Wildfinder’s long-term goal is to include all of the species on Earth. MammalsAmphibiansReptilesBirds Search by species h Search by place h More about the Wildfinder database

Motion Math: Hungry Fish for iPhone 3GS, iPhone 4, iPhone 4S, iPhone 5, iPod touch (3rd generation), iPod touch (4th generation), iPod touch (5th generation) and iPad on the iTunes App Store Learn the Basics | A Student's Guide to Global Climate Change | US EPA Our world is always changing. Look out your window long enough, and you might see the weather change. Look even longer, and you'll see the seasons change. The Earth's climate is changing, too, but in ways that you can't easily see. The Earth is getting warmer because people are adding heat-trapping gases to the atmosphere, mainly by burning fossil fuels. The Greenhouse Effect Certain gases in the atmosphere keep the Earth warm through a process called the greenhouse effect. (<a href=".. to learn more about the greenhouse effect and how people are causing it to become stronger. Did You Know? Carbon dioxide can stay in the atmosphere for thousands of years!

Science edu games Finding out how you move and grow. Can you label the human skeleton? When you've finished move onto the animal skeletons. Do you know which groups living things belong to? Look at the plants and animals as they go past. Magnets have north poles and south poles. What does a year look like in space? The application consists of two sorting activities and one writing frame to support work towards the end of the unit. Solid, liquid and gas are called the three states of matter. Materials have different properties that make them useful for different jobs. Pupils can research information about teeth types, tooth structure and tooth decay. Use an information panel where pupils can research details about food groups and a balanced plate approach to a healthy diet.Balanced Plate lesson outline An information panel to explains the terms used in, and concepts behind, food chains. There are two labelling activities and one sorting task to support work towards the end of the unit.

ARKive - Discover the world's most endangered species Wildscreen's Arkive project was launched in 2003 and grew to become the world's biggest encyclopaedia of life on Earth. With the help of over 7,000 of the world’s best wildlife filmmakers and photographers, conservationists and scientists, Arkive.org featured multi-media fact-files for more than 16,000 endangered species. Freely accessible to everyone, over half a million people every month, from over 200 countries, used Arkive to learn and discover the wonders of the natural world. Since 2013 Wildscreen was unable to raise sufficient funds from trusts, foundations, corporates and individual donors to support the year-round costs of keeping Arkive online. Therefore, the charity had been using its reserves to keep the project online and was unable to fund any dedicated staff to maintain Arkive, let alone future-proof it, for over half a decade. Therefore, a very hard decision was made to take the www.arkive.org website offline in February 2019.

NASA Targets ‘Climate Kids’ With New Global Warming Website NASA, the government agency that put a man on the moon and sent robots to Mars, is turning its focus around and working on spreading information among the public about the earth’s apparent impending doom. A new agency website dubbed “Climate Kids” has “NASA’s eyes on the earth.” The website specifically targets young kids with games, movies and other interactive tools that present debated theories as facts. For instance: Additionally, the website tells kids that dinosaurs are in their gas tanks and that polar bears are dying as a result. ClimateQuotes.com reports: These are obviously two very contentious points with only one side presented. The planet is warming up fast–faster than at any time scientists know about from their studies of Earth’s entire history. This is flatly untrue. The site also tackles issues like the greenhouse effect, effects on wildlife (like the polar bear), ocean acidification, and offers kids advice to answer the question, “What can we do to help?”

Antarctic Plants The Antarctic mainland is relatively poor in plant life, and the species that occur there have to survive extreme conditions on the very few ice-free pieces of land. There are no trees or shrubs in the Antarctic, and only two flowering plant species, the Antarctic hair grass (Deschampsia antarctica) and the Antarctic pearlwort (Colobanthus quitensis), which grow on the Antarctic Peninsula and some Antarctic islands (1) (3). Most of the terrestrial plant life of the Antarctic consists of lower plant groups, such as mosses, liverworts and lichens. Lichens and some mosses can be found growing even on windswept, dry rock surfaces, and are well adapted to survive the harsh climate (1) (2) (3). Although poor in higher plants, the Antarctic does support single-celled algae, which grow both on land and in the ocean, where they contribute to the ‘phytoplankton’ that are an important part of the marine food chain (1). Mammals Birds The Antarctic region has few endemic terrestrial birds.

A magical meter and friendly competition help one community dial back energy use The Island Energy Dashboard gives residents a real-time look at how much electricity they’re sucking from the grid. When Puget Sound Energy announced plans to build a new substation to meet rising electricity demand on Bainbridge Island, Wash., in 2009, it apparently didn’t know who it was dealing with. Bainbridge is a well-to-do suburb of Seattle (a 35-minute ferry ride will drop you right in downtown), and home to more than a few techies, computer programmers, and folks who have letterhead with lots of fancy degrees in front of their names. Eric Rehm, a software-engineer-turned-marine-biologist, says that “a mosh pit of community organizations” came out to community meetings to discuss the electric company’s proposal. Rather than cutting down a bunch of trees to enable the island to use more electricity, they wondered, “Can we just use less?” For those who don’t obsess over the energy dashboard day in and day out, Positive Energy has installed dashboards all over the island.

Wildfinder | Pages Find out where more than 26,000 species live on Earth. WWF’s Wildfinder is an interactive tool that visualizes the global distribution of thousands of species that roam the Earth. Ever wonder exactly where tigers roam or vultures fly? Widlfinder shows you. Using Wildfinder is easy. What will you find out about the species? In addition to detailed information about their home ecoregion, Wildfinder also displays photos of the species in the wild and whether or not current populations are in danger. Which species can be found in WildFinder? Wildfinder’s long-term goal is to include all of the species on Earth. MammalsAmphibiansReptilesBirds Search by species h Search by place h More about the Wildfinder database