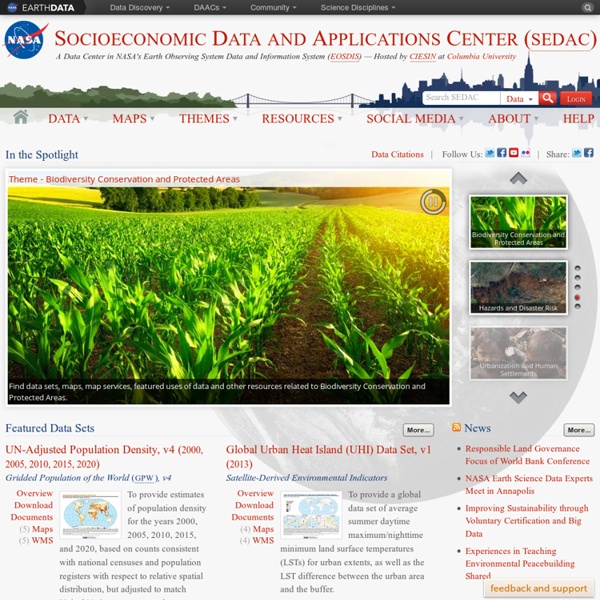 Sources of global open data at national, regional and city levels: links to public databases This page lists in one place the authoritative sources of freely available, global open data on a wide range of topics - from Agriculture to Urban Development. Most international country-level data is collected by specialized agencies of the United Nations (such as WHO for health data), and other intergovernmental organizations such as OECD. World Bank Data and UNdata are the two "one-stop" sources of country-level data collected from multiple sources. If you cannot find what you are looking for there, you may find what you need in the list of data sources below. You may also wish to go to the original data source to ensure you have the most recent data. Finding global data is often a daunting task.

Map Collection - World Sites Atlas World Atlas A physical and a political map of the world, divided into tiles for easy navigation. Maps of Continents and Regions Select a continent or region below to jump to its map. Cartographic Boundary Files What Are They? The cartographic boundary files are simplified representations of selected geographic areas from the Census Bureau’s MAF/TIGER geographic database. These boundary files are specifically designed for small scale thematic mapping. Generalized boundary files are clipped to a simplified version of the U.S. outline. As a result, some off-shore areas may be excluded from the generalized files. A simplified U.S. outline is available for download for reference (500k, 5m, 20m). The World Factbook The Office of Public Affairs (OPA) is the single point of contact for all inquiries about the Central Intelligence Agency (CIA). We read every letter, fax, or e-mail we receive, and we will convey your comments to CIA officials outside OPA as appropriate. However, with limited staff and resources, we simply cannot respond to all who write to us. Contact Information Submit questions or comments online

data - Are there any free administrative boundaries available as shapefiles? - GIS - Stack Exchange current community your communities Sign up or log in to customize your list. more stack exchange communities Stack Exchange maps home page Down to: 6th to 15th Centuries | 16th and 19th Centuries | 1901 to World War Two | 1946 to 21st Century The Ancient World ... index of places Aegean Region, to 300 BCE Aegean Region, 185 BCE Africa, 2500 to 1500 BCE Population Project Homepage Contents Global Demography Project Population Data for Africa UNEP/CGIAR Initiative - Pop data for Asia List of forms of government Government of any kind currently affects every human activity in many important ways. For this reason, political scientists generally argue that government should not be studied by itself; but should be studied along with anthropology, economics, history, philosophy, science, and sociology. Political science Etymology From Middle English government,[citation needed] from Old French government[citation needed] (French gouvernement), from Latin gubernatio ("management, government").

Data The United Nations Statistics Division (UNSD) of the Department of Economic and Social Affairs (DESA) launched a new internet based data service for the global user community. It brings UN statistical databases within easy reach of users through a single entry point. WMO data provide the basis for better understanding the climatology of severe weather and extreme events such as tropical cyclones, El Niño, floods, heat waves, cold waves, droughts and other natural hazards, contributing to saving both lives and property, and improving our understanding and monitoring of the climate system and environment. WMO has drawn attention to issues of major concern, such as ozone layer depletion, global warming, climate change and diminishing water resources. WMO enhances the application of meteorological and hydrological information for the security and well-being of society.