Scientific evidence for survival of consciousness after death 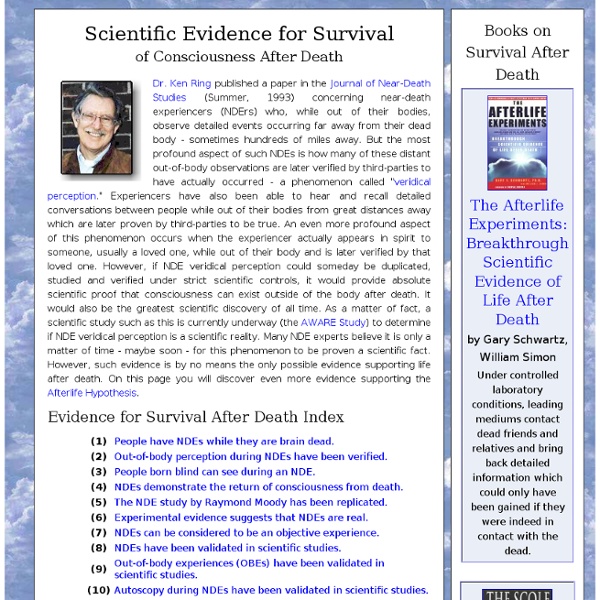 According to Wikipedia.org, "psychometry" is a psychic ability in which the user is able to relate details about the past condition of an object or area, usually by being in close contact with it. The user could allegedly, for example, give police precise details about a murder or other violent crime if they were at the crime scene or were holding the weapon used. About.com's Paranormal Phenomena website lists information about several of the most convincing psychometrists. Stefan Ossowiecki, a Russian-born psychic, is one of the most famous psychometrists. Ossowiecki claimed to be able to see people's auras and to move objects through psychokinesis. His psychic gifts enabled this chemical engineer to locate lost objects and missing people, and he assisted in several criminal investigations. In later experiments, Ossowiecki performed remarkable psychometric feats with archeological objects - a kind of psychic archeology.

PARAPSYCHOLOGY AND SURVIVAL AFTER DEATH - PSYCHICAL RESEARCH - LIFE-AFTER-DEATH - SURVIVAL - HEREAFTER - APPARITIONS - OBE - NDE - PHYSICAL PHENOMENA When the Society for Psychical Research (S.P.R.) was founded in 1882 research into phenomena and experiences suggesting personal survival of man after death took a high priority. Its findings were constantly under fire from the scientific establishment, which frowned even upon the notion psychical research being considered a science - after all paranormal phenomena did not exist at all! A belief still cherished. Investigators of the S.P.R. became so influenced by these attacks and were so eager to find favour in the eyes of their antagonists that they began to take over their condemning attitude. A common psychological trait - the oppressed identifying themselves with the worst characteristics of their tormentors.

Philosophical zombie A philosophical zombie or p-zombie in the philosophy of mind and perception is a hypothetical being that is indistinguishable from a normal human being except in that it lacks conscious experience, qualia, or sentience.[1] For example, a philosophical zombie could be poked with a sharp object, and not feel any pain sensation, but yet, behave exactly as if it does feel pain (it may say "ouch" and recoil from the stimulus, or tell us that it is in intense pain). Types of zombie[edit] Though philosophical zombies are widely used in thought experiments, the detailed articulation of the concept is not always the same. P-zombies were introduced primarily to argue against specific types of physicalism such as behaviorism, according to which mental states exist solely as behavior: belief, desire, thought, consciousness, and so on, are simply certain kinds of behavior or tendencies towards behaviors. Zombie arguments[edit] The above is a strong formulation of the zombie argument.

The Nature of Consciousness: How the Internet Could Learn to Feel - Steve Paulson "Romantic reductionist" neuroscientist Christof Koch discusses the scientific side of consciousness, including the notion that all matter is, to varying degrees, sentient. If you had to list the hardest problems in science -- the questions even some scientists say are insoluble -- you would probably end up with two: Where do the laws of physics come from? How does the physical stuff in our brains produce conscious experience? Even though philosophers have obsessed over the "mind-body problem" for centuries, the mystery of consciousness wasn't considered a proper scientific question until two or three decades ago.

Culture Vaults : Resonant Frequencies and the Human Brain One of the great revelations of 20th century science is that all existence can be broken down into simple wave functions. Every photon, energy emission, and elementary particle rings with its own unique wave signature. When we see a color, we are actually seeing a distinct frequency of visible light. When we hear a sound, our eardrums are actually being vibrated by subtle waves in the air molecules around us. Even the neurochemical processes of human consciousness ­ our very thoughts ­ ring with their own distinct wave patterns.

The brain’s silent majority - 2009 FALL When you have no clue, call it glue. “Glia,” the Greek word for glue, was the name the pathologist Rudolph Virchow gave, back in 1856, to the gelatinous substance that forms the bulk of the brain. And it stuck. These days, scientists use it to denote the matter that accounts for 90 percent of the brain’s cells and more than half its volume — but, like the late comic Rodney Dangerfield, “can’t get no respect.” Neurons, the “talented tenth” of the human brain that hog the lion’s share of brain scientists’ attention, are indeed a work of evolutionary art. 100 Ways To Become More Conscious: How To Raise Your Consciousness 1. Connect with nature – Go for a walk in the forest, jungle, field of daisies, or wherever you feel like getting a connection with nature. It is possible to feel at deep sense of peace and oneness when you attempt to connect with nature.

Table of contents (With last update date) Cover Foreword (August 13, 2009) Part 1. Quantum theory and consciousness Higher consciousness Higher consciousness is the consciousness of a higher Self, transcendental reality, or God. It is "the part of the human being that is capable of transcending animal instincts". The concept developed in German Idealism, and is a central notion in contemporary popular spirituality. Thoughts on Consciousness So yesterday, I went to a lecture about consciousness by a neuroscientist called Murray Shanahan, from Imperial College. It was about how consciousness is constructed within the brain, how networks of neurons connect together to create hierarchies of thought and other such clever stuff. To be honest, most of it went right over my head. Total mindfuck.