Facing Up to the Problem of Consciousness 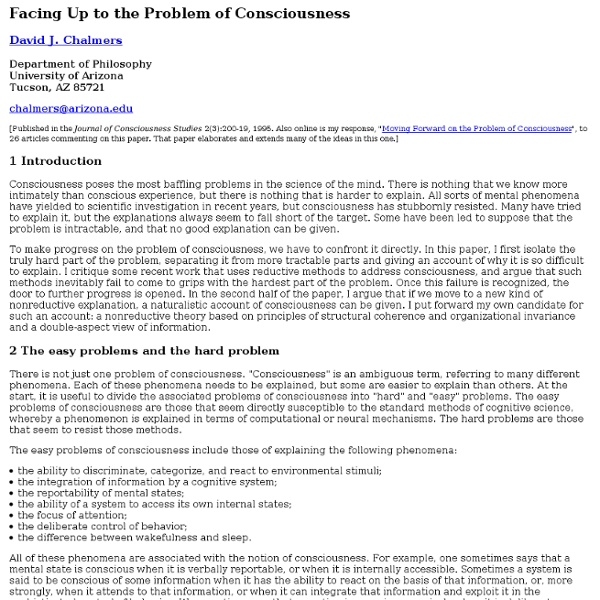 Moving Forward on the Problem of Consciousness David J. Chalmers Department of Philosophy University of Arizona Tucson, AZ 85721 chalmers@arizona.edu Published in the Journal of Consciousness Studies 4(1):3-46. This paper is a response to the commentaries in the Journal of Consciousness Studies on my paper "Facing Up to the Problem of Consciousness." The 26 commentaries (with links to online versions when they exist) were by Bernard Baars, Douglas Bilodeau, Patricia Churchland, Tom Clark, C.J.S. I am very grateful to all the contributors to this symposium for their thoughtful comments. When I wrote my paper, I had no idea that it would be subject to such close analysis. Because of the unexpected influence of the "hard problem" formulation, I have occasionally received far more credit than I deserve. The papers in the symposium are divided fairly evenly into those that take issue with aspects of my analysis, and those that provide positive approaches of their own. The reply has three main parts. 2.1 Deflationary analogies

What's your sign? Discover the world of signs and symbolic meanings. The Holographic Brain Daniel Goleman: History tells us that, with every paradigm shift in science, a new frontier of legitimate investigation opens. And from that new frontier come answers to questions the old paradigm did not allow to be asked. It seems to me you're posing questions that have not been allowed before a precarious position. Karl Pribram: Let me tell you how I got into the holographic story. Back in the 1950s, people dealing with the brain and those dealing with mental processes weren't together. For one thing, brain science was plagued by some classic, unsolved mysteries. Experiments had been done showing that just 2 percent of the fibers in a particular system would retain that system's functions. Thus, for over half a century, physiologists have searched for an “engram”—a change in brain cells that marks a memory trace. Goleman: What are the other classic puzzles of brain science? Goleman: Where have puzzles like that led you? Pribram: Ideas started to come together in the mid 60s.

Humanity’s Next God: You? In a recent article in The Economist, futurist Paul Saffo claims humanity’s overdue for a new god. He points out that throughout history, great new religions took shape during times characterized by uncertainty and social unrest, combined with an ability to spread compelling new ideas and world views virally. And here we are today, he says, equipped with the Web as our communication channel, and a cultural climate bubbling with that same potential for something new to emerge. The article ends there, with only an image of worshippers gathered around an iPad to suggest where we might be placing our faith next. It was just a prompt, but it’s made me wonder.. is this where we’re headed? Will the next “great” mythology be a story about how technology is going to save us? If a new zeitgeist were to capture the minds of billions, what might it look like? Perhaps it’s time to advance our collective story. We continue to grow more connected, more informed, more intelligent, and more dangerous.

The Mystery Behind Anesthesia Going under: Emery Brown’s quest to understand how anesthesia affects the brain could ­provide crucial clues about what goes wrong in certain ­disorders. A video screen shows a man in his late 60s lying awake on an operating table. Just outside the camera’s view, a doctor is moving his finger in front of the man’s face, instructing him to follow it back and forth with his eyes. As an anesthesiologist at Massachusetts General Hospital (MGH), Brown is constant witness to one of the most profound and mysterious feats of modern medicine. But though doctors have been putting people under for more than 150 years, what happens in the brain during general anesthesia is a mystery. Brown, who is also a neuroscientist and professor at MIT, aims to transform anesthesia from a solely clinical tool into a powerful instrument for studying the most basic questions about the brain. Brown, however, has a different perspective from most anesthesiologists; he’s also a statistician.

Twitter’s Intelligent, Welcome to Web 3.0 “Collective Intelligence (CI) is the capacity of human collectives to engage in intellectual cooperation in order to create, innovate, and invent.” - Pierre Levy + James Surowiecki + Mark Tovey I wrote a post a few days ago, Is Twitter a Complex Adaptive System?, that proposed the idea that Twitter may be evolving into an entity of sorts, a collective intelligence. I’ve come across some new posts that are amplifying that meme, and I just want to keep the thoughtstream going. Insight #1 I was reading an article by Nova Spivack from 2006 over on Ray Kurzweil’s site, titled The Third-Generation Web is Coming. He also lays out the key technology trends driving the evolution. Sound familiar? Insight #2 Then this article from ReadWriteWeb passed through my tweetstream, The Future is all about Context: The Pragmatic Web. Then she goes into a different direction, talking about business models and Facebook. Insight #3 I then found this article by Dean Pomerleau, titled Twitter and the Global Brain.

The Gnosis Archive: Resources on Gnosticism and Gnostic Tradition What is Gnosticism? Many visitors have requested some basic introductory material explaining Gnosticism. To meet this need we offer these "places to start": two short articles, The Gnostic World View: A Brief Summary of Gnosticism and What is a Gnostic?; and an audio lectures (mp3 format) on the Gnostic concept of Christ: The Misunderstood Redeemer. A reading of the Overview of the Gnostic Society Library collection will also give a useful brief introduction to the history and textual legacy of the Gnostic tradition. Meditations Take a moment to reflect on a brief meditation and reading from the Gnostic scriptures, selected from this week's Gnostic liturgy. The Gnostic Society Library Visit the Gnostic Society Library, a comprehensive library of Gnostic scriptures, which includies the complete Nag Hammadi library of Gnostic texts and other ancient writings and documents relating to Gnostic tradition. Documentary films: Nag Hammadi Library collection updated: Gnosis and C. "C.G. C. C.