Dan Dennett on our consciousness 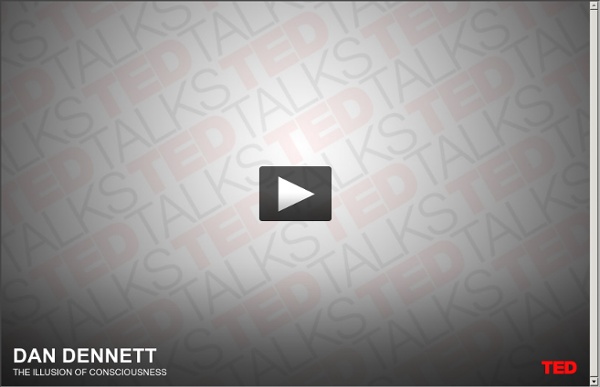 Here's How People Look at Your Facebook Profile When potential dates, employers and friends glance at your online social profiles, what do they see? EyeTrackShop, a startup that runs eye-tracking studies for advertisers, helped Mashable find out by applying its technology to the profile pages of popular social networks. The study used the webcams of 30 participants to record their eye movements as they were shown profile pages from Facebook, Google+, LinkedIn, Flickr, YouTube, Klout, Reddit, Digg, Tumblr, Twitter, StumbleUpon and Pinterest at 10-second intervals. What participants looked at on each page and in what order is recorded in the images below.

axioms - StumbleUpon Contents Contents | rgb Home | Philosophy Home | Axioms | Other Books by rgb: | The Book of Lilith | Axioms is a work that explores the true nature of human knowledge, in particular the fundamental nature of deductive and inductive reasoning. 99 Useful Resources for Graphic Designers Articles September 27, 2007 I have used every one of these resources as a graphic designer and website developer and have hand picked all of these resources based on their usefulness and overall quality. I hope you find these resources as useful as I do! Enjoy!Organizations 'At least it'll be exciting': Survivalist made chilling video before killing wife, daughter Video recorded by survivalist Peter Keller reveals his mindset before he killed his wife and daughter then committed suicide. Msnbc.com's Dara Brown reports. By msnbc.com news services BURIEN, Wash. -- Before he killed his wife and teen daughter and retreated to a remote bunker in Washington's Cascade Mountains, Peter Keller recorded a chilling video explaining his mindset: He was bored. "It's getting to the point where just trying to live and pay bills and live as a civilian and go to work, that just freaks me out," the 41-year-old survivalist said in a video clip released Thursday by the King County Sheriff's Office. "It's actually more comfortable for me to think about living out here, robbing banks and pharmacies, just taking what I want for as long as I can.

64 Things Every Geek Should Know « Caintech.co.uk If you consider yourself a geek, or aspire to the honor of geekhood, here’s an essential checklist of must-have geek skills. The term ‘geek’, once used to label a circus freak, has morphed in meaning over the years. What was once an unusual profession transferred into a word indicating social awkwardness. As time has gone on, the word has yet again morphed to indicate a new type of individual: someone who is obsessive over one (or more) particular subjects, whether it be science, photography, electronics, computers, media, or any other field.

Friedrich Nietzsche (Stanford Encyclopedia of Philosophy) - StumbleUpon 1. Life: 1844–1900 In the small German village of Röcken bei Lützen, located in a rural farmland area southwest of Leipzig, Friedrich Wilhelm Nietzsche was born at approximately 10:00 a.m. on October 15, 1844. Moss Graffiti—Next Big Thing This is the kind of thing they can't buff, and if "they" can, then we don't know how. We are talking about Moss Graffiti, and if you play your cards right, this is what you can be doing tonight to really "green" up the neighborhood. This is why we read Popular Mechanics. DIY at its finest.

Phantoms in the Brain The writings of Oliver Sacks and others have shown us that we can learn much about ourselves by looking closely at the deficits shown by people with neurological problems. V.S. Ramachandran has seen countless patients suffering from anosognosia, phantom limb pain, blindsight, and other disorders, and he brings a remarkable mixture of clinical intuition and research savvy to bear on their problems. He is one of the few scientists who are able and willing to explore the personal, subjective ramifications of his work; he rehumanizes an often too-sterile field and captures the spirit of wonder so essential for true discovery. Phantoms in the Brain is equal parts medical mystery, scientific adventure, and philosophical speculation. Watch the full documentary now (playlist - 1 hour, 39 minutes)

Programming Language Checklist Programming Language Checklist by Colin McMillen, Jason Reed, and Elly Jones. You appear to be advocating a new: [ ] functional [ ] imperative [ ] object-oriented [ ] procedural [ ] stack-based [ ] "multi-paradigm" [ ] lazy [ ] eager [ ] statically-typed [ ] dynamically-typed [ ] pure [ ] impure [ ] non-hygienic [ ] visual [ ] beginner-friendly [ ] non-programmer-friendly [ ] completely incomprehensible programming language. Your language will not work. Here is why it will not work. Existence (Stanford Encyclopedia of Philosophy) - StumbleUpon First published Wed Oct 10, 2012 Existence raises deep and important problems in metaphysics, philosophy of language, and philosophical logic. Many of the issues can be organized around the following two questions: Is existence a property of individuals? and Assuming that existence is a property of individuals, are there individuals that lack it? What does it mean to ask if existence is a property? A full answer to this question requires a general theory of properties, which is well beyond the scope of this article.

The Benjamin Franklin Effect « You Are Not So Smart#more-1459 The Misconception: You do nice things for the people you like and bad things to the people you hate. The Truth: You grow to like people for whom you do nice things and hate people you harm. Benjamin Franklin knew how to deal with haters. Born in 1706 as the eighth of 17 children to a Massachusetts soap and candlestick maker, the chances Benjamin would go on to become a gentleman, scholar, scientist, statesman, musician, author, publisher and all-around general bad-ass were astronomically low, yet he did just that and more because he was a master of the game of personal politics. Like many people full of drive and intelligence born into a low station, Franklin developed strong people skills and social powers. All else denied, the analytical mind will pick apart behavior, and Franklin became adroit at human relations.

The World As I See It - StumbleUpon "How strange is the lot of us mortals! Each of us is here for a brief sojourn; for what purpose he knows not, though he sometimes thinks he senses it. But without deeper reflection one knows from daily life that one exists for other people -- first of all for those upon whose smiles and well-being our own happiness is wholly dependent, and then for the many, unknown to us, to whose destinies we are bound by the ties of sympathy. A hundred times every day I remind myself that my inner and outer life are based on the labors of other men, living and dead, and that I must exert myself in order to give in the same measure as I have received and am still receiving... "I have never looked upon ease and happiness as ends in themselves -- this critical basis I call the ideal of a pigsty. The ideals that have lighted my way, and time after time have given me new courage to face life cheerfully, have been Kindness, Beauty, and Truth.

The naturalist theory of consciousness is not the only one and its something Hawkins and Dennett are struggling to answer because its one of the most pervasive and unsettling ones in Philosophy. His book "consciousness explained" is a long way from ending the debate. Dennett is an excellent writer, however. by vatterspun Dec 8

Dan Dennett argues that each person should give up his beliefs about being an expert about his/her own consiousness. He shows that the mind does tricks without you being aware how it does them. Dennett's argument supports Hawkins's case for giving up common misconceptions to form a theory of mind. by kaspervandenberg Dec 8