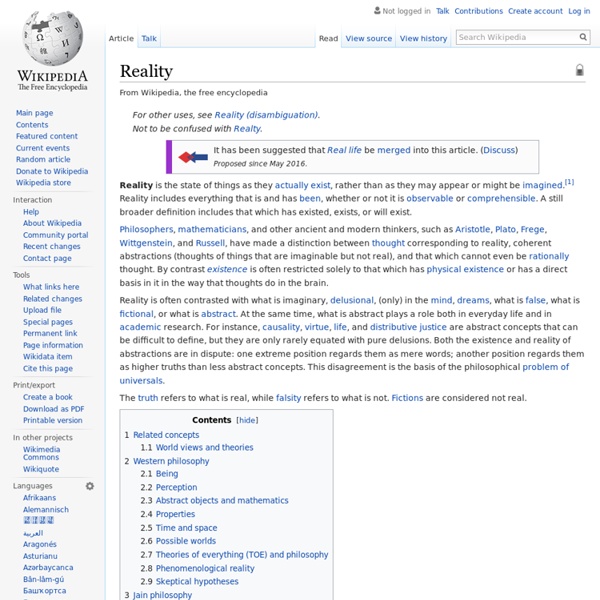 Not to be confused with Realty. Philosophers, mathematicians, and other ancient and modern thinkers, such as Aristotle, Plato, Frege, Wittgenstein, and Russell, have made a distinction between thought corresponding to reality, coherent abstractions (thoughts of things that are imaginable but not real), and that which cannot even be rationally thought. By contrast existence is often restricted solely to that which has physical existence or has a direct basis in it in the way that thoughts do in the brain. Reality is often contrasted with what is imaginary, delusional, (only) in the mind, dreams, what is false, what is fictional, or what is abstract. At the same time, what is abstract plays a role both in everyday life and in academic research. For instance, causality, virtue, life, and distributive justice are abstract concepts that can be difficult to define, but they are only rarely equated with pure delusions. The truth refers to what is real, while falsity refers to what is not. Being Related:  The problems with philosophy • Science

Being As an example of efforts in recent times, Heidegger (who himself drew on ancient Greek sources) adopted German terms like Dasein to articulate the topic.[1] Several modern approaches build on such continental European exemplars as Heidegger, and apply metaphysical results to the understanding of human psychology and the human condition generally (notably in the Existentialist tradition). By contrast, in mainstream Analytical philosophy the topic is more confined to abstract investigation, in the work of such influential theorists as W. V. "How comes the world to be here at all instead of the nonentity which might be imagined in its place? The substantial being[edit] Being and the substance theorists[edit] Aristotle knew of this tradition when he began his Metaphysics, and had already drawn his own conclusion, which he presented under the guise of asking what being is:[3] Aristotle's theory of act and potency[edit] The transcendental being[edit] St. The transcendentals[edit] Hobbes said:[14]

Becoming (philosophy) In philosophy, the concept of becoming was born in eastern ancient Greece by the philosopher Heraclitus of Hephesus, who in the Sixth century BC, said that nothing in this world is constant except change and becoming. His theory stands in direct contrast to Parmenides, another Greek philosopher, but from the italic Magna Grecia, who believed that the ontic changes or "becoming" we perceive with our senses is deceptive, and that there is a pure perfect and eternal being behind nature, which is the ultimate truth. In philosophy, the word "becoming" concerns a specific ontological concept, which should not be confused with the process philosophy, the latter indicating a metaphysical doctrine of theology. Heraclitus (c. 535 - c. 475 BC) spoke extensively about becoming. Shortly afterwards Leucippus of Miletus similarly spoke of becoming as the movement of atoms. Clemens Alexandrinus (Stromata, v, 105). Online The materialistic becoming The becoming of stars Becoming in modern physics's A.

Object From Wikipedia, the free encyclopedia Jump to navigationJump to search Object may refer to: General meanings[edit] Science, technology, and mathematics[edit] Computing[edit] Mathematics[edit] Object (mathematics), an abstract object arising in mathematicsGroup object, a generalization of a group built on more complicated structures than setsObject, an entity treated by mathematical category theory Physics[edit] Physical body or object, in physics, an identifiable collection of matter Planetary object, any secondary body in the Solar system that has a planet-like geology Other sciences[edit] Arts and media[edit] Other uses[edit] Object (National Register of Historic Places), a classification used by the U.S. See also[edit]

Wave function collapse Process by which a quantum system takes on a definitive state In 1927, Werner Heisenberg used the idea of wave function reduction to explain quantum measurement.[5] However, if collapse were a fundamental physical phenomenon, rather than just the epiphenomenon of some other process, it would mean nature was fundamentally stochastic, i.e. nondeterministic, an undesirable property for a theory.[2][6][7] This issue remained until quantum decoherence entered mainstream opinion after its reformulation in the 1980s.[2][4][8] Decoherence explains the perception of wave function collapse in terms of interacting large- and small-scale quantum systems.[9] Mathematical description[edit] Mathematical background[edit] The quantum state of a physical system is described by a wave function (in turn—an element of a projective Hilbert space). The kets Where represents the Kronecker delta. The coefficients c1, c2, c3... are the probability amplitudes corresponding to each basis . The process[edit] , that is: . .

Existence Ontology is the philosophical study of the nature of being, existence or reality in general, as well as of the basic categories of being and their relations. Traditionally listed as a part of the major branch of philosophy known as metaphysics, ontology deals with questions concerning what entities exist or can be said to exist (for instance: "Does UDFj-39546284 exist?"), and how such entities can be grouped, related within a hierarchy, and subdivided according to similarities and differences. A lively debate continues about the existence of God. Epistemology studies criteria of truth, defining "primary truths" inherently accepted in the investigation of knowledge. The first is existence. Materialism holds that the only thing that exists is matter, that all things are composed of material, and all phenomena (including consciousness) are the result of material interactions. Etymology[edit] Historical conceptions[edit] Early modern philosophy[edit] Predicative nature[edit] Semantics[edit]

Existence The ability of an entity to interact with physical or mental reality Etymology[edit] The term existence comes from Old French existence, from Medieval Latin existentia/exsistentia.[3] Context in philosophy[edit] Materialism holds that the only things that exist are matter and energy, that all things are composed of material, that all actions require energy, and that all phenomena (including consciousness) are the result of the interaction of matter. In scholasticism, existence of a thing is not derived from its essence but is determined by the creative volition of God, the dichotomy of existence and essence demonstrates that the dualism of the created universe is only resolvable through God.[2] Empiricism recognizes existence of singular facts, which are not derivable and which are observable through empirical experience. Historical conceptions[edit] The Neo-Platonists and some early Christian philosophers argued about whether existence had any reality except in the mind of God.

Metaphysics Metaphysics is a traditional branch of philosophy concerned with explaining the fundamental nature of being and the world that encompasses it,[1] although the term is not easily defined.[2] Traditionally, metaphysics attempts to answer two basic questions in the broadest possible terms:[3] Ultimately, what is there?What is it like? Prior to the modern history of science, scientific questions were addressed as a part of metaphysics known as natural philosophy. Etymology[edit] However, once the name was given, the commentators sought to find intrinsic reasons for its appropriateness. There is a widespread use of the term in current popular literature which replicates this understanding, i.e. that the metaphysical equates to the non-physical: thus, "metaphysical healing" means healing by means of remedies that are not physical.[8] Central questions[edit] Cosmology and cosmogony[edit] Cosmogony deals specifically with the origin of the universe. Determinism and free will[edit] [edit] [edit] [edit]