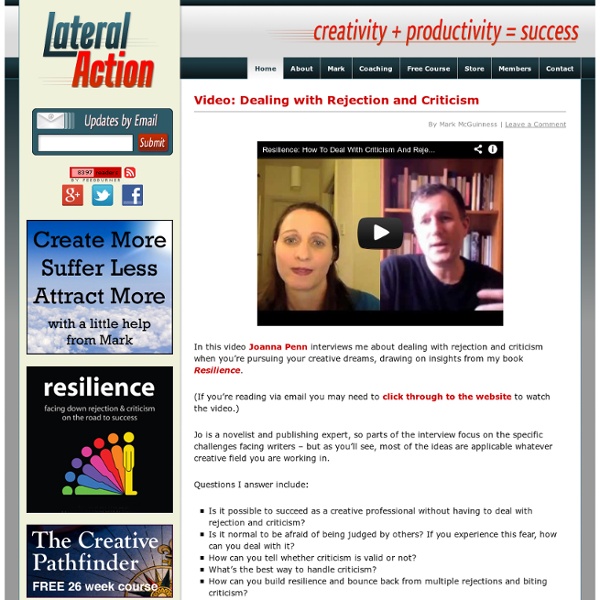 43 Folders | Time, Attention, and Creative Work The Myth of Multitasking: How "Doing It All" Gets Nothing Done (9780470372258): Dave Crenshaw Art Heroes Radio When it comes to movies, most of us "pay no attention to the man behind the curtain." We follow the stars and often directors, but rarely does the producer of a film get to be in the spotlight. But in many ways, the producer of a film is the one person most central to the creation— from choosing a screenplay, to hiring key personnel, to facilitating the millions of details large and small required to successfully coordinate a large number of creatives and technicians. Behind the scenes is a fascinating world where creativity, skill, structure and logistics all must work together to create the finished product. Dean Zanuck was the perfect guy to ask. We also talked about Dean's focus on original stories and narrative, and the idea of producing a career in the arts as though it were a Hollywood film.

Fun Life Development — Making personal development fun That is by far the most common question I get asked by readers. Over the past few years, I have narrowed the answer down to three main elements: The fundamentals of living with passionAligning with your core valuesFinding your life purpose They’re all related, but distinct. And only all three together will make you feel truly alive. But when you do get them handled… you will feel a deep sense of satisfaction, running like a thread throughout your days. Finding your passion – a metaphor Imagine for a second that your life is a sailing ship. A ship that has found its passion is one that is gliding strongly through the waves, with wind in its sails, having a clear destination and steering towards it. But if one or more of the elements are missing, the ship will just rock in the waves in one spot, or even start to sink. The three elements break down as follows: The fundamentals for a ship are having a water-tight hull, a deck and a mast. How to find your passion in life

The Multitasking Myth (Ashgate Studies in Human Factors for Flight Operations) (9780754679974): Loukia D. Loukopoulos, R. Key Dismukes, Immanuel Barshi NOTES ON WRITING AND DRAWING by Austin Kleon - Part 16 A writer’s personality is his manner of being in the world: his writing style is the unavoidable trace of that manner. When you understand style in these terms, you don’t think of it as merely a matter of fanciful syntax, or as the flamboyant icing atop a plain literary cake, nor as the uncontrollable result of some mysterious velocity coiled within language itself. Rather, you see style as a personal necessity, as the only possible expression of a particular human consciousness. Style is a writer’s way of telling the truth. Now THAT’S something they don’t teach you in creative writing class. Style is a trace of the writer’s personality. And writing with pictures is no different. This is why I return to people’s writing and writing with pictures: to read what they have to say. But what IS this way of being? It’s also about what we read and what allies we choose to make. [W]riting is the craft that defies craftsmanship: craftsmanship alone will not make a novel great.

Mihaly Csikszentmihalyi – Does Creativity Make You Happy? Pin It One of my favourite writers on creativity is the psychologist Mihaly Csikszentmihalyi. In this video of his TED talk, he explains the concept of flow for which he is famous. Flow is his answer to the question ‘What makes human beings happy?’ – ‘An almost automatic, effortless, yet highly focused state of consciousness’ that we can experience when devoting ourselves to a meaningful challenge. In one of the slides in his TED presentation, Csikszentmihalyi outlines the main characteristics of flow, which you may relate to from your own experience: How Does It Feel to Be in Flow? Bandwidth Nirvana Early in the talk, Csikszentmihalyi presents us with the following description by a leading composer, of his experience while composing music: You are in an ecstatic state to such a point that you feel as though you almost don’t exist. This sounds like a mystical experience, yet Csikszentmihalyi offers a scientific explanation. Spontaneity Takes Practice Takeaway: Practice, practice, practice!

Creative Coaching and Training | Wishful Thinking Study Hacks On Sam Harris and Stephen Fry’s Meditation Debate February 19th, 2019 · 44 comments A few weeks ago, on his podcast, Sam Harris interviewed the actor and comedian Stephen Fry. Early in the episode, the conversation took a long detour into the topic of mindfulness meditation. Harris, of course, is a longtime proponent of this practice. What sparked the diversion in the first place is when, early in the conversation, Fry expressed skepticism about meditation. Typically when we find ourselves in a chronic state of ill health it’s because we’ve moved away from something natural that our bodies have evolved to expect.Paleolithic man didn’t need gyms and diets because he naturally exercised and didn’t have access to an overabundance of bad food.Mindfulness mediation, by contrast, doesn’t seem to be replicating something natural that we’ve lost, but is instead itself a relatively contrived and complicated activity. Harris’s response was to compare meditation to reading. Read more » Myth Confirmed