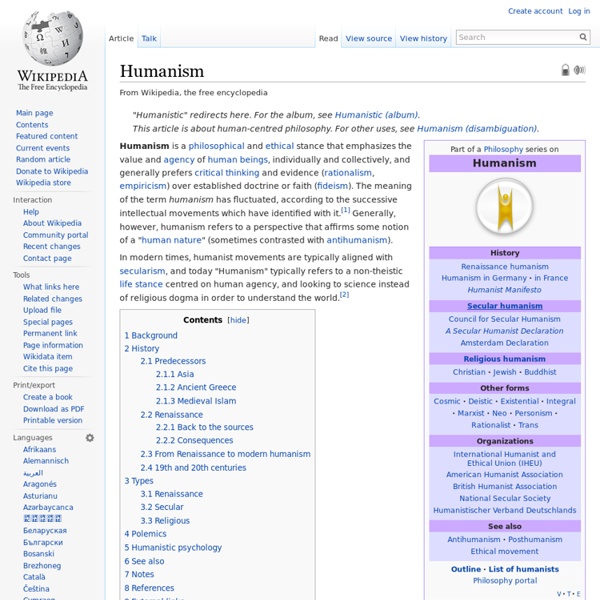 In modern times, humanist movements are typically aligned with secularism, and today "Humanism" typically refers to a non-theistic life stance centred on human agency, and looking to science instead of religious dogma in order to understand the world.[2] Background The word "Humanism" is ultimately derived from the Latin concept humanitas, and, like most other words ending in -ism, entered English in the nineteenth century. However, historians agree that the concept predates the label invented to describe it, encompassing the various meanings ascribed to humanitas, which included both benevolence toward one's fellow humans and the values imparted by bonae litterae or humane learning (literally "good letters"). In the second century A.D, a Latin grammarian, Aulus Gellius (c. 125– c. 180), complained: Gellius says that in his day humanitas is commonly used as a synonym for philanthropy – or kindness and benevolence toward one's fellow human being. History Predecessors Asia Ancient Greece Types

House of Bourbon We ask you, humbly, to help. Hi reader in Canada, if you use Wikipedia a lot, this message is for you. It's a little awkward to ask, but this Thursday we need your help. We’re not salespeople. Behaviorism Behaviorism (or behaviourism), is the science of behavior that focuses on observable behavior only,[1] it is also an approach to psychology that combines elements of philosophy, methodology, and theory.[2] It emerged in the early twentieth century as a reaction to "mentalistic" psychology, which often had difficulty making predictions that could be tested using rigorous experimental methods. The primary tenet of behaviorism, as expressed in the writings of John B. Watson, B. F.

House of Windsor The House of Windsor is the reigning royal house of the United Kingdom and the other Commonwealth realms. The dynasty is of German paternal descent and was originally a branch of the House of Saxe-Coburg and Gotha, itself derived from the House of Wettin, which succeeded the House of Hanover to the British monarchy following the death of Queen Victoria, wife of Albert, Prince Consort. The name was changed from Saxe-Coburg and Gotha to the English Windsor (from "Windsor Castle"[1]) in 1917 because of anti-German sentiment in the British Empire during World War I.[2] There have been four British monarchs of the house of Windsor to date: three kings and the present queen, Elizabeth II. During the reign of the Windsors, major changes took place in British society. The British Empire participated in the First and Second World Wars, ending up on the winning side both times, but subsequently lost its status as a superpower during decolonisation.

Civic Humanism First published Tue Oct 1, 2002; substantive revision Tue Dec 13, 2011 A variant of republicanism indicating active, participatory, patriotic citizenship as well as the ethos and educational ideal that goes with it. The term was coined in the context of the embattled Weimar Republic and its genesis is deeply marked by the traditions of German historical scholarship. House of Este The House of Este (Italian: Casa d'Este [ˈɛste]; originally House of Welf-Este) is a European princely dynasty. The elder branch of the House of Este included the dukes of Brunswick and Lüneburg and produced Britain's Hanoverian monarchs, as well as one Emperor of Russia (Ivan VI). The younger branch of the House of Este included rulers of Ferrara (1240–1597), and of Modena and Reggio (1288–1796).

Cognition Cognition is a faculty for the processing of information, applying knowledge, and changing preferences. Cognition, or cognitive processes, can be natural or artificial, conscious or unconscious.[4] These processes are analyzed from different perspectives within different contexts, notably in the fields of linguistics, anesthesia, neuroscience, psychiatry, psychology, philosophy, anthropology, systemics, and computer science.[5][page needed] Within psychology or philosophy, the concept of cognition is closely related to abstract concepts such as mind, intelligence. It encompasses the mental functions, mental processes (thoughts), and states of intelligent entities (humans, collaborative groups, human organizations, highly autonomous machines, and artificial intelligences).[3] Etymology[edit]

House of Gonzaga History[edit] The first members of the family of historical importance are known to have collaborated with the Guelph faction alongside the monks of the Polirone Abbey.[2] Starting from the 12th century they became a dominant family in Mantua, growing in wealth when their allies, the Bonacolsi, defeated the traditional familiar enemy, the Casalodi. In 1328, however, Ludovico I Gonzaga overthrew the Bonacolsi lordship over the city with the help of the Scaliger, and entered the Ghibelline party as capitano del popolo ("people's captain") of Mantua and imperial vicar of Emperor Louis IV.[3] Ludovico was succeeded by Guido (1360–1369) and Ludovico II (1369–1382), while Feltrino, lord of Reggio until 1371, formed the cadet branch of the Gonzaga of Novellara, whose state existed until 1728. Francesco I (1382–1407) abandoned the traditional alliance with the Visconti of Milan, in order to align their rising power with the Republic of Venice. St.

Empiricism John Locke, a leading philosopher of British empiricism Empiricism is a theory which states that knowledge comes only or primarily from sensory experience.[1] One of several views of epistemology, the study of human knowledge, along with rationalism and skepticism, empiricism emphasizes the role of experience and evidence, especially sensory experience, in the formation of ideas, over the notion of innate ideas or traditions;[2] empiricists may argue however that traditions (or customs) arise due to relations of previous sense experiences.[3] Empiricism, often used by natural scientists, says that "knowledge is based on experience" and that "knowledge is tentative and probabilistic, subject to continued revision and falsification."[4] One of the epistemological tenets is that sensory experience creates knowledge.

The boffins and the luvvies Eric Schmidt, the executive chairman of Google, generated headlines in the United Kingdom recently for what one major paper there called his “devastating critique” of the English education system. His remarks came in the course of delivering the prestigious MacTaggart lecture at the Edinburgh International Television Festival. While he aimed for the most part at reassuring the high-level executives in his audience that they have nothing to fear from the coming merger of the Internet with TV, Schmidt also made a point of chastising British schools for inadequately promoting technological literacy. English scientists have invented three of the most powerful technologies the world has ever seen, Schmidt said — photography, television, and computers — yet England has failed to maintain global leadership in any of those fields. A principal reason for that failure, he said, has been “a drift to the humanities” in the curricula of British schools. Related:

Maximilian I of Mexico The Empire managed to gain recognition by several European powers including Britain, Austria, and Prussia. The United States however, continued to recognize Juárez as the legal president of Mexico. Maximilian never completely defeated the Mexican Republic; Republican forces led by President Benito Juárez continued to be active during Maximilian's rule.

Structuralism In sociology, anthropology and linguistics, structuralism is the theory that elements of human culture must be understood in terms of their relationship to a larger, overarching system or structure. It works to uncover the structures that underlie all the things that humans do, think, perceive, and feel. Alternatively, as summarized by philosopher Simon Blackburn, structuralism is "the belief that phenomena of human life are not intelligible except through their interrelations. These relations constitute a structure, and behind local variations in the surface phenomena there are constant laws of abstract culture".[1] In the 1970s, structuralism was criticised for its rigidity and ahistoricism.