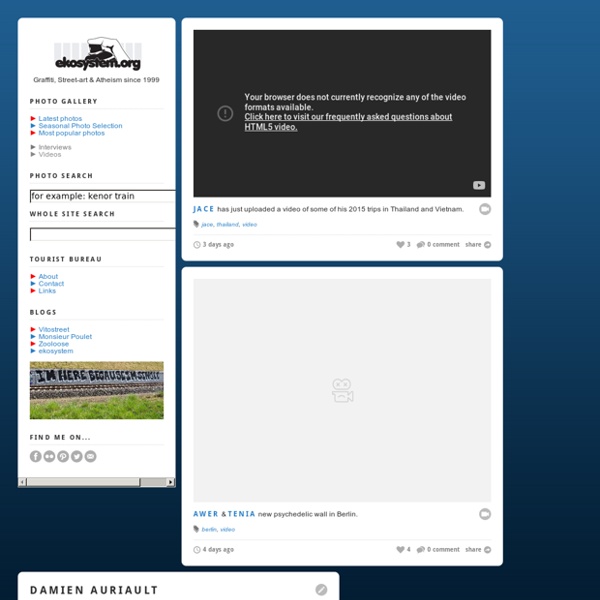 Before I Die What matters most to you Interactive public art project that invites people to share their personal aspirations in public. After losing someone she loved and falling into depression, Chang created this experiment on an abandoned house in her neighborhood to create an anonymous place to help restore perspective and share intimately with her neighbors. The project gained global attention and thanks to passionate people around the world, over 1000 Before I Die walls have now been created in over 70 countries, including Kazakhstan, Iraq, Haiti, China, Ukraine, Portugal, Japan, Denmark, Argentina, and South Africa. The walls are an honest mess of the longing, pain, joy, insecurity, gratitude, fear, and wonder you find in every community, and they reimagine public spaces that nurture honesty, vulnerability, trust and understanding.

David De La Mano New Mural In Montevideo, Uruguay StreetArtNews David De La Mano is still in Uruguay where he just completed this new piece somewhere on the streets of Montevideo. Entitled "Frontera", the Spanish artist delivers an interesting monochromatic piece featuring hundreds of his trademark silhouettes. Scroll below to get a better look at "Frontera" and be on the lookout for more updates from David De La Mano soon. More pictures after the jump.

recycled barrel planter We’ve been having the most beautiful sunny weather for the past few days here in Oakland, and it’s making me desperate to get into a garden . . . if only I had one! I’ve been planning to create a container garden for a while now, but hadn’t really found a space-saving design I liked — until this recycled barrel planter from Kate at Centsational Girl landed in my lap. Inspired by a similar planter she saw in a catalog for hundreds of dollars, Kate decided to make her own version for ten times less, using a half barrel and wood from old pallets. I love the architectural tiers, and the pre-weathered effect of both the barrel and the pallet wood. Thanks for sharing, Kate! instalaciones efimeras Conceived for the guggenheim museum, new york, james turrell’s ‘aten reign’ (2013) recasts the rotunda of the frank lloyd wright-designed building into an enormous illuminated void of shifting artificial and natural luminescence. in this, his first solo exhibition in new york since 1980, the artist continues his in depth exploration of the perception of light, color and space, re-imagining the central volume of the cultural institution as an immersive light-filled space, with strong references to his ongoing ‘roden crater project’ (1979- ). Opening on the summer solstice, turrell dramatically transforms the museum, offering a dynamic perceptual experience through the modulation of color emitted through the round chamber. Concebido para el museo Guggenheim, Nueva York, el ‘aten reign’ de James Turrell en el 2013 refunde la rotonda del edificio de Frank Lloyd Wright diseñando en un enorme vacío iluminado de luminiscencia artificial y natural cambiante.

20 awesome examples of street art If you still need a proof that art can be found anywhere, those awesome examples of great street art should convince you. Agostino Iacurci New Mural In Venice, Italy StreetArtNews While we last heard from him last March in Paris, France (covered), Agostino Iacurci recently stopped by Southern Europe to paint a quick piece in Venice, Italy. Primarily focusing on characters, the Italian artist compose larger-than-life illustrative works outdoors converting walls into storybook pages. Check back with us soon for more Street Art updates from Italy.

NY ART BOOK FAIR - About Yale School of Architecture (2013) MAST books (2013) Matt Wobensmith viewing the Boo Hooray / Division Leap Booth (2013) Fulton Ryder (2013) The Zine Tent (2013) Street Art Utopia's Best of 2011 I couldn’t help but direct everyone to fellow public art loving blog Street Art Utopia as they have compiled a pretty decent list of the best street art of 2011. If you are just getting into the wonderful world of pasting, spraying or making the streets a more creative place, this list is a great place to start (short of Wall and Piece). One of the best things about this genre is it’s diversity – you can decided what you find gimmicky/twee or meaningful and awe-inspiring. Street art has always been the public’s voice, and the art world has yielded success to those with great ideas and a call for change.

Exclusive Interview with C215 - The Shooting Gallery - The Shooting Gallery In honor of his first solo show, ‘Smoke Gets in Your Eyes,’ at the Shooting Gallery, French stencil artist C215 answered a few questions for us, providing thorough answers that not only give insight into his artistic intentions but into his personal character as well. Between studying “catholic theory of Architecture and Painting in XVIIth century, the history of Romanticism in Germany and the birth of Abstract in painting,” being a devout father to an 8 year old daughter and traveling around the world as a practicing and passionate artist it’s incredible to see that C215 still found time to create such a thoughtful solo show. Come see ‘Smoke Gets in Your Eyes,’ opening tomorrow from 7-11pm. Read the full press release and RSVP Here More After the Jump I’ve heard a few accounts of your name coming from a cell number you’ve spent too much time in. Is that referring to time in jail?

ZINES « The Flop Box Austin McManus / 30 ZINES 2013 84 pages, 8.5” x 5.5”, black & white laser printed, each cover is numbered in a different color, hand signed in an edition of 30. In an attempt to examine the bizarre and complex existence of humans and their relationship with their environment on planet earth, this large collection of thoughtfully selected photographs was compiled. All photographs were taken by Austin McManus, some close friends and classified and unclassified sources. We declare the world as our canvas More info. More info. More Banksy on Street Art Utopia. Street Artist interview: C215. By Street Art London C215′s street art represents an exploration of animals, architecture, freedom and those forgotten about by society all in incredible detail and against a backdrop of overlooked places. C215′s real name is Christian Guémy but he goes by his artistic identity, ‘C215′. He has put work up all over the world in India, Israel, Poland, the USA, Senegal, Russia, Morocco, his home-country of France and of course, London. C215 talks with Street Art London about the subjects and themes that have inspired him to become a full time artist. He tells us about Nina, his daughter, who is already becoming a street artist in her own right and he lets us in on a pretty crazy Friday afternoon stunt he pulled in the middle of London. The “C” in C215 stands for your real name – Christian – but your artistic identity also has another significance.