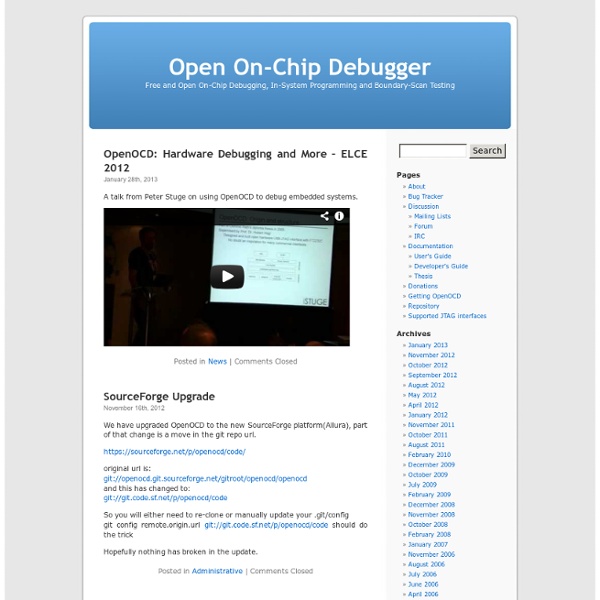 StepStick Please note: StepStick has 0.2 ohm sense resistors instead of Pololu stepper driver boards 0.05 ohm. This limits the current to 1A. See Notes on building for more info. StepStick Release status: experimental With the recent outage of Pololu stepper driver boards, I've been wanting to build my own, and break my dependency (no offense, I <3 you Pololu!). This is an Allegro A4983 / A4988 x4 breakout board for Sanguinololu. Now this is not for the iron wielding solderer. That being said, I believe this is an easy to solder board using a toaster oven or hotplate reflow method. But if you're not up to the task, stay tuned and keep an eye on this place for a published list of places where you can get this pre-assembled. The Pololu A4988 Stepper Motor Driver Carrier is produced on a 2oz copper PCB board. Another consideration is the problem of using x16 microstepping in a low-current application. Adjusting and testing the current Stepsticka4984 Design

Simple Pyro RF Transmitter (27 MHz) While it may seem like a trivial idea to create a wireless on/off switch, the design, implementation and understanding that goes into such a thing is actually much more invovled than you would first think. For many years I have wanted to build an RF transmitter and RF receiver pair from scratch but it always proved too difficult. This time things will be different! In this article we'll explore what it takes to build a simple rf transmitter at 27 mhz, the different stages that go into the transmitter, how those stages interact and we'll test it out with some measurement equipment. The ultimate goal will be to pair this transmitter with a receiver, so that when we transmit, the receiver turns on an LED. Simple Pyro RF Receiver + Transmitter (27 MHz) - Demonstration Simple Pyro RF Transmitter (27 MHz) - Project Setup Purpose & Overview Of This Project The purpose of this project is to create an RF transmitter that can send on/off pulses out of its antenna to some receiver.

Simple Pyro RF Receiver (27 MHz) Project Info Author: Chris Difficulty: Advanced Time Invested: 4 Hours Prerequisites: Take a look at the above articles before continuing to read this article. Last week we took a look at a simple rf transmitter that operated at 27 mhz. Simple Pyro RF Receiver + Transmitter (27 MHz) - Demonstration Simple Pyro RF Transmitter + Receiver Pair (27 MHz) - Project Setup Purpose & Overview Of This Project The goal of this project is to make an RF receiver front end to capture the 27 MHz signal that we're expecting, connect that to two amplifier stages and then to use the originally transmitted signal to turn an LED on.

servo101 Servos have a 3 pin connector, consisting of ground, supply voltage, and control signal. Pinouts have been known to vary by manufacturer. Servos are controlled by sending it a variable width pulse (a type of Pulse Width Modulation (PWM)). Its good to know HOW the servo controls its position, if you know this you can pull some interesting tricks, like adjusting the gain and force feedback. Inside a servo is a: Motor gearbox potentiometer control circuit The motor is attached by gears to the output shaft, which is attached to the potentiometer. As already stated, the control signal is a pulse between 1 and 2ms long. Direction of the correction can be determined from the timing of the difference pulse: - If the difference pulse occurs while the control pulse is still high, this will mean the motor has to turn, say, counterclockwise. - If the difference pulse occurs when the control pulse is low (as in after the control pulse finished), it would mean the motor has to turn, say, clockwise.

Lost Knowledge: Cable lacing The twice-monthly Lost Knowledge column explores the possible technology of the future in the forgotten ideas of the past (and those just slightly off to the side). Every other Wednesday, we look at retro-tech, “lost” technology, and the make-do, improvised “street tech” of village artisans and tradespeople from around the globe. “Lost Knowledge” was also the theme of MAKE, Volume 17 One of the cool things about doing this column is discovering lost technologies myself, things I knew nothing about before bumping into them while poking about the virtual attics and basements of cyberspace, looking for things to write about. We got such a great response to my last column on wire-wrapping (which was awhile ago, thanks to a most unwelcomed medical absence). The bundling is done with a technique called “cable lacing”. Cable lacing was cable management technique before zipties, used in the telecom industry, aerospace, marine applications, and elsewhere. More: Gareth Branwyn Related

Wiring and Cabling: How To Lace Cable Harnesses From OP 2230, "Workmanship and Design Practices for Electronic Equipment", published by the direction of the chief of the Bureau of Naval Weapons, 1 December, 1962. pp. 7-9 --- 7-14. Scanned by Gary Allsebrook. Transcribed to HTML by Jeff Dairiki. Harnesses should be located so that circuit tracing can be readily accomplished, and accessibility to parts or components which may require replacement is not limited. Individual wires of a harness should be arranged to run parallel or at right angles to each other wherever possible. Harnesses are usually fabricated on a harness jig or forming board. Conductor ends may be anchored to the board by wrapping them about nails or pegs, or may be fanned out for easier dressing if holes to accommodate wire ends are provided. A typical application for a forming board is shown below. Harness Forming Board Another method of anchoring conductor ends on a harness jig is to attach springs on the board near the termination point of the wire. A Finished Harness

Config flash - Hamsterworks Wiki! From Hamsterworks Wiki! This |FPGA Project was started and finished in October 2012 Note This will not work on all FPGA boards - you have to be able to control all the required signals to the configuration flash. For example, on the Digilent Basys2 the CS line is tied to the "done" signal, so you can't enable the flash chip. Most FPGA boards include a serial Flash chip to hold the configuration bitstream, which the FPGA loads on power up. This flash is almost always larger than the FPGA needs. You can use the excess capacity to store your own data - here's how to do it. Reading from the flash On the Papilio One, read requires Dropping the CS line Sending the read command (0x03) Sending a 24 bit address, Clocking out the data. Here is the waveform from the simulator, reading from address 0x2C000: What is needed The Papilio One-250 includes a 4Mbit flash, but only needs around 1.35Mb to for the FPGA. Two problems are faced in trying to make use of this data: bitmerge.c lights.c make.bat

Main - open-plc - OpenPLC - an open hardware alternative for automation OpenPLC is an open hardware alternative for industrial and home automation. It uses the well known ATmega chips as main processor, the same used on Arduino. This means that OpenPLC is code-compatible with all arduino sketches. The main features of the OpenPLC are: ● Protected 24V Digital Inputs (8 inputs for each module) ● Protected 24V Digital Outputs (8 inputs for each module) ● USB Communication (used for programming) ● RS-485 bus for communication between modules ● Open Source IDE with c++ programming ● Open Source IDE with Ladder programming ● Integrated Ethernet ● 16MHz ATmega2560 as main processor November 29, 2013 Finally the boards are done! We made a benchmark with a Siemens S7-200 PLC. September 9, 2013 I'm very happy to announce here that the OpenPLC Ladder is finally ready for it's first public beta! If you want to download the binary files, just click HERE. NOTE: You can upload the openplc ladder code to a standard Arduino Mega as it has the same processor of the OpenPLC May 25, 2013