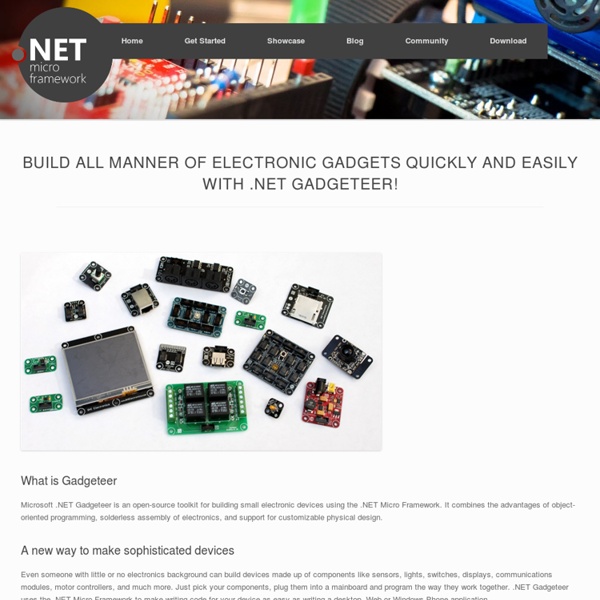 A new way to make sophisticated devices Even someone with little or no electronics background can build devices made up of components like sensors, lights, switches, displays, communications modules, motor controllers, and much more. Just pick your components, plug them into a mainboard and program the way they work together. .NET Gadgeteer uses the .NET Micro Framework to make writing code for your device as easy as writing a desktop, Web or Windows Phone application. An open source and open hardware community project If you're building projects with .NET Gadgeteer, you'll find inspiration and product information on this site. If you're interested in building .NET Gadgeteer hardware, you can find hardware interface specifications and core libraries at A variety of hardware vendors are building components for .NET Gadgeteer, so you’ll have a huge assortment of modules to choose from.

LilyPad sparkfun.com Shopping Cart 0 items log in register Concise electronics for geeks Copyright (C) 2010 by Michal Zalewski <lcamtuf@coredump.cx> There are quite a few primers on electronics on the Internet; sadly, almost all of the top hits resort to gross oversimplifications (e.g., hydraulic analogies), or convenient omission, when covering subtle but incredibly important topics such as the real-world behavior of semiconductors. There are some exceptions, to be sure - but they tend to suffer from another malady: regressions into mundane, academic rigor, complete with differential equations and complex number algebra in transient analysis - a trait that is highly unlikely to be accessible, or even useful, to hobbyists. Store — MindWave Mobile: MyndPlay Bundle MindWave Mobile: MyndPlay Bundle Designed in Silicon Valley by the world’s leading innovator of brainwave technology, the new MindWave Mobile headset is evolved for today’s mobile user. It is compatible with Apple iOS products, including iPhone, iPod Touch and iPad and Android phones and tablets. And you can double your use of the MindWave Mobile with Mac and PC compatibility. Also, another 5 bonus apps for PC/Mac are included: Brainwave Visualizer, Man.Up, ZombiePop, Meditation Journal, and the MindWave Tutorial. Main Beneﬁts MindWave Mobile is the world’s least expensive research-grade EEG headset available.

Banana Pi is a Raspberry Pi Compatible Board fitted with an AllWinner A20 SoC So you’ve got a Raspberry Pi board, an enclosure, and a few add-on boards. Your application would however do with some more processing power, or you’d like to run Android, but you don’t want to have to purchase accessories all over again for another board. Banana Pi could be the solution, as it’s apparently mechanically and electrically compatible with the Raspberry Pi, and comes with a dual core Cortex A7 AllWinner A20 SoC with 1GB RAM, a Gigabit Ethernet port, and a SATA port, among other things. Banana Pi (Click to Enlarge) Troubleshooting and Repair of Consumer Electronic Equipment Including: Test Equipment, Supplies, Parts, Incredibly Handy Widgets(tm), Sources of Information, and Where to Find Broken Stuff Version 2.47 (21-Feb-12) Reproduction of this document in whole or in part is permitted if both of the following conditions are satisfied: This notice is included in its entirety at the beginning.

The Works of Dickson Chow Plant Friends MKII Article Date: July 13th, 2014. Updated: August 4th, 2014. What is Plant Friends? Plant Friends is a plant environmental monitor system. It monitors the soil moisture, air temperature, and air humidity of your indoor plant(s) and will alert you via email and SMS when your plants are thirsty. Android Mini PC MK802 History and models[edit] MK802: Original design with A10 CPUMK802+: Uses A10s CPU with RAM increased to 1 GB[1]MK802 II: Modified form and slightly increased processor speed[2]MK802 III: A new design featuring a Rockchip RK3066, a dual-core ARM CPU (Cortex-A9 at 1.6 GHz), Mali GPU and 4 GB or 8 GB flash storage that runs Android 4.1.MK802 IIIs: Added Bluetooth support, soft power-off function and XBMC support.MK802 IV: Released in May 2013, a new design featuring a Rockchip RK3188, a quad-core ARM CPU (Cortex-A9 at 1.6 GHz), 2 GB of RAM, 400 MHz Mali GPU and 8 GB of flash storage that runs Android 4.2.[3][4] Connectors[edit] HDMImini or micro USB 2.0USB 2.0microSD slotPower via micro-USB OTG The MK802's success and design has generated a host of similar devices with similar specifications, many of which have similar model numbers, but are not manufactured by Rikomagic.

Lessons In Electric Circuits A free series of textbooks on the subjects of electricity and electronics Copyright (C) 2000-2015, Tony R. Kuphaldt These books and all related files are published under the terms and conditions of the Design Science License.

Will the $49 Android PC help bridge the digital divide? Mobile broadband is on the rise, and so is the world’s Internet user base. But that’s not the complete picture. A digital divide still exists, particularly in developing economies, where access to online resources is limited to an elite few.