Video Q&A: Clap Your Hands And Say Yeah. Ben & Jerry's @ Outside Lands. My Experience at Outside lands. Outside Lands 2011, Day One. Day Oneby Joshua Krage Sadly missed The Joy Formidable, but caught a kick-ass set from Brooklyn electro-dance rockers Phantogram at the Sutro stage. 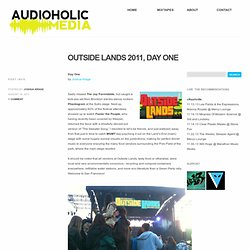 Next up, approximately 60% of the festival attendees showed up to watch Foster the People, who having recently been covered by Weezer, returned the favor with a blissfully stoned-out version of “The Sweater Song.” I decided to let’s be friends, and just walk(ed) away from that just in time to catch MGMT day-psyching it out on the Land’s End (main) stage with some hugely surreal visuals on the jumbotrons, making for perfect dinner music to everyone enjoying the many food vendors surrounding the Polo Field of the park, where the main stage resided. It should be noted that all vendors at Outside Lands, tasty food or otherwise, were local and very environmentally conscious– recycling and compost containers everywhere, refillable water stations, and more eco literature than a Green Party rally. Welcome to San Francisco! Outside Lands at San Francisco's Golden Gate Park. Follow me on Twitter RSS Feeds Home Contact About Get Craft Beers « Mr. Outside Lands, day three. Ah, Golden Gate Park on a crisp, sunny Sunday morning. 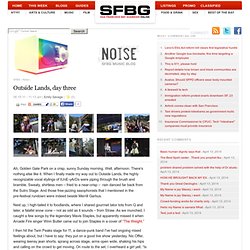 Well, afternoon. There's nothing else like it. When I finally made my way out to Outside Lands, the highly recognizable vocal stylings of tUnE-yArDs were piping through the brush and bramble. Sweaty, shirtless men – fried to a near-crisp – rain danced far back from the Sutro Stage. And those free-jazzing saxophonists that I mentioned in the pre-festival rundown were indeed beside Merrill Garbus. Next up, I high-tailed it to foodlands, where I shared gourmet tator tots from Q and later, a falafel snow cone – not as odd as it sounds – from Straw. I then hit the Twin Peaks stage for !!! I'm glad I ran out of !!! Major Lazer was a whole otherworldly affair. I watched a few John Fogerty songs – all CCR – and thought how proud my father would be if he knew my proximity to Mr.

Outside Lands 2011: Recap. Photograph by Darryl Kirchner In its fourth year, San Francisco’s Outside Lands seems to have made everyone happy, and for the festival’s sake—it’s perfect timing. 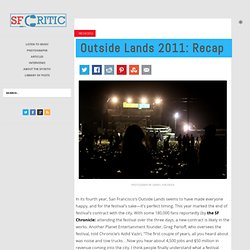 Why Bumbershoot Should Have Eaten at Outside Lands This Weekend - Seattle Restaurants and Dining - Voracious. Outside Lands. Man Arrested For Stealing Outside Lands Wristbands. A Los Angeles man was arrested at this past weekend’s Outside Lands Music and Arts Festival as police claim he stole nearly $4,000 worth of wristbands from the event’s box office. 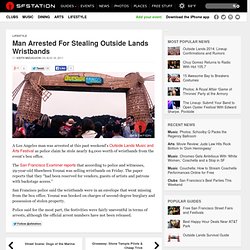 The San Francisco Examiner reports that according to police and witnesses, 29-year-old Shawheen Younai was selling wristbands on Friday. The paper reports that they “had been reserved for vendors, guests of artists and patrons with backstage access.” San Francisco police said the wristbands were in an envelope that went missing from the box office. Younai was booked on charges of second-degree burglary and possession of stolen property. Police said for the most part, the festivities were fairly uneventful in terms of arrests, although the official arrest numbers have not been released. INTERVIEW: The Joy Formidable at Outside Lands 2011 << Music News. The Western Edge’s View of the Outside Lands Festival. The three-day Outside Lands Festival has come and gone. 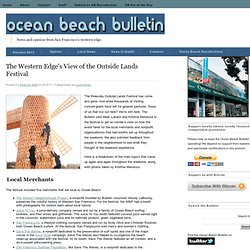 And while thousands of visiting concert-goers have left for greener pastures, those of us that live out here? We’re still here. The Bulletin sent Mark Lukach and Kristine Mendoza to the festival to get an insider’s view on how the event fared for the local merchants and nonprofit organizationss that had booths set up throughout the weekend. We also solicited feedback from people in the neighborhood to see what they thought of the weekend experience.

Here is a breakdown of the main topics that came up again and again throughout the weekend, along with photos taken by Kristine Mendoza. Local Merchants The festival included five merchants that are local to Ocean Beach. The Western Neighborhoods Project, a nonprofit founded by Bulletin columnist Woody LaBounty, preserves the colorful history of Western San Francisco. LIVE REVIEW: Outside Lands 2011, Day 3. Our feet may be blistered and our faces may be sore from screaming and sunburn, but if you made it all the way to Arcade Fire for the last day of Outside Lands, you know that the whole experience was magical. 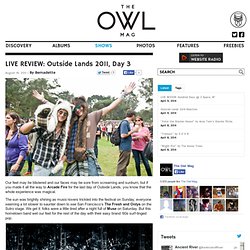 The sun was brightly shining as music-lovers trickled into the festival on Sunday, everyone seeming a lot slower to saunter down to see San Francisco’s The Fresh and Onlys on the Sutro stage. We get it: folks were a little tired after a night full of Muse on Saturday. But this hometown band wet our feet for the rest of the day with their easy brand ’60s surf-tinged pop. We visited the completely solar-powered Panhandle stage to see L.A. up-and-comers Lord Huron, who seem like a natural fit if bands like Vampire Weekend are your thing.

We love the lush sound and charming harmonies of this band and especially watching that madman of a drummer Mark Barry. San Francisco’s 2011 Outside Lands Festival, Day 2. Can you tell that you're in San Francisco yet? 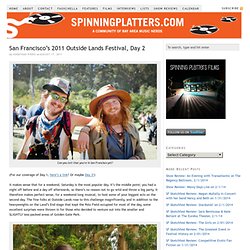 (For our coverage of Day 1, here’s a link! Or maybe Day 3?) It makes sense that for a weekend, Saturday is the most popular day. It’s the middle point; you had a night off before and a day off afterwards, so there’s no reason not to go wild and throw a big party. It therefore makes perfect sense, for a weekend-long musical, to host some of your biggest acts on the second day. Did you miss Ximena? Ximena Sariñana, a singer songwriter from Mexico that is largely unknown in the US, played an early afternoon set at the smallest stage in the venue to one of the smallest crowds all weekend. Paul F. There was an tent parked in the middle of the Polo Fields.

Outside Lands fest about more than music. This is an archived article that was published on sltrib.com in 2011, and information in the article may be outdated. 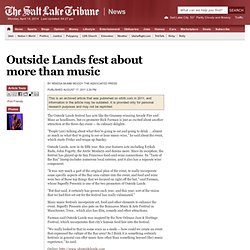 It is provided only for personal research purposes and may not be reprinted. The Outside Lands festival has acts like the Grammy-winning Arcade Fire and Muse as headliners, but co-promoter Rick Farman is just as excited about another attraction at the three-day event — its culinary delights. "People (are) talking about what they're going to eat and going to drink ... almost as much as what they're going to see or hear music-wise," he said about the event, which starts Friday and wraps up Sunday.

Outside Lands 2011: The Ultimate Performance Roundup. Outside Lands 2011: Review. This was my second time at Outside Lands and I have to say, it’s definitely gained some traction! When I last went in 2008, the second year of Outside Lands’ existence, the headliners were Pearl Jam, Dave Matthews Band, and Beastie Boys (who canceled due to Adam Yauch ‘s throat cancer and were replaced with Tenacious D), and while there was a pretty huge turnout, the crowd at this year’s festival was noticeably larger, especially on Saturday with the OK Go, Arctic Monkeys, Black Keys, Muse rockfest. I’ll go ahead and sum up my feelings in a nice, bulleted, Worms -style awards list, accompanied by some lovely media: Sounded Most Like Their Album: TIE – The Shins and MGMT Most Spirit: The Limousines for hanging in there even when their sound guy didn’t. 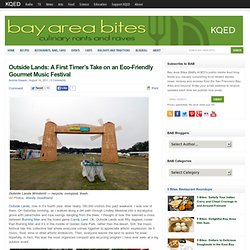 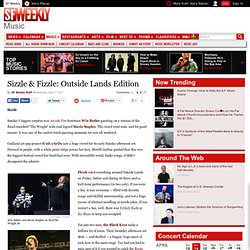 The crowd went nuts, and for good reason: It was one of the coolest torch-passing moments we saw all weekend. Oakland art-pop project tUnE-yArDs saw a huge crowd for its early Sunday afternoon set. Dressed in purple, with a white paint stripe across her face, Merrill Garbus gushed that this was the biggest festival crowd her band had seen. With irresistibly weird, funky songs, it didn't disappoint the adorers.

Christopher Victorio Win Butler and Mavis Staples on â€œThe Weight.â€ MGMT disappointed. Related Stories More About. Big Boi, big deal: Outside Lands 2011 pics. All photos by Erik Anderson Imagery and Caitlin Donohue I'm just going to go ahead and say it because I've had a few days to think about it: that was the best year of Outside Lands yet. Not just because of the weather -- even though my singed epidermis is ample proof that the sun was out and about in Speedway Meadows this weekend -- but because after four years of hype, the sold-out festival is finally justified in its claim that it's among the top five biggest and best in the country.

So who cares if Big Boi didn't show up (at least we got beach ball humor from Dave Chappelle, who seems to be showing his face more around these parts lately) -- a bonus appearance from M.I.A. during Deadmau5 evens it all out in the cosmic sense of things. And who could be mad at Sir Lucious when Bay hip-hop repped as hard as it did with K. Flay and Latryx featuring Jazz Mafia?

Anyway, good job everyone on staying hydrated. Outside Lands 2011 Recap & Photo Gallery. Outside Lands 2011 has come and gone, a late-Summer sleeper success that delivered an impressive variety of rock, indie and electronica flowing all weekend long to a daily capacity crowd of 60,000. Crowds layered up in the NorCal coastal chill to see headliners Phish, Arcade Fire, The Decemberists, Muse, The Black Keys and dozens of other acts on the diverse bill.

Arriving at the festival grounds in San Francisco's Golden Gate Park, it was immediately clear that OSL has taken great strides in greening the entire festival. Concertgoers were greeted with free bike valets, farmers markets, urban agriculture workshops and even a stage entirely powered by solar energy (the Panhandle stage). A proper preparation, given both that San Francisco is so well known as a progressively green-minded city, and the fact that the park itself is full of wooded areas and pathways between stages that resembled nature trails. Check out our reviews of Day 2 & 3 on Page 2! Top Three L.A. Bands at Outside Lands Besides Best Coast and Foster the People. Click to enlarge Andrea Domanick Orgone L.A. acts like Warpaint, Odd Future, Foster the People and Best Coast have really been making the festival circuit rounds this summer, and this past weekend at Outside Lands in San Francisco was no exception.

Eight L.A. artists -- including Best Coast and Foster the People -- were on the bill. But while the intoxicated masses were singing along to well-known songs about pumped up kicks and boyfriends, a handful of up-and-comers showed us there's something new under the sun in L.A. music. Outside Lands 2011 Slideshows: Food + Wine, Music + Art » Bay Area Bites. Outside Lands music review: Nonstop rockin' Muse lead singer Matthew Bellamy performs with the band at Outside Lands Music and Art Festival in Golden Gate Park in San Francisco, Calif., August 13, 2011.

Outside Lands - Saturday Aug. 13, 2011. Festival Review: CoS at Outside Lands 2011. In the 1960s, San Francisco certainly seemed like the place to be. The hippie counterculture movement of that period, specifically in this city, is something that’s popular among historians, musicians, politicians, travelers, ramblers, and all in-between. And that’s not a surprise… it was a pretty radical time. Many people today often talk about wishing they could time travel to the ’60s to spend a day with Jerry Garcia and Janis Joplin. Maybe I’ve just been hanging around too many hippies lately. Outside Lands - August 12-14, 2011 : Music - Food - Wine - Art.