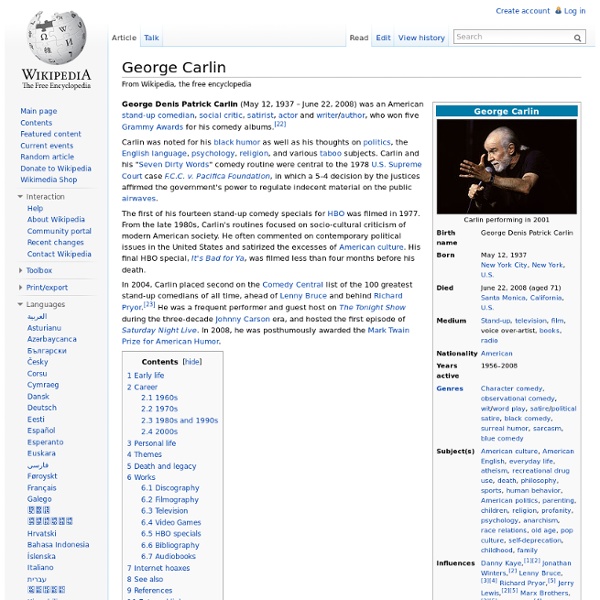 George Denis Patrick Carlin[1] (May 12, 1937 – June 22, 2008) was an American comedian, writer, social critic, and actor who won five Grammy Awards for his comedy albums.[2] Carlin was noted for his black comedy as well as his thoughts on politics, the English language, psychology, religion, and various taboo subjects. Carlin and his "Seven dirty words" comedy routine were central to the 1978 U.S. Supreme Court case F.C.C. v. Pacifica Foundation, in which a 5–4 decision by the justices affirmed the government's power to regulate indecent material on the public airwaves. One newspaper called Carlin "the dean of counterculture comedians. The first of his 14 stand-up comedy specials for HBO was filmed in 1977. Early life[edit] Carlin joined the United States Air Force when he was old enough, and was trained as a radar technician. Career[edit] 1960s[edit] Carlin (right) with singer Buddy Greco in Away We Go (1967). George Carlin in 1969 Carlin was present at Lenny Bruce's arrest for obscenity. Related:  Outside the Box

Biography Penn Jillette Early life[edit] Jillette was born in Greenfield, Massachusetts. His mother, Valda R. Jillette (née Parks; 1909–2000),[2] was a secretary, and his father, Samuel Herbert Jillette (1912–1999),[2] worked at Greenfield's Franklin County Jail.[3][4][5] Penn became an atheist in his early teens after reading the Bible and was subsequently asked to leave the church after asking questions in a youth group that also made skeptics of his peers.[6] Jillette became disenchanted with traditional illusionist acts that presented the craft as authentic magic, such as The Amazing Kreskin on The Tonight Show Starring Johnny Carson. At age eighteen, he saw a show by illusionist James Randi, and became enamored of his approach to magic that openly acknowledged deception as entertainment rather than a mysterious supernatural power. Jillette regularly acknowledges Randi as the one person on the planet he loves the most besides members of his family. Career and Showtime[edit] Business ventures[edit]

Rare fotage Defending Yourself Against "Legal Fiction" We as living people no longer know or understand who we are and everything has been inverted upside down. We have lost our identities and once again have given away our birthright for "bowl of pottage." First Comment: Paul Greetings Henry, In our work to date, we have come across these claims several times: it's important to realize that some of themcan be substantiated with good authority, while othersappear to be theories that have somehow "morphed" into fact primarily for the one(s) asserting such claims. These two short essays are good places to begin,to acquire a necessary foundation: well that the U.S. Our letter to Bill Gates re: USA v.

Garry Davis Sol Gareth "Garry" Davis (27 July 1921 – 24 July 2013) was an international peace activist who created the World Passport, a travel document originally based on the unrecognised concept of world citizenship. Previously Davis worked as a Broadway stage actor and served as an American bomber pilot in World War II.[1] Early life[edit] Davis was born in Bar Harbor, Maine, to Meyer and Hilda (née Emery) Davis.[2] He graduated from the Episcopal Academy in 1940 and attended the Carnegie Institute of Technology (now Carnegie Mellon University). Promoting global instead of national citizenship[edit] Relinquished American citizenship A former Broadway actor who served in the U.S. Actively promoted universal respect for human rights Desperate to prevent what he considered to be the impending World War III, Davis utilized his thespian skills as Danny Kaye's understudy to interrupt a session of the United Nations General Assembly on 22 November 1948, calling for "one government for one world".

/ - World Government of World Citizen - Welcome Antony Garrett Lisi Lisi is known for "An Exceptionally Simple Theory of Everything," a paper proposing a unified field theory based on the E8 Lie group, combining particle physics with Einstein's theory of gravitation. The theory is incomplete and not widely accepted by the physics community. Biography[edit] Early life[edit] After the Ph.D.[edit] After getting his Ph.D., Lisi left academia and moved to Maui — expressing his dissatisfaction with the state of theoretical physics: I got my PhD and looked at my options. On Maui, Lisi volunteered as a staff member at a local Sudbury school, and split his time between working on his own physics research and surfing.[9] Academic reentry[edit] On July 21, 2007, Lisi traveled to the inaugural FQXi conference in Reykjavík, Iceland. On July 8, 2009, at a FQXi conference in the Azores, Lisi made a public bet with Frank Wilczek that superparticles would not be detected by July 8, 2015.[21] Physics research[edit] Work on quantum mechanics[edit] Deferential geometry[edit]

Brian Greene Early life[edit] Greene was born in New York City. His father, Alan Greene, was a one-time vaudeville performer and high school dropout who later worked as a voice coach and composer. He stated in an interview with Lawrence Krauss that he is of Jewish heritage. After attending Stuyvesant High School,[2] Greene entered Harvard in 1980 to concentrate in physics. Career[edit] Greene joined the physics faculty of Cornell University in 1990, and was appointed to a full professorship in 1995. Research[edit] In the field, Greene is best known for his contribution to the understanding of the different shapes the curled-up dimensions of string theory can take. World Science Festival[edit] In 2008, together with Tracy Day (former ABC News producer), Greene co-founded the World Science Festival, whose mission is to cultivate a general public informed by science, inspired by its wonder, convinced of its value, and prepared to engage with its implications for the future. Communicating science[edit]

Neil deGrasse Tyson Neil deGrasse Tyson (/ˈniːəl dəˈɡræs ˈtaɪsən/; born October 5, 1958) is an American astrophysicist, author, and science communicator. He is currently the Frederick P. Rose Director of the Hayden Planetarium at the Rose Center for Earth and Space and a research associate in the department of astrophysics at the American Museum of Natural History. Early life[edit] Tyson was born as the second of three children in the borough of Manhattan in New York City and was raised in the Bronx.[1] His mother, Sunchita Marie (Feliciano) Tyson, was a gerontologist, and his father, Cyril deGrasse Tyson, was a sociologist, human resource commissioner for the New York City mayor John Lindsay, and the first Director of Harlem Youth Opportunities Unlimited.[3][4] Astronomer Carl Sagan, who was a faculty member at Cornell University, tried to recruit Tyson to Cornell for undergraduate studies.[3] In an interview with writer Daniel Simone,[8] Tyson said: Career[edit] In 2001, US President George W. Views[edit]

Brian Cox (physicist) Brian Edward Cox OBE (born 3 March 1968)[1] is an English physicist and former musician, a Royal Society University Research Fellow, PPARC Advanced Fellow at the University of Manchester.[13][14] He is a member of the High Energy Physics group at the University of Manchester, and works on the ATLAS experiment at the Large Hadron Collider (LHC)[15][16] at CERN, near Geneva, Switzerland. He is working on the research and development project of the FP420 experiment in an international collaboration to upgrade the ATLAS and the CMS experiment by installing additional, smaller detectors at a distance of 420 metres from the interaction points of the main experiments.[17][18][19][20] Cox's parents were bankers[1] and he attended the independent Hulme Grammar School[24] in Oldham from 1979 to 1986.[25][26][27] Cox revealed on The Jonathan Ross Show that he performed poorly on his Maths A-level: "I got a D ... He co-presents Space Hoppers and has also featured in Dani's House on CBBC.[39]

Stephen Hawking British theoretical physicist, cosmologist, and author Stephen William Hawking CH CBE FRS FRSA (8 January 1942 – 14 March 2018) was an English theoretical physicist, cosmologist, and author, who was director of research at the Centre for Theoretical Cosmology at the University of Cambridge at the time of his death.[16][17] He was the Lucasian Professor of Mathematics at the University of Cambridge between 1979 and 2009. His scientific works included a collaboration with Roger Penrose on gravitational singularity theorems in the framework of general relativity and the theoretical prediction that black holes emit radiation, often called Hawking radiation. Hawking achieved commercial success with several works of popular science in which he discusses his own theories and cosmology in general. Early life Family In 1950, when Hawking's father became head of the division of parasitology at the National Institute for Medical Research, the family moved to St Albans, Hertfordshire. Graduate years

Related:
Related:  Outside the Box