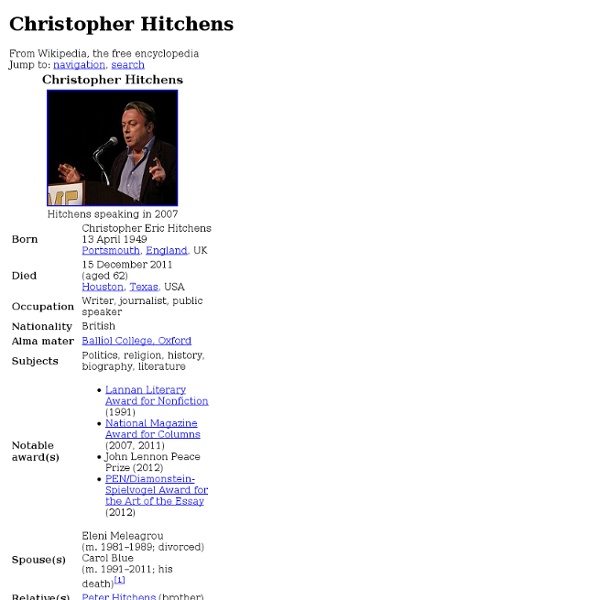 Peter Hitchens Hitchens describes himself as a Burkean conservative,[1] and he is a frequent critic of political correctness. He is the younger brother of the late writer Christopher Hitchens. Early life[edit] He married Eve Ross, the daughter of left-wing journalist David Ross, in 1983. Journalism[edit] After being shortlisted in 2007 and 2009,[15] Hitchens won the Orwell Prize in political journalism in 2010.[16] Peter Kellner, one of the Orwell Prize judges, described Hitchens's writing as being "as firm, polished and potentially lethal as a Guardsman's boot Foreign reporting[edit] Hitchens first became a roving foreign reporter in the early 1990s while working for the Daily Express, when he reported from South Africa during the last days of apartheid, and from Somalia[18] at the time of the US-led military intervention in the country. British broadcast media[edit] Hitchens, 2011 Public image[edit] Beliefs[edit] Morality and religion[edit] The political parties of the United Kingdom[edit] Education[edit]

A Connecticut Yankee in King Arthur's Court Novel by Mark Twain A Connecticut Yankee in King Arthur's Court is an 1889 novel by American humorist and writer Mark Twain. The book was originally titled A Yankee in King Arthur's Court. Some early editions are titled A Yankee at the Court of King Arthur. Twain wrote the book as a burlesque of Romantic notions of chivalry after being inspired by a dream in which he was a knight himself, severely inconvenienced by the weight and cumbersome nature of his armor. It is a satire of feudalism and monarchy that also celebrates homespun ingenuity and democratic values while questioning the ideals of capitalism and outcomes of the Industrial Revolution. Plot[edit] The novel is a comedy set in 6th-century England and its medieval culture through Hank Morgan's view; he is a 19th-century resident of Hartford, Connecticut, who, after a blow to the head, awakens to find himself inexplicably transported back in time to early medieval England where he meets King Arthur himself. "'Bridgeport?'

The Nonbelievers & Godless Heathens of the Atheist Republic What do you want the Atheist Republic mission and goal to be? How can we accomplish that? Send us your views. We might add your answers on this page. Here is what others from the Atheist Republic community have to say: Curtis Robinson Atheist Republic should address the challenges that Atheists face (internal & external attacks, building confidence, and more importantly connecting with others with similar views). Anonymous: ...We should no longer be a generation of people hidden away in cyber-space commenting about what we think and believe.

Edmund Burke Burke was praised by both conservatives and liberals in the 19th century.[5] Since the 20th century, he has generally been viewed as the philosophical founder of modern conservatism.[6][7] Early life[edit] Burke was born in Dublin, Ireland, to a prosperous solicitor father (Richard; died 1761) of the Church of Ireland. It is unclear if this is the same Richard Burke who converted from Catholicism.[8][9] His mother Mary (c. 1702 – 1770), whose maiden name was Nagle, was a Roman Catholic and came from an impoverished but genteel County Cork family. The Burke dynasty descended from an Anglo-Norman surnamed de Burgh (Latinised as de Burgo) who arrived in Ireland in 1185 following the Norman invasion of Ireland by Henry II of England in 1171.[10] Mr. Once an MP, Burke was required to take the oath of allegiance and abjuration, the oath of supremacy, and declare against transubstantiation. Early writing[edit] Member of Parliament[edit] The Gregories estate, purchased by Burke for £20,000 in 1768.

Thomas Paine's "Rights of Man": A Biography Thomas Paine's "Rights of Man": A Biography is Christopher Hitchens's contribution to the Books That Changed the World series. Hitchens, a great admirer of Thomas Paine, covers the history of Paine's 1791 book, The Rights of Man, and analyzes its significance.[1] Reception[edit] References[edit] The War We Never Fought The War We Never Fought: The British Establishment's Surrender to Drugs is the sixth book by British author and Mail on Sunday columnist Peter Hitchens, first published in 2012.[1] Background[edit] Hitchens first announced The War We Never Fought's publication in 2011, and stated that the book would examine "the secret surrender of the British establishment to the cannabis lobby in the late 1960s, and the results of this surrender".[3] Hitchens had claimed attempts to combat drug use by restricting supply and prosecuting drug dealers were futile, unless possession and use were also punished.[10] In April 2012, he gave evidence to the Parliamentary Home Affairs Select Committee as part of its inquiry into drugs policy[11] and called for the British government to introduce a more hardline policy on drugs.[12] The cover image is an obvious take on the album cover for Sgt. Critical reception[edit] See also[edit] Drug liberalization References[edit] External links[edit]

Mark Twain American author and humorist Samuel Langhorne Clemens (November 30, 1835 – April 21, 1910),[1] known by his pen name Mark Twain, was an American writer, humorist, entrepreneur, publisher, and lecturer. He was lauded as the "greatest humorist this country has produced",[2] and William Faulkner called him "the father of American literature".[3] His novels include The Adventures of Tom Sawyer (1876) and its sequel, the Adventures of Huckleberry Finn (1884),[4] the latter often called "The Great American Novel". Twain was raised in Hannibal, Missouri, which later provided the setting for Tom Sawyer and Huckleberry Finn. Twain earned a great deal of money from his writings and lectures, but he invested in ventures that lost most of it—such as the Paige Compositor, a mechanical typesetter that failed because of its complexity and imprecision. Biography Early life Pilot was the grandest position of all. As Twain describes it, the pilot's prestige exceeded that of the captain. Travels Writing Views

On the Origin of Species A work of scientific literature by Charles Darwin which is considered to be the foundation of evolutionary biology Various evolutionary ideas had already been proposed to explain new findings in biology. There was growing support for such ideas among dissident anatomists and the general public, but during the first half of the 19th century the English scientific establishment was closely tied to the Church of England, while science was part of natural theology. Ideas about the transmutation of species were controversial as they conflicted with the beliefs that species were unchanging parts of a designed hierarchy and that humans were unique, unrelated to other animals. The political and theological implications were intensely debated, but transmutation was not accepted by the scientific mainstream. Summary of Darwin's theory[edit] Darwin pictured shortly before publication Background[edit] Developments before Darwin's theory[edit] Inception of Darwin's theory[edit] Further development[edit]

Charles Darwin English naturalist and biologist Charles Robert Darwin FRS FRGS FLS FZS[2] (;[5] 12 February 1809 – 19 April 1882) was an English naturalist, geologist and biologist,[6] best known for his contributions to the science of evolution.[I] His proposition that all species of life have descended over time from common ancestors is now widely accepted, and considered a foundational concept in science.[7] In a joint publication with Alfred Russel Wallace, he introduced his scientific theory that this branching pattern of evolution resulted from a process that he called natural selection, in which the struggle for existence has a similar effect to the artificial selection involved in selective breeding.[8] Darwin has been described as one of the most influential figures in human history,[9] and he was honoured by burial in Westminster Abbey.[10] Biography Early life and education Chalk drawing of the seven-year-old Charles Darwin in 1816, already with a potted plant, by Ellen Sharples Legacy Children