The Box Kite- History, How they Work, How to Make One and Spectacular Designs. Box kites haven't been around for as long as many people think, The Chinese were using single sail kites 2.800 years ago. 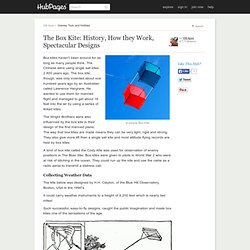 The box kite though, was only invented about one hundred years ago by an Australian called Lawrence Hargrave. He wanted to use them for manned flight.and managed to get about 16 feet into the air by using a series of linked kites. The Wright Brothers were also influenced by the box kite in their design of the first manned plane, The way that box kites are made means they can be very light, rigid and strong.

They also give more lift than a single sail kite and most altitude flying records are held by box kites A kind of box kite called the Cody Kite was used for observation of enemy positions in The Boer War. Collecting Weather Data The kite below was designed by H.H. It could carry weather instruments to a height of 9,200 feet which is nearly two miles! How to Make a Box Kite - Outdoor Projects. Waldof Box Kite Plans. Invented in 1977 by Peter Waldron of Worcestorshire, England, the Waldof Box kite is a spectacular sight in the sky and and the envy of onlookers. 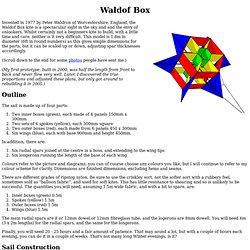 Whilst certainly not a beginners kite to build, with a little time and care, neither is it very difficult. This model is 1.8m in diameter (6ft in round numbers) as this gives simple dimensions for the parts, but it can be scaled up or down, adjusting spar thicknesses accordingly. (Scroll down to the end for some photos people have sent me.) (My first prototype, built in 2000, was half the length from front to back and never flew very well. Later, I discovered the true proportions and adjusted these plans, but only got around to rebuilding it in 2005.) Outline The sail is made up of four parts: Two inner boxes (green), each made of 6 panels 150mm x 300mm Two sets of 6 spokes (yellow), each 300mm square Two outer boxes (red), each made from 6 panels 450 x 300mm Six wings (blue), each with base 900mm and height 450mm.

In addition, there are: Square Box Kite with Wings. There is no easier way to make this strong-flying kite than first to make a box kite as described in No. 17, and to add the wings as shown in Figure 53. 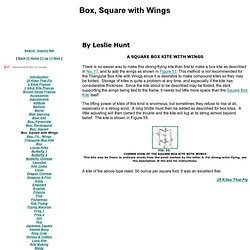 This method is not recommended for the Triangular Box Kite with Wings since it is desirable to make compound kites so they may be folded. Storage of kites is quite a problem at any time, and especially if the kite has considerable thickness. Since the kite about to be described may be folded, the stick supporting the wings being tied to the frame, it needs but little more space than the Square Box Kite itself. The lifting power of kites of this kind is enormous, but sometimes they refuse to rise at all, especially in a strong wind.

A long bridle must then be added as described for box kites. The Box Kite. How to Make a Box Kite. Here is one of the box kites I have made and it is the subject of this tutorial on making one. 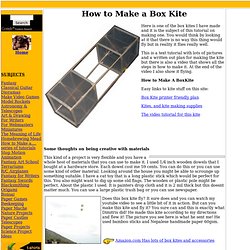 You would think by looking at it that there is no way this thing would fly but in reality it flies really well. This is a text tutorial with lots of pictures and a written out plan for making the kite but there is also a video that shows all the steps in how to make it. At the end of the video I also show it flying. How to Make A BoxKite Easy links to kite stuff on this site: Box Kite printer friendly plan Kites, and kite making supplies The video tutorial for this kite Some thoughts on being creative with materials This kind of a project is very flexible and you have a whole host of materials that you can use to make it. Does this box kite fly? Amazon.com Has lots of box kites and accessories And here are two pictures of the boxkite that Rooplal made following these instructions. Stake Line Winder, 30# x 500 ft. If you need kite string you might be able to do what I did.

XXIII. Kites. Part 2. Diamond Box Kites. This section is from the book "Things To Make", by Archibald Williams. 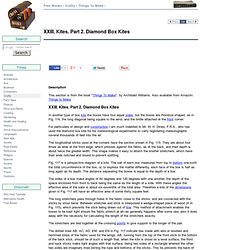 Also available from Amazon: Things to Make. In another type of box kite the boxes have four equal sides, but the boxes are rhombus-shaped, as in Fig. 116, the long diagonal being square to the wind, and the bridle attached at the front corner. For particulars of design and construction I am much indebted to Mr. W.