Why Darwinian Economics Is so Threatening to Libertarians. The Case For A 21-Hour Work Week. By Michael J. 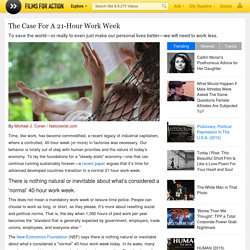 Coren / fastcoexist.com Time, like work, has become commodified, a recent legacy of industrial capitalism, where a controlled, 40-hour week (or more) in factories was necessary. Our behavior is totally out of step with human priorities and the nature of today’s economy. To lay the foundations for a "steady-state" economy—one that can continue running sustainably forever—a recent paper argues that it’s time for advanced developed countries transition to a normal 21-hour work week. This does not mean a mandatory work week or leisure-time police. The New Economics Foundation (NEF) says there is nothing natural or inevitable about what’s considered a "normal" 40-hour work week today.

The NEF argues to achieve more satisfying lives we need to challenge social norms and reset the industrial clock in our heads. Besides, it may be the only way a modern global society won’t overwhelm the earth’s resources. Why Darwinian Economics Is so Threatening to Libertarians. Before Copernicus, mankind knew that the earth sat motionless at the very center of the universe with the sun and stars turning around it. 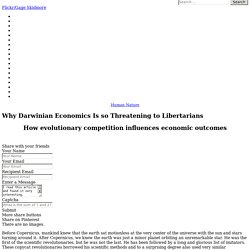 After Copernicus, we knew the earth was just a minor planet orbiting an unremarkable star. He was the first of the scientific revolutionaries, but he was not the last. WEEKLY WEB VIDEOS. Complete Edward R. Murrow Speech From Good Night, and Good Luck. Such a powerful speech by one of my all-time heroes. 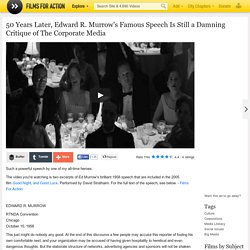 The video you're watching is two excerpts of Ed Murrow's brilliant 1958 speech that are included in the 2005 film Good Night, and Good Luck. Performed by David Strathairn. For the full text of the speech, see below. - Films For Action RTNDA Convention Chicago October 15, 1958. Christopher Hitchens - Mother Teresa: Hell's Angel.

RSA Animate - Re-Imagining Work. Reinventing Organizations - Home. AARP The Journal. Buurtzorg (“neighborhood care”) is an innovative approach in the Netherlands which was set up to deliver home care. 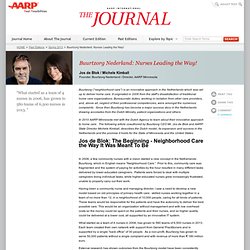 It originated in 2006 from the staff’s dissatisfaction of traditional home care organizations. Bureaucratic duties, working in isolation from other care providers, and, above all, neglect of their professional competencies, were amongst the numerous complaints. Since then Buurtzorg has become a major success story in the Netherlands drawing accolades from the Dutch Ministry, patient organizations and others. In 2010 AARP Minnesota met with the Dutch Agency to learn about their innovative approach to home care.

The following article coauthored by Buurtzorg CEO Mr. Jos de Blok: The Beginning - Neighborhood Care the Way It Was Meant To Be In 2006, a few community nurses with a vision started a new concept in the Netherlands: Buurtzorg, which in English means “Neighborhood Care.” What started as a team of 4 nurses in 2006, has grown to 580 teams of 6,500 nurses in 2013. Launchpad. HTML Editor. Neighbourly Community Groups, Leaders and Organisations. Temporal Storytelling: Journeys through the 5th Dimension by Spatial Fusion on Prezi. Home. HOME. Www.waimakariri.govt.nz/Libraries/MR873/KAIAPOI_MAORI_RESERVE_KAINGA-NOHOANGA_PRE_CONSULTATION_CONCEPT_AND_SCOPING_REPORT_MR873_OCTOBER_2011.sflb.ashx.

Agile Open Government - Regulatory Planning by Nick Williamson on Prezi. The Starfish Project. Apply Now » Next Foundation. Thank you for your interest in the NEXT Foundation. 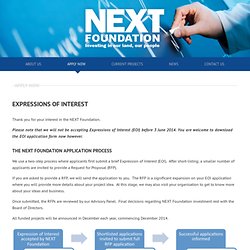 Please note that we will not be accepting Expressions of Interest (EOI) before 3 June 2014. You are welcome to download the EOI application form now however. The NEXT Foundation application process We use a two-step process where applicants first submit a brief Expression of Interest (EOI). After short-listing; a smaller number of applicants are invited to provide a Request for Proposal (RFP). If you are asked to provide a RFP, we will send the application to you. Once submitted, the RFPs are reviewed by our Advisory Panel. All funded projects will be announced in December each year, commencing December 2014. This stepped process is designed to be as simple as possible, and to reduce the substantial burden of a full application process.

See our Frequently Asked Questions for further information. Before submitting your EOI… What we fund Size of Grants Multi-year applications Eligibility Criteria Who can apply Eligible Expenditure Ready to apply? Centre for Liveable Cities. Www.clc.gov.sg/documents/uss/USS_Land_Acquisition_and_Resettlement.pdf. The Conference Board. Join Joseph McCann on June 7, 2013 at 2 p.m. for a book discussion webcast, featuring his new book, Mastering Turbulence: The Essential Capabilities of Agile & Resilient Individuals, Team and Organizations (2012). 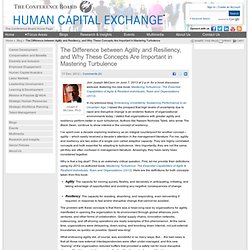 In my previous blog, Embracing Uncertainty: Sustaining Performance in an Uncertain Age, I raised the prospect that high levels of uncertainty due to rapid and disruptive change is an endemic feature of organizational environments today. I stated that organizations with greater agility and resiliency perform better in such turbulence. Authors like Nassim Nicholas Taleb, who wrote The Black Swan, continue to show interest in the concept of resiliency. Fom_infographic_1280x1811.png (1280×1811)