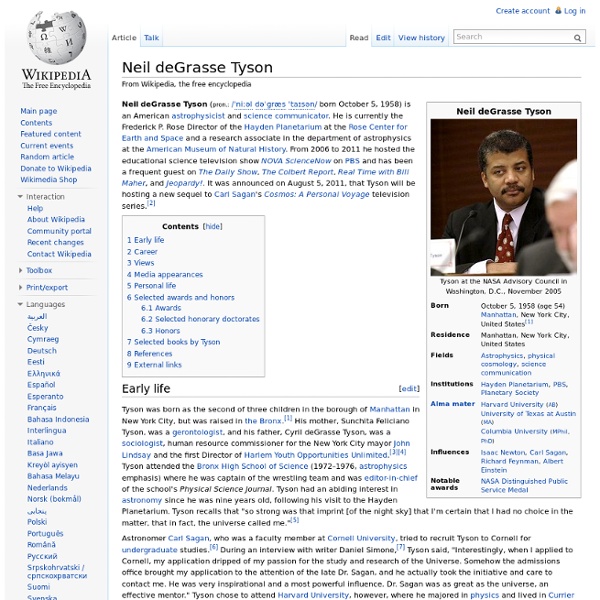 Neil deGrasse Tyson (/ˈniːəl dəˈɡræs ˈtaɪsən/; born October 5, 1958) is an American astrophysicist, author, and science communicator. He is currently the Frederick P. Rose Director of the Hayden Planetarium at the Rose Center for Earth and Space and a research associate in the department of astrophysics at the American Museum of Natural History. From 2006 to 2011, he hosted the educational science television show NOVA ScienceNow on PBS and has been a frequent guest on The Daily Show, The Colbert Report, Real Time with Bill Maher, and Jeopardy!. Early life[edit] Tyson was born as the second of three children in the borough of Manhattan in New York City and was raised in the Bronx.[1] His mother, Sunchita Marie (Feliciano) Tyson, was a gerontologist, and his father, Cyril deGrasse Tyson, was a sociologist, human resource commissioner for the New York City mayor John Lindsay, and the first Director of Harlem Youth Opportunities Unlimited.[3][4] Career[edit] In 2001, US President George W. Related:  Outside the Box

Brian Greene Early life[edit] Greene was born in New York City. His father, Alan Greene, was a one-time vaudeville performer and high school dropout who later worked as a voice coach and composer. He stated in an interview with Lawrence Krauss that he is of Jewish heritage. After attending Stuyvesant High School,[2] Greene entered Harvard in 1980 to concentrate in physics. After completing his bachelor's degree, Greene earned his doctorate from Oxford University as a Rhodes Scholar, graduating in 1987. Career[edit] Greene joined the physics faculty of Cornell University in 1990, and was appointed to a full professorship in 1995. Research[edit] In the field, Greene is best known for his contribution to the understanding of the different shapes the curled-up dimensions of string theory can take. World Science Festival[edit] The World Science Festival’s signature event is a five day festival in New York City, typically falling at the May. Communicating science[edit] Brian Greene on Bookbits radio.

Brian Cox (physicist) Brian Edward Cox OBE (born 3 March 1968)[1] is an English physicist and former musician, a Royal Society University Research Fellow, PPARC Advanced Fellow at the University of Manchester.[13][14] He is a member of the High Energy Physics group at the University of Manchester, and works on the ATLAS experiment at the Large Hadron Collider (LHC)[15][16] at CERN, near Geneva, Switzerland. He is working on the research and development project of the FP420 experiment in an international collaboration to upgrade the ATLAS and the CMS experiment by installing additional, smaller detectors at a distance of 420 metres from the interaction points of the main experiments.[17][18][19][20] Cox's parents were bankers[1] and he attended the independent Hulme Grammar School[24] in Oldham from 1979 to 1986.[25][26][27] Cox revealed on The Jonathan Ross Show that he performed poorly on his Maths A-level: "I got a D ... I was really not very good ... Session discography[62] Prof Brian Cox, Former Rock Star

Antony Garrett Lisi Lisi is known for "An Exceptionally Simple Theory of Everything," a paper proposing a unified field theory based on the E8 Lie group, combining particle physics with Einstein's theory of gravitation. The theory is incomplete and not widely accepted by the physics community. Biography[edit] Early life[edit] After the Ph.D. After getting his Ph.D., Lisi left academia and moved to Maui — expressing his dissatisfaction with the state of theoretical physics: I got my PhD and looked at my options. On Maui, Lisi volunteered as a staff member at a local Sudbury school, and split his time between working on his own physics research and surfing.[9] Academic reentry[edit] On July 21, 2007, Lisi traveled to the inaugural FQXi conference in Reykjavík, Iceland. On July 8, 2009, at a FQXi conference in the Azores, Lisi made a public bet with Frank Wilczek that superparticles would not be detected by July 8, 2015.[21] Physics research[edit] Work on quantum mechanics[edit] Deferential geometry[edit]

Stephen Hawking British theoretical physicist, cosmologist, and author Stephen William Hawking CH CBE FRS FRSA (8 January 1942 – 14 March 2018) was an English theoretical physicist, cosmologist, and author, who was director of research at the Centre for Theoretical Cosmology at the University of Cambridge at the time of his death.[16][17] He was the Lucasian Professor of Mathematics at the University of Cambridge between 1979 and 2009. His scientific works included a collaboration with Roger Penrose on gravitational singularity theorems in the framework of general relativity and the theoretical prediction that black holes emit radiation, often called Hawking radiation. Hawking was the first to set out a theory of cosmology explained by a union of the general theory of relativity and quantum mechanics. Hawking achieved commercial success with several works of popular science in which he discusses his own theories and cosmology in general. Early life Family Primary and secondary school years Graduate years

Physics of the Future Contents[edit] Each chapter is sorted into three sections: Near future (2000-2030), Midcentury (2030-2070), and Far future (2070-2100). Kaku notes that the time periods are only rough approximations, but show the general time frame for the various trends in the book.[1] Future of the Computer: Mind over Matter[edit] Kaku begins with Moore's law, and compares a chip that sings "Happy Birthday" with the Allied forces in 1945, stating that the chip contains much more power,[1][6] and that "Hitler, Churchill, or Roosevelt might have killed to get that chip." He also predicts that glasses and contact lenses will be connected to the internet, using similar technology to virtual retinal displays. Future of AI: Rise of the Machines[edit] Kaku discusses robotic body parts, modular robots, unemployment caused by robots, surrogates and avatars (like their respective movies), and reverse engineering the brain. Future of Medicine: Perfection and Beyond[edit] Nanotechnology: Everything from Nothing?

A Brief History of Time Overview[edit] A Brief History of Time attempts to explain a range of subjects in cosmology, including the big bang, black holes and light cones, to the nonspecialist reader. Its main goal is to give an overview of the subject, but unusual for a popular science book, it also attempts to explain some complex mathematics. The 1996 edition of the book and subsequent editions discuss the possibility of time travel and wormholes and explore the possibility of having a universe without a quantum singularity at the beginning of time. Early in 1983, Hawking first approached Simon Mitton, the editor in charge of astronomy books at Cambridge University Press, with his ideas for a popular book on cosmology. Editions[edit] Film[edit] In 1991, Errol Morris directed a documentary film about Hawking, but although they share a title, the film is a biographical study of Hawking, and not a filmed version of the book. Opera[edit] See also[edit] References[edit] External links[edit]

The God Delusion The God Delusion is a 2006 best-selling,[1] non-fiction book by English biologist Richard Dawkins, professorial fellow of New College, Oxford,[2][3] and former holder of the Charles Simonyi Chair for the Public Understanding of Science at the University of Oxford. In The God Delusion, Dawkins contends that a supernatural creator almost certainly does not exist and that belief in a personal god qualifies as a delusion, which he defines as a persistent false belief held in the face of strong contradictory evidence. He is sympathetic to Robert Pirsig's statement in Lila that "when one person suffers from a delusion it is called insanity. When many people suffer from a delusion it is called religion".[4] The book has attracted widespread commentary, with many books written in response. Background[edit] Dawkins has argued against creationist explanations of life in his previous works on evolution. Synopsis[edit] Dawkins writes that The God Delusion contains four "consciousness-raising" messages:

The Hidden Reality: Parallel Universes and the Deep Laws of the Cosmos Brian Greene talks about The Hidden Reality on Bookbits radio. The Hidden Reality is a book by Brian Greene published in 2011 which explores the concept of the multiverse and the possibility of parallel universes. It has been nominated for the Royal Society Winton Prize for Science Books for 2012. Content[edit] In his book, Greene discussed nine types of parallel universes: The quilted multiverse only works in an infinite universe. Reception[edit] Timothy Ferris reports in the review in The New York Times Book Review that “If extraterrestrials landed tomorrow and demanded to know what the human mind is capable of accomplishing, we could do worse than to hand them a copy of this book.” [1] Anthony Doerr, in his On Science column of the Boston Globe, wrote that "Greene might be the best intermediary I’ve found between the sparkling, absolute zero world of mathematics and the warm, clumsy world of human language." Janet Maslin, The New York Times claims “Mr. Popular culture[edit] See also[edit]

The Elegant Universe The Elegant Universe: Superstrings, Hidden Dimensions, and the Quest for the Ultimate Theory is a book by Brian Greene published in 1999, which introduces string and superstring theory, and provides a comprehensive though non-technical assessment of the theory and some of its shortcomings. In 2000, it won the Royal Society Prize for General and was a finalist for the Pulitzer Prize Nonfiction. A new edition was released in 2003, with an updated preface. Table of contents[edit] Preface (with an additional preface to the 2003 edition)Part I: The Edge of KnowledgePart II: The Dilemma of Space, Time, and the QuantaPart III: The Cosmic SymphonyPart IV: String Theory and the Fabric of SpacetimePart V: Unification in the Twenty-First Century Contents[edit] Adaptations[edit] Einstein's DreamStrings The ThingWelcome To The 11th Dimension The Elegant Universe was also interpreted by choreographer Karole Armitage, of Armitage Gone! Errors[edit] See also[edit] [edit] References[edit] External links[edit]

Related:
Related:  Outside the Box