Social media drives innovation among Somali youth. Rebuilding: Somalia. Somalia’s young entrepreneurs are using technology and innovation to find their way into the new global economy — Quartz. After living and studying in several Asian countries for 7 years, Mohamed Abdilahi Dahir came back to Somalia without a plan on what to do next. 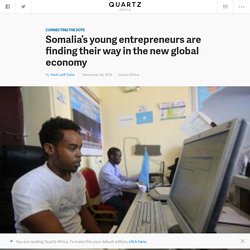 When he started asking around for information about start-ups and investment, he couldn’t find anyone to guide him. To better understand the market, he enrolled in a business administration program at a local university in Hargeisa, the capital of Somaliland region. Early this year, Dahir (no relation of the writer) started Better Business Solutions, a consultancy that helps coach entrepreneurs. The company assisted young enterprises to develop business plans, conduct market research, and approach financiers. Dahir and his team also heeded their own advice and started pitching some of their ideas to investors.

In early October, their electronic payment project dubbed ePocket, was selected from a pool of 160 applications to be part of the 12 inaugural projects nominated for the 2016 Innovate Accelerator program. Starup grind Mogadishu Hosts Leila Xiis from Jeeb uroon. Somalia: Women From Somali Diaspora Return Home to Start Enterprises. Tuesday, April 23, 2013Amina Ali, 32, is among a growing number of Somali women who are returning to Mogadishu to start their own businesses after years of living abroad. 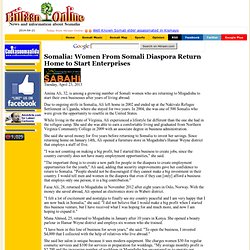 Due to ongoing strife in Somalia, Ali left home in 2002 and ended up at the Nakivale Refugee Settlement in Uganda, where she stayed for two years. In 2004, she was one of 500 Somalis who were given the opportunity to resettle in the United States. While living in the state of Virginia, Ali experienced a lifestyle far different than the one she had in the refugee camp. She said she was able to earn a comfortable living and graduated from Northern Virginia Community College in 2009 with an associate degree in business administration. She said she saved money for five years before returning to Somalia to invest her savings.

"I was not counting on making a big profit, but I started this business to create jobs, since the country currently does not have many employment opportunities," she said. Grant for Somalia in response to call for diaspora investment. Remittances to be channelled to agricultural development Rome, 4 February 2013 – Following the recent call by Hassan Sheikh Mohamud, President of the Federal Government of Somalia, to its diaspora abroad to invest in the reconstruction of the country, the International Fund for Agricultural Development (IFAD) announced a new programme that will leverage more than US$1 billion sent home by Somalis annually. 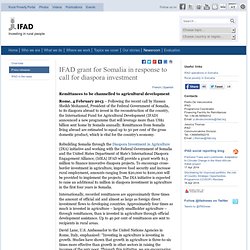 Remittances from Somalis living abroad are estimated to equal up to 50 per cent of the gross domestic product, which is vital for the country’s economy. Rebuilding Somalia through the Diaspora Investment in Agriculture (DIA) initiative and working with the Federal Government of Somalia and the United States Department of State’s International Diaspora Engagement Alliance, (IdEA) IFAD will provide a grant worth $1.5 million to finance innovative diaspora projects. David Lane, U.S. Notes to Editors: The U.S. Somalia: Investment Opportunities for the Diaspora. By Yusuf AbudiFriday, April 26, 2013 Would you go back to Somalia if you’re given a grant worth of 100,000 U.S dollar to invest in the country to generate new resources? 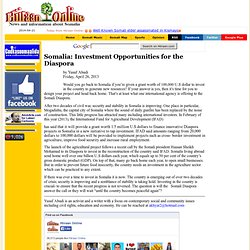 If your answer is yes, then it’s time for you to design your project and head back home. That’s at least what one international agency is offering to the Somali Diaspora. After two decades of civil war, security and stability in Somalia is improving. One place in particular, Mogadishu, the capital city of Somalia where the sound of daily gunfire has been replaced by the noise of construction. Has said that it will provide a grant worth 1.5 million U.S dollars to finance innovative Diaspora projects in Somalia in a new initiative to tap investment. Somalia is Open for Business. Rebuilding Somalia’s Economy by Somali Diaspora. London based Somalia Economic Think Tank -Somali Economic Forum hosted UK based Somali professionals and businesses to a networking forum at the Hilton Hyde Park . 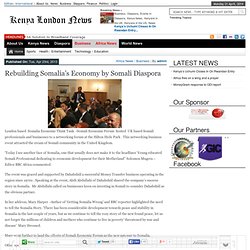 This networking business event attracted the cream of Somali community in the United Kingdom. ‘Today I see another face of Somalia, one that usually does not make it to the headlines’ Young educated Somali Professional dedicating to economic development for their Motherland” Solomon Mugera – Editor BBC Africa commented. The event was graced and supported by Dahabshiil a successful Money Transfer business operating in the region since 1970s .

Speaking at the event, Abdi Abdullahi of Dahabshiil shared the company’s success story in Somalia. Mr Abdullahi called on businesses keen on investing in Somali to consider Dahabshiil as the obvious partner. Economy: Somalian Diaspora Returns. Somalia is Open for Business. Somali capital braces for business boom with improved security. By Chrispinus Omar MOGADISHU, April 26 (Xinhua) -- There are signs businesses are getting a new lease of life in the Somali capital Mogadishu. 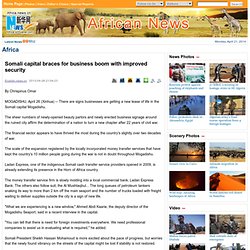 The sheer numbers of newly-opened beauty parlors and newly erected business signage around the ruined city affirm the determination of a nation to turn a new chapter after 22 years of civil war. The financial sector appears to have thrived the most during the country's slightly over two decades of war. The scale of the expansion registered by the locally incorporated money transfer services that have kept the country's 10 million people going during the war is not in doubt throughout Mogadishu.