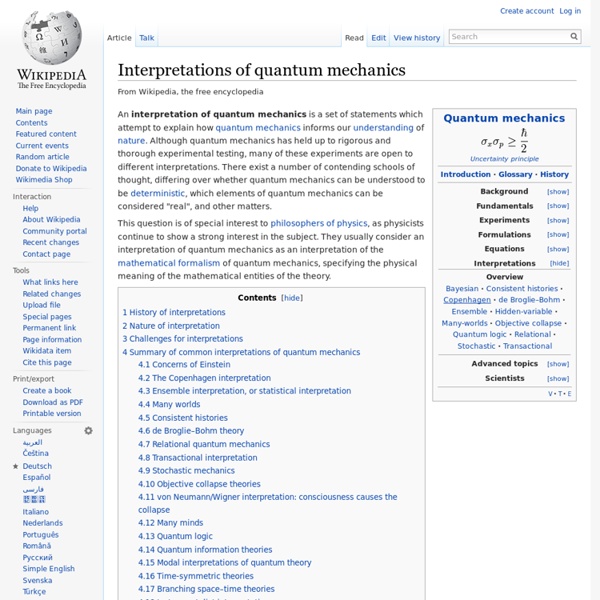 Quantum Physics Revealed As Non-Mysterious This is one of several shortened indices into the Quantum Physics Sequence. Hello! You may have been directed to this page because you said something along the lines of "Quantum physics shows that reality doesn't exist apart from our observation of it," or "Science has disproved the idea of an objective reality," or even just "Quantum physics is one of the great mysteries of modern science; no one understands how it works." There was a time, roughly the first half-century after quantum physics was invented, when this was more or less true. The series of posts indexed below will show you - not just tell you - what's really going on down there. Some optional preliminaries you might want to read: Reductionism: We build models of the universe that have many different levels of description. And here's the main sequence: Quantum Explanations: Quantum mechanics doesn't deserve its fearsome reputation.

EPR paradox Albert Einstein The EPR paradox is an early and influential critique leveled against the Copenhagen interpretation of quantum mechanics. Albert Einstein and his colleagues Boris Podolsky and Nathan Rosen (known collectively as EPR) designed a thought experiment which revealed that the accepted formulation of quantum mechanics had a consequence which had not previously been noticed, but which looked unreasonable at the time. The scenario described involved the phenomenon that is now known as quantum entanglement. According to quantum mechanics, under some conditions, a pair of quantum systems may be described by a single wave function, which encodes the probabilities of the outcomes of experiments that may be performed on the two systems, whether jointly or individually. At the time the EPR article discussed below was written, it was known from experiments that the outcome of an experiment sometimes cannot be uniquely predicted. History of EPR developments[edit] Einstein's opposition[edit]

10 Enormous Numbers Technology One of the first questions that kids often ask is “What is the biggest number?” This question is an important step in transitioning to a world of abstract concepts. The answer is of course that numbers are generally considered endless, but there gets to be a point were numbers become so big that there really is no point in having them, they have no real importance outside of the fact that yes technically they do exist. Ten to the eightieth power – a 1 with 80 zeros after it – is quite massive but somewhat tangible at least from a relatively concrete point of view. The word googol, with a slightly different spelling, has become a frequently used verb in modern times, thanks to a highly popular search engine. A Plank length is extremely small, approximately 1.616199 x 10-35 meters, or in long form 0.00000000000000000000000000000616199 meters. The third largest number on this list, the number of all the plank volumes in the universe, consists of 185 digits. Sorry, had to do it.

Applications Relationship between string theory and quantum field theory Many first principles in quantum field theory are explained, or get further insight, in string theory: Note: formally, gauge symmetries in string theory are (at least in most cases) a result of the existence of a global symmetry together with the profound gauge symmetry of string theory, which is the symmetry of the worldsheet under a local change of coordinates and scales. How to Find and Care for a Pet Tardigrade ( Water Bear ) 'Water bears' is a colloquial name for tiny multicellular critters (typically 0.05-1.5mm long, depending on the species) that have always delighted microscopists. They are properly called tardigrades, and with four pairs of stumpy legs with a slow lumbering gait they do look like a microscopic bear (an eight legged, microscopic bear, that is). Tardigrades ( Water Bears ) live in moss and ferns. They are some of the most amazing animals on Earth. They can survive: Temperatures as low as -200 °C (-328 °F) and as high as 151 °C (304 °F);Freezing in a block of ice,Lack of oxygen,Lack of water for as long as decade(s).Levels of X-ray radiation 1000x the lethal human dose,Most noxious chemicals,Boiling alcohol,Low pressure of a vacuum; like that of space,And high pressure (up to 6x the pressure of the deepest part of the ocean). They may be microscopic, but are very cool! Ad Steps Give us 3 minutes of knowledge! Can you tell us about Painting doors? Removing paint? Mosquito control? Tips Warnings

Grand Unified Theory A Grand Unified Theory (GUT) is a model in particle physics in which at high energy, the three gauge interactions of the Standard Model which define the electromagnetic, weak, and strong interactions, are merged into one single interaction characterized by one larger gauge symmetry and thus one unified coupling constant. During the grand unification epoch, the gauge force separated from the gravitational force. Models that do not unify all interactions using one simple Lie group as the gauge symmetry, but do so using semisimple groups, can exhibit similar properties and are sometimes referred to as Grand Unified Theories as well. Unifying gravity with the other three interactions would provide a theory of everything (TOE), rather than a GUT. Because their masses are predicted to be just a few orders of magnitude below the Planck scale, at the GUT scale, well beyond the reach of foreseen particle colliders experiments, novel particles predicted by GUT models cannot be observed directly.

The tardigrade genome has been sequenced, and it has the most foreign DNA of any animal Scientists have sequenced the entire genome of the tardigrade, AKA the water bear, for the first time. And their results suggest that this weird little creature has the most foreign genes of any animal studied so far – or to put it another way, roughly one-sixth of the tardigrade's genome was stolen from other species. We have to admit, we're kinda not surprised. A little background here for those who aren’t familiar with the strangeness that is the tardigrade – the microscopic water creature grows to just over 1 mm on average, and is the only animal that can survive in the harsh environment of space. It can also withstand temperatures from just above absolute zero to well above the boiling point of water, can cope with ridiculous amounts of pressure and radiation, and can live for more than 10 years without food or water. Basically, it's nearly impossible to kill, and now scientists have shown that its DNA is just as bizarre as it is.

Attempt at a unified field theory