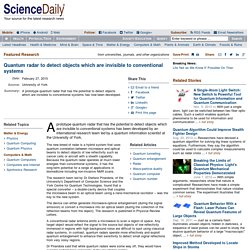 The new breed of radar is a hybrid system that uses quantum correlation between microwave and optical beams to detect objects of low reflectivity such as cancer cells or aircraft with a stealth capability. Because the quantum radar operates at much lower energies than conventional systems, it has the long-term potential for a range of applications in biomedicine including non-invasive NMR scans. Quantum theory. From Wikipedia, the free encyclopedia Quantum theory may mean: In science: In popular culture: 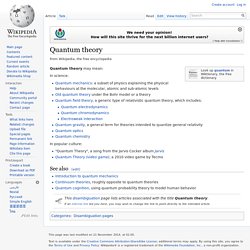 Bizarre quantum experiment suggests time can run backwards  Scientists probed the quantum mechanical properties of single particlesThe particles don't have a fixed state until they are observed by scientistStudy found knowing future outcome of particle also changes initial state They believe particles change their state due to scientist's knowledgeThis suggests that time could runs both backwards and forwardsIf this proves true, it could mean that what we're doing now has been influenced by decisions made by a future version of us, the study claims By Ellie Zolfagharifard For Dailymail.com Published: 21:15 GMT, 9 February 2015 | Updated: 14:52 GMT, 10 February 2015 Your past influences your present which changes your future. 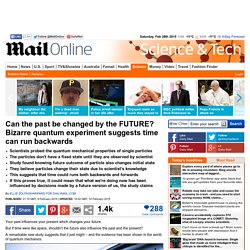 Human Soul Found? Quantum Theory Of Consciousness ‘Orch OR’ Claims Both Science And Religion Are True. Has the human soul been found by science? 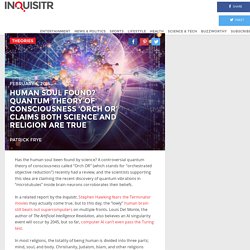 A controversial quantum theory of consciousness called “Orch OR” (which stands for “orchestrated objective reduction”) recently had a review, and the scientists supporting this idea are claiming the recent discovery of quantum vibrations in “microtubules” inside brain neurons corroborates their beliefs. In a related report by the Inquisitr, Stephen Hawking fears the Terminator movies may actually come true, but to this day, the “lowly” human brain still beats out supercomputers on multiple fronts. Louis Del Monte, the author of The Artificial Intelligence Revolution, also believes an AI singularity event will occur by 2045, but so far, computer AI can’t even pass the Turing test.

In most religions, the totality of being human is divided into three parts; mind, soul, and body. Christianity, Judaism, Islam, and other religions typically equate the mind to the physical human brain, which works in conjunction with an immaterial human soul. Scientists make quantum leap, teleport data from light to matter. In another breakthrough in the weird, wonky world of quantum physics, researchers teleport data an unprecedented distance with a novel technique -- inching us closer to the rise of a 'quantum Internet.' We're one step closer to creating the Ansible communicator in "Ender's Game," the warp drive envisioned by Mexican physicist Miguel Alcubierre and a "Star Trek"-style Transporter. 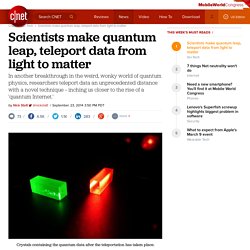 Or we can at least keep thinking that while scientists do the hard, incremental physics required to keep us dreaming of those kinds of future advancements. This time the progress comes from a research team out of the lab of Professor Nicolas Gisin in the physics department at the University of Geneva. The team achieved teleportation of the quantum state of a photon -- in this case, it's known as the photon's polarization -- to a crystal-encased photon more than 25 kilometers (15.5 miles) away. Does the Multiverse Really Exist? THIS IS A PREVIEW. 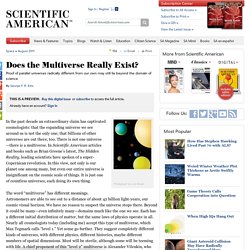 Or subscribe to access the full article. Already have an account? Sign In In the past decade an extraordinary claim has captivated cosmologists: that the expanding universe we see around us is not the only one; that billions of other universes are out there, too. There is not one universe—there is a multiverse. The word “multiverse” has different meanings. What exactly is the Higgs boson?" Particle physics usually has a hard time competing with politics and celebrity gossip for headlines, but the Higgs boson has garnered some serious attention. 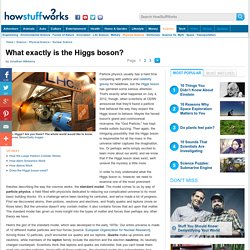 That's exactly what happened on July 4, 2012, though, when scientists at CERN announced that they'd found a particle that behaved the way they expect the Higgs boson to behave. Maybe the famed boson's grand and controversial nickname, the "God Particle," has kept media outlets buzzing. Then again, the intriguing possibility that the Higgs boson is responsible for all the mass in the universe rather captures the imagination, too. Or perhaps we're simply excited to learn more about our world, and we know that if the Higgs boson does exist, we'll unravel the mystery a little more.

In order to truly understand what the Higgs boson is, however, we need to examine one of the most prominent theories describing the way the cosmos works: the standard model. What is String Theory ? We live in a wonderfully complex universe, and we are curious about it by nature. 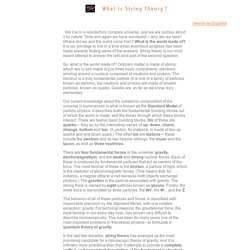 Time and again we have wondered--- why are we here?