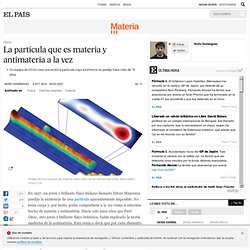 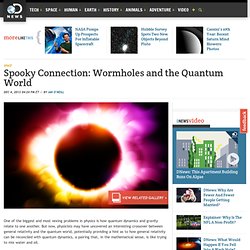 But now, physicists may have uncovered an interesting crossover between general relativity and the quantum world, potentially providing a hint as to how general relativity can be reconciled with quantum dynamics, a pairing that, in the mathematical sense, is like trying to mix water and oil. Wormholes are hypothetical “gateways” between two points in space and time. A consequence of the equations arising from Albert Einstein’s bedrock theory of General Relativity, wormholes have spawned countless science fiction dreams of time travel and zooming between two distant locations faster than the speed of light.

ANALYSIS: Brian Cox: Time Travel is Easy! Kinda In the quantum world, an apparently disparate place when compared with general relativity (which governs gravitational interactions and, by extension, wormholes), “entanglement” between subatomic particles is possible. Scientists Say They've Created A Freaky New Form Of Light. It's easy to shine light through a crystal, but researchers at Princeton University are turning light into crystals--essentially creating "solid light. 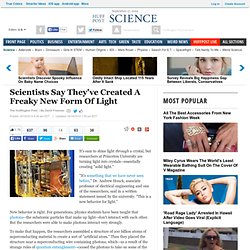 " "It's something that we have never seen before," Dr. Andrew Houck, associate professor of electrical engineering and one of the researchers, said in a written statement issued by the university. "This is a new behavior for light. " New behavior is right. For generations, physics students have been taught that photons--the subatomic particles that make up light--don't interact with each other. 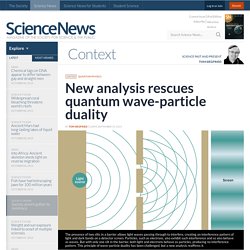 Stop the presses. You can't get entangled without a wormhole: Physicist finds entanglement instantly gives rise to a wormhole. Quantum entanglement is one of the more bizarre theories to come out of the study of quantum mechanics -- so strange, in fact, that Albert Einstein famously referred to it as "spooky action at a distance. 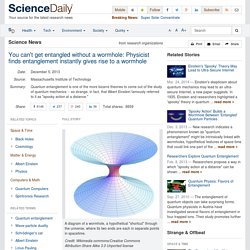 " Essentially, entanglement involves two particles, each occupying multiple states at once -- a condition referred to as superposition. For example, both particles may simultaneously spin clockwise and counterclockwise. Peter Higgs: I wouldn't be productive enough for today's academic system. Peter Higgs, the British physicist who gave his name to the Higgs boson, believes no university would employ him in today's academic system because he would not be considered "productive" enough. 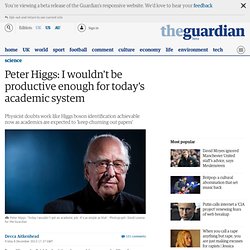 The emeritus professor at Edinburgh University, who says he has never sent an email, browsed the internet or even made a mobile phone call, published fewer than 10 papers after his groundbreaking work, which identified the mechanism by which subatomic material acquires mass, was published in 1964. He doubts a similar breakthrough could be achieved in today's academic culture, because of the expectations on academics to collaborate and keep churning out papers. He said: "It's difficult to imagine how I would ever have enough peace and quiet in the present sort of climate to do what I did in 1964. " Speaking to the Guardian en route to Stockholm to receive the 2013 Nobel prize for science, Higgs, 84, said he would almost certainly have been sacked had he not been nominated for the Nobel in 1980. Possibility of cloning quantum information from the past. Popular television shows such as "Doctor Who" have brought the idea of time travel into the vernacular of popular culture. 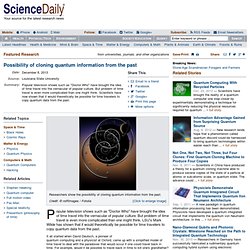 But problem of time travel is even more complicated than one might think. LSU's Mark Wilde has shown that it would theoretically be possible for time travelers to copy quantum data from the past. It all started when David Deutsch, a pioneer of quantum computing and a physicist at Oxford, came up with a simplified model of time travel to deal with the paradoxes that would occur if one could travel back in time. For example, would it be possible to travel back in time to kill one's grandfather? In the Grandfather paradox, a time traveler faces the problem that if he kills his grandfather back in time, then he himself is never born, and consequently is unable to travel through time to kill his grandfather, and so on. Quantum effects help cells capture light, but the details are obscure. 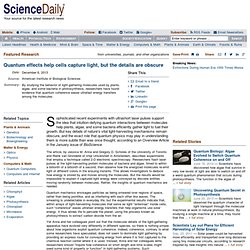 But key details of nature's vital light-harvesting mechanisms remain obscure, and the exact role that quantum physics may play in understanding them is more subtle than was once thought, according to an Overview Article in the January issue of BioScience. The article, by Jessica M. Time Travel Simulation Resolves “Grandfather Paradox” On June 28, 2009, the world-famous physicist Stephen Hawking threw a party at the University of Cambridge, complete with balloons, hors d'oeuvres and iced champagne. 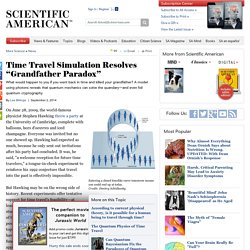 Everyone was invited but no one showed up. Hawking had expected as much, because he only sent out invitations after his party had concluded. It was, he said, "a welcome reception for future time travelers," a tongue-in-cheek experiment to reinforce his 1992 conjecture that travel into the past is effectively impossible. But Hawking may be on the wrong side of history. Freaky Physics Experiment May Prove Our Universe Is A Two-Dimensional Hologram. Everyone knows the universe exists in three dimensions, right? 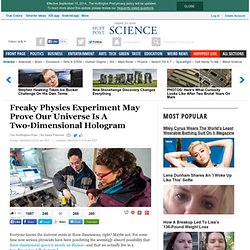 Maybe not. Scientists Refine Warp-Drive Concept Using Space-Time Distortion. First Posted: May 27, 2013 03:16 PM EDT At the start of 2013, a research paper was submitted to the Astrophysical Journal and made public on arxiv.org about the discovery of 15 new planets, which add to the dozens of potentially habitable candidates out there. To travel to these planets in any meaningful time requires science to overcome the problem of the vast distances in the universe. Even the closest exoplanet found so far is four light years or 24 trillion miles away.

Más difícil todavía: cómo fotografiar al gato de Schrödinger... sin verlo. Más difícil todavía: cómo fotografiar al gato de Schrödinger... sin verlo. Newfound ‘Tetraquark’ Fuels Quantum Debate. In August 2003, an experiment at the KEKB particle accelerator in Japan found hints of an unexpected particle: A composite of elementary building blocks called quarks, it contained not two quarks like mesons or three like the protons and neutrons that constitute all visible matter, but four — a number that theoretical physicists had come to think the laws of nature did not permit. This candidate “tetraquark” disintegrated so quickly that it seemed a stretch to call it a particle at all. But as similar formations appeared in experiments around the world, they incited a fierce debate among experts about the correct picture of matter at the quantum scale. Holographic universe experiment begins. A unique experiment at Fermi National Accelerator Laboratory has started collecting data that will answer some mind-bending questions about our universe—including whether we live in a hologram.

Much like characters on a television show would not know that their seemingly 3-D world exists only on a 2-D screen, we could be clueless that our 3-D space is just an illusion. The information about everything in our universe could actually be encoded in tiny packets in two dimensions. Signs Of Strange Subatomic Particle Seen For First Time Ever. Hints of a mysterious particle that has been long suspected to exist but has never been spotted are being revealed in a new experiment. So far, the elusive particles, called extra-heavy strange baryons, haven't been seen directly, but they are leaving tantalizing hints of their existence. High-energy particle collisions reveal the unexpected. The nucleus of an atom is composed of protons and neutrons, which are themselves made up of elementary particles called quarks and gluons. Observing these elementary particles is difficult and typically involves smashing atoms together at close to the speed of light to observe emissions from high-energy collisions.

El mecanismo de Higgs para estudiantes de bachillerato I. CERN People - UNREQUITED LOVE: SUPERSYMMETRY. A 34-Step Guide To String Theory, As Explained By Cats. Physicists Map Path Of Quantum Particles For First Time Ever. For the first time ever, physicists have mapped the path that particles are most likely to take when moving from one quantum state to another. In physics, a concept called the "path of least action" describes the trajectory that an object is most likely to follow, similar to the familiar concept of the "path of least resistance.

" For example, a tossed football follows a parabolic arc through the air instead of spinning off in crazy loops or zigzags. That's because a parabola path requires fewer "actions" than a looped or zigzag path. However, physicists didn't know whether quantum particles, like electrons, neutrinos or photons, follow the same rule. Hunt for dark matter takes physicists deep below earth's surface, where WIMPS can't hide.

Fairly Simple Math Could Bridge Quantum Mechanics and General Relativity. From Nature magazine. Spooky physics phenomenon may link universe's wormholes. Particle Measurement Sidesteps the Uncertainty Principle. How Quantum Mechanics Helps Us Breathe. What Is The Speed Of Dark? Quantum Teleportation Achieved over Record Distances. The views expressed are those of the author and are not necessarily those of Scientific American. What's The Deal With Metal In The Microwave? There’s an Easy (And Tasty) Way to Measure the Speed of Light at Home. Using the Higgs boson to search for clues. What is Antimatter? The quantum dance of oxygen. Nobel laureates offer new interpretations of quantum mysteries. Proving uncertainty: First rigorous formulation supporting Heisenberg's famous 1927 principle.