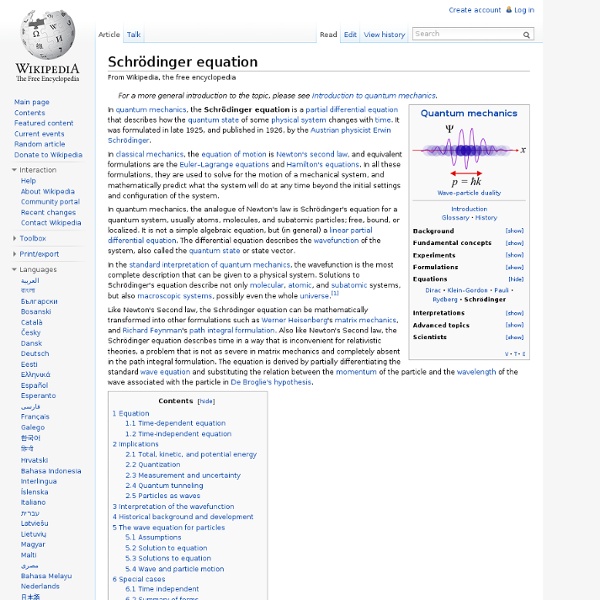 In quantum mechanics, the Schrödinger equation is a partial differential equation that describes how the quantum state of some physical system changes with time. It was formulated in late 1925, and published in 1926, by the Austrian physicist Erwin Schrödinger.[1] In classical mechanics, the equation of motion is Newton's second law, and equivalent formulations are the Euler–Lagrange equations and Hamilton's equations. All of these formulations are used to solve for the motion of a mechanical system and mathematically predict what the system will do at any time beyond the initial settings and configuration of the system. In quantum mechanics, the analogue of Newton's law is Schrödinger's equation for a quantum system (usually atoms, molecules, and subatomic particles whether free, bound, or localized). It is not a simple algebraic equation, but (in general) a linear partial differential equation. The concept of a state vector is a fundamental postulate of quantum mechanics.

Emergentism In philosophy, emergentism is the belief in emergence, particularly as it involves consciousness and the philosophy of mind, and as it contrasts (or not) with reductionism. A property of a system is said to be emergent if it is in some sense more than the "sum" of the properties of the system's parts. An emergent property is said to be dependent on some more basic properties (and their relationships and configuration), so that it can have no separate existence. However, a degree of independence is also asserted of emergent properties, so that they are not identical to, or reducible to, or predictable from, or deducible from their bases.

Cancer Metabolomics Keynote Speakers: Lewis C. Cantley (Beth Israel Deaconess Medical Center and Harvard Medical School) and Craig Thompson (Memorial Sloan-Kettering Cancer Center)Presented by Hot Topics in Life Sciences Reported by Sarah Webb | Posted April 23, 2012 Overview In the early part of the 20th century, German biochemist Otto Warburg observed that tumor tissues and normal tissues metabolize glucose differently. Antony Valentini Antony Valentini is a theoretical physicist and a professor at Clemson University. He is known for his work on the foundations of quantum physics.[1] Education and career[edit] Valentini obtained an undergraduate degree from Cambridge University, then earned his Ph.D. in 1992[2] with Dennis Sciama at the International School for Advanced Studies (ISAS) in Trieste, Italy.[1][3] In 1999, after seven years in Italy, he took up a post-doc grant to work at the Imperial College with Lee Smolin and Christopher Isham.[1]

Particle in a box In quantum mechanics, the particle in a box model (also known as the infinite potential well or the infinite square well) describes a particle free to move in a small space surrounded by impenetrable barriers. The model is mainly used as a hypothetical example to illustrate the differences between classical and quantum systems. In classical systems, for example a ball trapped inside a large box, the particle can move at any speed within the box and it is no more likely to be found at one position than another. However, when the well becomes very narrow (on the scale of a few nanometers), quantum effects become important. The particle may only occupy certain positive energy levels.

Emergence In philosophy, systems theory, science, and art, emergence is a process whereby larger entities, patterns, and regularities arise through interactions among smaller or simpler entities that themselves do not exhibit such properties. Emergence is central in theories of integrative levels and of complex systems. For instance, the phenomenon life as studied in biology is commonly perceived as an emergent property of interacting molecules as studied in chemistry, whose phenomena reflect interactions among elementary particles, modeled in particle physics, that at such higher mass—via substantial conglomeration—exhibit motion as modeled in gravitational physics. Matrix mechanics Matrix mechanics is a formulation of quantum mechanics created by Werner Heisenberg, Max Born, and Pascual Jordan in 1925. In some contrast to the wave formulation, it produces spectra of energy operators by purely algebraic, ladder operator, methods.[1] Relying on these methods, Pauli derived the hydrogen atom spectrum in 1926,[2] before the development of wave mechanics. Development of matrix mechanics[edit] In 1925, Werner Heisenberg, Max Born, and Pascual Jordan formulated the matrix mechanics representation of quantum mechanics.