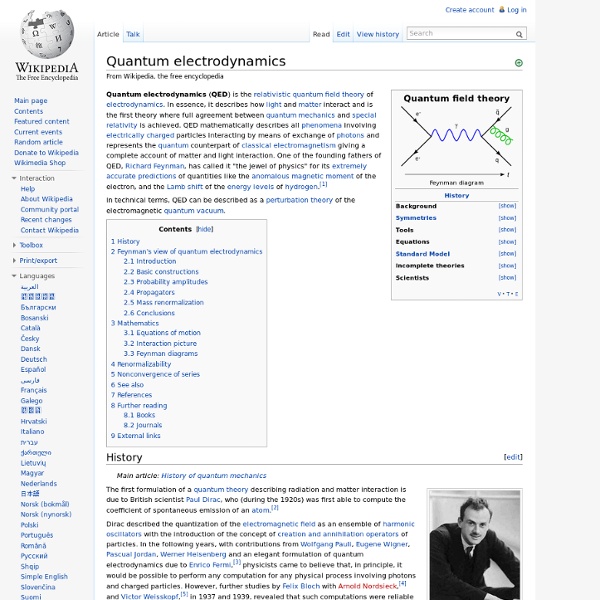 In particle physics, quantum electrodynamics (QED) is the relativistic quantum field theory of electrodynamics. In essence, it describes how light and matter interact and is the first theory where full agreement between quantum mechanics and special relativity is achieved. QED mathematically describes all phenomena involving electrically charged particles interacting by means of exchange of photons and represents the quantum counterpart of classical electromagnetism giving a complete account of matter and light interaction. History[edit] The first formulation of a quantum theory describing radiation and matter interaction is attributed to British scientist Paul Dirac, who (during the 1920s) was first able to compute the coefficient of spontaneous emission of an atom.[2] Difficulties with the theory increased through the end of 1940. QED has served as the model and template for all subsequent quantum field theories. Feynman's view of quantum electrodynamics[edit] Introduction[edit] or Related:  QUANTUM PHYSICS • Leseliste

First quantization A first quantization of a physical system is a semi-classical treatment of quantum mechanics, in which particles or physical objects are treated using quantum wave functions but the surrounding environment (for example a potential well or a bulk electromagnetic field or gravitational field) is treated classically. First quantization is appropriate for studying a single quantum-mechanical system being controlled by a laboratory apparatus that is itself large enough that classical mechanics is applicable to most of the apparatus. Theoretical background[edit] The starting point is the notion of quantum states and the observables of the system under consideration. Quantum theory postulates that all quantum states are represented by state vectors in a Hilbert space, and that all observables are represented by Hermitian operators acting on that space.[1] Parallel state vectors represent the same physical state, and therefore one mostly deals with normalized state vectors. , i. e and . as . . . .

Vector From Wikipedia, the free encyclopedia Vector may refer to: In mathematics and physics[edit] In computer science[edit] In biology[edit] In business[edit] In entertainment[edit] Fictional characters and elements[edit] Other uses[edit] See also[edit] Single and many-particle Quantum mechanics Electric field Electric field lines emanating from a point positive electric charge suspended over an infinite sheet of conducting material. Qualitative description[edit] An electric field that changes with time, such as due to the motion of charged particles producing the field, influences the local magnetic field. That is: the electric and magnetic fields are not separate phenomena; what one observer perceives as an electric field, another observer in a different frame of reference perceives as a mixture of electric and magnetic fields. For this reason, one speaks of "electromagnetism" or "electromagnetic fields". In quantum electrodynamics, disturbances in the electromagnetic fields are called photons. Definition[edit] Electric Field[edit] Consider a point charge q with position (x,y,z). Notice that the magnitude of the electric field has dimensions of Force/Charge. Superposition[edit] Array of discrete point charges[edit] Electric fields satisfy the superposition principle. Continuum of charges[edit]

Dimensional analysis Dimensional analysis is routinely used as a check on the plausibility of derived equations and computations. It is also used to categorize types of physical quantities and units based on their relationship to or dependence on other units. Great principle of similitude[edit] The basic principle of dimensional analysis was known to Isaac Newton (1686) who referred to it as the "Great Principle of Similitude".[1] James Clerk Maxwell played a major role in establishing modern use of dimensional analysis by distinguishing mass, length, and time as fundamental units, while referring to other units as derived.[2] The 19th-century French mathematician Joseph Fourier made important contributions[3] based on the idea that physical laws like F = ma should be independent of the units employed to measure the physical variables. Definition[edit] The term dimension is more abstract than scale unit: mass is a dimension, while kilograms are a scale unit (choice of standard) in the mass dimension.

Lagrangian formalism Tests of special relativity Special relativity is a physical theory that plays a fundamental role in the description of all physical phenomena, as long as gravitation is not significant. Many experiments played (and still play) an important role in its development and justification. The strength of the theory lies in its unique ability to correctly predict to high precision the outcome of an extremely diverse range of experiments. Repeats of many of those experiments are still being conducted with steadily increased precision, with modern experiments focusing on effects such as at the Planck scale and in the neutrino sector. Their results are consistent with the predictions of special relativity. Collections of various tests were given by Jakob Laub,[1] Zhang,[2] Mattingly,[3] Clifford Will,[4] and Roberts/Schleif.[5] Special relativity is restricted to flat spacetime, i.e., to all phenomena without significant influence of gravitation. Experiments paving the way to relativity[edit] First-order experiments[edit]

Second quantization Second quantization is a powerful procedure used in quantum field theory for describing the many-particle systems by quantizing the fields using a basis that describes the number of particles occupying each state in a complete set of single-particle states. This differs from the first quantization, which uses the single-particle states as basis. Introduction[edit] The starting point of this formalism is the notion of indistinguishability of particles that bring us to use determinants of single-particle states as a basis of the Hilbert space of N-particles states[clarification needed]. The occupation number representation[edit] Consider an ordered and complete single-particle basis , where is the set of all states available for the single particle. . The notation means that there are particles in the state . which obeys For fermions can be 0 or 1, while for bosons it can be any non negative number The space spanned by the occupation number basis is denoted the Fock space. Bosons[edit] and creation .

Classical field theory A physical field can be thought of as the assignment of a physical quantity at each point of space and time. For example, in a weather forecast, the wind velocity during a day over a country is described by assigning a vector to each point in space. Each vector represents the direction of the movement of air at that point. As the day progresses, the directions in which the vectors point change as the directions of the wind change. Descriptions of physical fields were given before the advent of relativity theory and then revised in light of this theory. Non-relativistic field theories[edit] Some of the simplest physical fields are vector force fields. Newtonian gravitation[edit] A classical field theory describing gravity is Newtonian gravitation, which describes the gravitational force as a mutual interaction between two masses. Any massive body M has a gravitational field g which describes its influence on other massive bodies. where Electromagnetism[edit] Electrostatics[edit] . . .

Tensor Cauchy stress tensor, a second-order tensor. The tensor's components, in a three-dimensional Cartesian coordinate system, form the matrix whose columns are the stresses (forces per unit area) acting on the e1, e2, and e3 faces of the cube. Tensors are used to represent correspondences between sets of geometric vectors. For example, the Cauchy stress tensor T takes a direction v as input and produces the stress T(v) on the surface normal to this vector for output thus expressing a relationship between these two vectors, shown in the figure (right). Because they express a relationship between vectors, tensors themselves must be independent of a particular choice of coordinate system. Tensors are important in physics because they provide a concise mathematical framework for formulating and solving physics problems in areas such as elasticity, fluid mechanics, and general relativity. Definition[edit] There are several approaches to defining tensors. As multidimensional arrays[edit] as, .