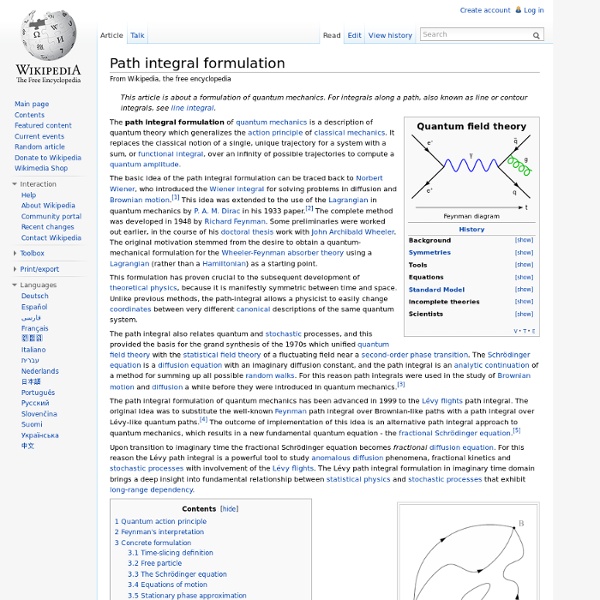 The path integral also relates quantum and stochastic processes, and this provided the basis for the grand synthesis of the 1970s which unified quantum field theory with the statistical field theory of a fluctuating field near a second-order phase transition. The Schrödinger equation is a diffusion equation with an imaginary diffusion constant, and the path integral is an analytic continuation of a method for summing up all possible random walks. For this reason path integrals were used in the study of Brownian motion and diffusion a while before they were introduced in quantum mechanics.[3] These are just three of the paths that contribute to the quantum amplitude for a particle moving from point A at some time t0 to point B at some other time t1. Quantum action principle[edit] But the Hamiltonian in classical mechanics is derived from a Lagrangian, which is a more fundamental quantity considering special relativity. and where and the partial derivative now is with respect to p at fixed q. Related:  QUANTUM PHYSICS

Scattering theory Top: the real part of a plane wave travelling upwards. Bottom: The real part of the field after inserting in the path of the plane wave a small transparent disk of index of refraction higher than the index of the surrounding medium. This object scatters part of the wave field, although at any individual point, the wave's frequency and wavelength remain intact. In mathematics and physics, scattering theory is a framework for studying and understanding the scattering of waves and particles. Prosaically, wave scattering corresponds to the collision and scattering of a wave with some material object, for instance sunlight scattered by rain drops to form a rainbow. Since its early statement for radiolocation, the problem has found vast number of applications, such as echolocation, geophysical survey, nondestructive testing, medical imaging and quantum field theory, to name just a few. Conceptual underpinnings[edit] Composite targets and range equations[edit] In theoretical physics[edit] [edit]

Einstein–Maxwell–Dirac equations Einstein–Maxwell–Dirac equations (EMD) are related to quantum field theory. The current Big Bang Model is a quantum field theory in a curved spacetime. Unfortunately, no such theory is mathematically well-defined; in spite of this, theoreticians claim to extract information from this hypothetical theory. On the other hand, the super-classical limit of the not mathematically well-defined QED in a curved spacetime is the mathematically well-defined Einstein–Maxwell–Dirac system. (One could get a similar system for the standard model.) As a super theory, EMD violates the positivity condition in the Penrose–Hawking singularity theorems. The Einstein–Yang–Mills–Dirac Equations provide an alternative approach to a Cyclic Universe which Penrose has recently been advocating. One way of trying to construct a rigorous QED and beyond is to attempt to apply the deformation quantization program to MD, and more generally, EMD. Program for SCESM[edit] The Super-Classical Einstein-Standard Model:

Schrödinger picture In physics, the Schrödinger picture (also called the Schrödinger representation[1]) is a formulation of quantum mechanics in which the state vectors evolve in time, but the operators (observables and others) are constant with respect to time.[2][3] This differs from the Heisenberg picture which keeps the states constant while the observables evolve in time, and from the interaction picture in which both the states and the observables evolve in time. The Schrödinger and Heisenberg pictures are related as active and passive transformations and have the same measurement statistics. In the Schrödinger picture, the state of a system evolves with time. The evolution for a closed quantum system is brought about by a unitary operator, the time evolution operator. For time evolution from a state vector at time to a state vector , the time-evolution operator is commonly written , and one has where the exponent is evaluated via its Taylor series. Background[edit] and returns some other ket , or both.

Schrödinger equation In quantum mechanics, the Schrödinger equation is a partial differential equation that describes how the quantum state of some physical system changes with time. It was formulated in late 1925, and published in 1926, by the Austrian physicist Erwin Schrödinger.[1] In classical mechanics, the equation of motion is Newton's second law, and equivalent formulations are the Euler–Lagrange equations and Hamilton's equations. All of these formulations are used to solve for the motion of a mechanical system and mathematically predict what the system will do at any time beyond the initial settings and configuration of the system. In quantum mechanics, the analogue of Newton's law is Schrödinger's equation for a quantum system (usually atoms, molecules, and subatomic particles whether free, bound, or localized). It is not a simple algebraic equation, but (in general) a linear partial differential equation. The concept of a state vector is a fundamental postulate of quantum mechanics.

Quantum statistical mechanics Expectation[edit] From classical probability theory, we know that the expectation of a random variable X is completely determined by its distribution DX by assuming, of course, that the random variable is integrable or that the random variable is non-negative. Similarly, let A be an observable of a quantum mechanical system. uniquely determines A and conversely, is uniquely determined by A. Similarly, the expected value of A is defined in terms of the probability distribution DA by Note that this expectation is relative to the mixed state S which is used in the definition of DA. Remark. One can easily show: Note that if S is a pure state corresponding to the vector ψ, then: Von Neumann entropy[edit] Of particular significance for describing randomness of a state is the von Neumann entropy of S formally defined by Actually, the operator S log2 S is not necessarily trace-class. and we define The convention is that , since an event with probability zero should not contribute to the entropy. and is