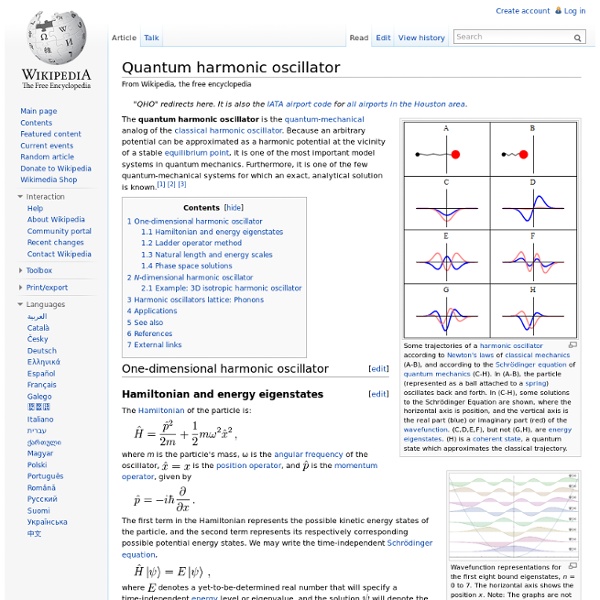 Some trajectories of a harmonic oscillator according to Newton's laws of classical mechanics (A-B), and according to the Schrödinger equation of quantum mechanics (C-H). In A-B, the particle (represented as a ball attached to a spring) oscillates back and forth. In C-H, some solutions to the Schrödinger Equation are shown, where the horizontal axis is position, and the vertical axis is the real part (blue) or imaginary part (red) of the wavefunction. The quantum harmonic oscillator is the quantum-mechanical analog of the classical harmonic oscillator. One-dimensional harmonic oscillator[edit] Hamiltonian and energy eigenstates[edit] Wavefunction representations for the first eight bound eigenstates, n = 0 to 7. Corresponding probability densities. where m is the particle's mass, ω is the angular frequency of the oscillator, is the position operator, and is the momentum operator, given by One may write the time-independent Schrödinger equation, The functions Hn are the Hermite polynomials, and Related:  QUANTUM PHYSICS 2 • Physics

Doughnut theory of the universe Bloom Toroidal Model of the Universe The doughnut theory of the universe is an informal description of the theory that the shape of the universe is a three-dimensional torus. The name comes from the shape of a doughnut, whose surface has the topology of a two-dimensional torus. The foundation for the doughnut theory started with Bell Lab’s discovery of cosmic microwave background (CMB). Supporting evidence[edit] Dr. Cosmic Background Explorer (COBE)[edit] The Cosmic Background Explorer was an explorer satellite launched in 1989 by NASA that used a Far Infrared Absolute Spectrometer (FIRAS) to measure the radiation of the universe.[2] Led by researchers John C. Wilkinson Microwave Anisotropy Probe (WMAP)[edit] WMAP cosmic microwave background map The Wilkinson Microwave Anisotropy Probe (WMAP) was launched in 2001 as NASA’s second explorer satellite intended to map the precise distribution of CMB across the universe. Notes and references[edit] Notes References External links[edit]

Birefringence A calcite crystal laid upon a graph paper with blue lines showing the double refraction Doubly refracted image as seen through a calcite crystal, seen through a rotating polarizing filter illustrating the opposite polarization states of the two images. Explanation[edit] The simplest (and most common) type of birefringence is that of materials with uniaxial anisotropy. What's more, the extraordinary ray is an inhomogeneous wave whose power flow (given by the Poynting vector) is not exactly parallel to the wave vector. When the light propagates either along or orthogonal to the optic axis, such a lateral shift does not occur. The more general case of biaxially anisotropic materials, also known as trirefringent[citation needed] materials, is substantially more complex.[3] Then there are three refractive indices corresponding to three principal axes of the crystal. Sources of optical birefringence[edit] Examples of uniaxial birefringent materials[edit] Fast and slow rays[edit] . and

Solution of Schrödinger equation for a step potential In quantum mechanics and scattering theory, the one-dimensional step potential is an idealized system used to model incident, reflected and transmitted matter waves. The problem consists of solving the time-independent Schrödinger equation for a particle with a step-like potential in one dimension. Typically, the potential is modelled as a Heaviside step function. Calculation[edit] Schrödinger equation and potential function[edit] Scattering at a finite potential step of height V0, shown in green. The time-independent Schrödinger equation for the wave function is The barrier is positioned at x = 0, though any position x0 may be chosen without changing the results, simply by shifting position of the step by −x0. The first term in the Hamiltonian, is the kinetic energy of the particle. Solution[edit] The step divides space in two parts: x < 0 and x > 0. both of which have the same form as the De Broglie relation (in one dimension) Boundary conditions[edit] Transmission and reflection[edit]

Cotton–Mouton effect In physical optics, the Cotton–Mouton effect refers to birefringence in a liquid in the presence of a constant transverse magnetic field. It is a similar but stronger effect than the Voigt effect (in which the medium is a gas instead of a liquid). The electric analog is the Kerr effect. It was discovered in 1907 by Aimé Cotton and Henri Mouton, working in collaboration. When a linearly polarized wave propagates perpendicular to magnetic field (e.g. in a magnetized plasma), it can become elliptized. Because a linearly polarized wave is some combination of in-phase X & O modes, and because X & O waves propagate with different phase velocities, this causes elliptization of the emerging beam. Cotton effect