Forbes Welcome. Thanks for coming to Forbes. 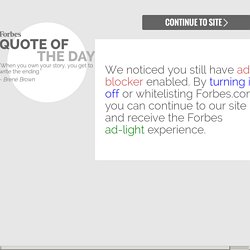 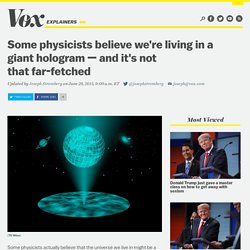 The idea isn't that the universe is some sort of fake simulation out of The Matrix, but rather that even though we appear to live in a three-dimensional universe, it might only have two dimensions. It's called the holographic principle. The thinking goes like this: Some distant two-dimensional surface contains all the data needed to fully describe our world — and much like in a hologram, this data is projected to appear in three dimensions. Like the characters on a TV screen, we live on a flat surface that happens to look like it has depth. The laws of physics seem to make more sense when written in two dimensions than in three It might sound absurd. "It's not considered some wild speculation among most theoretical physicists," says Leonard Susskind, the Stanford physicist who first formally defined the idea decades ago.

But there's an important distinction to be made here. Vox Featured Video. QUANTUM PHYSICS 2. Quantum. New math and quantum mechanics: Fluid mechanics suggests alternative to quantum orthodoxy. The central mystery of quantum mechanics is that small chunks of matter sometimes seem to behave like particles, sometimes like waves. 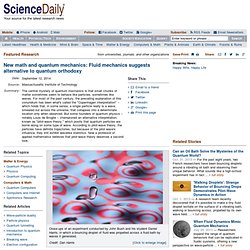 For most of the past century, the prevailing explanation of this conundrum has been what's called the "Copenhagen interpretation" -- which holds that, in some sense, a single particle really is a wave, smeared out across the universe, that collapses into a determinate location only when observed. But some founders of quantum physics -- notably Louis de Broglie -- championed an alternative interpretation, known as "pilot-wave theory," which posits that quantum particles are borne along on some type of wave. According to pilot-wave theory, the particles have definite trajectories, but because of the pilot wave's influence, they still exhibit wavelike statistics. John Bush, a professor of applied mathematics at MIT, believes that pilot-wave theory deserves a second look. 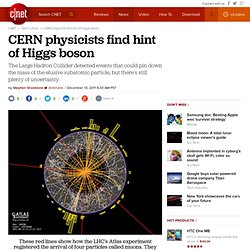 The search for the Higgs boson is the top priority of CERN's massive and expensive Large Hadron Collider near Geneva, Switzerland. Its Atlas experiment showed a statistically suspicious increase in activity that indicates the Higgs could be pinned down with a mass of 126 giga-electron-volts, and showing some important agreement, its independent CMS experiment found a possible result nearby at 124GeV.

"We observe an excess of events around mass of about 126 GeV," CERN physicist and Atlas leader Fabiola Gianotti said in slides presented today at a CERN seminar to physicists who applauded her results. That equates to about 212 quintillionths of a gram; by comparison, a proton is more than 100 times lighter with a mass of 0.938GeV. Her small sentence carries big import for physics. Stephen Colbert Interviews Neil deGrasse Tyson at Montclair Kimberley Academy - 2010-Jan-29.

Study: The Universe has almost stopped making new stars. Most of the stars that will ever exist have already been born, according to the most comprehensive survey of the age of the night sky. 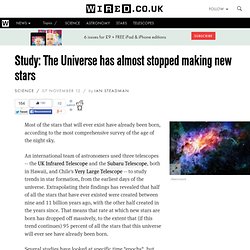 An international team of astronomers used three telescopes -- the UK Infrared Telescope and the Subaru Telescope, both in Hawaii, and Chile's Very Large Telescope -- to study trends in star formation, from the earliest days of the universe. Extrapolating their findings has revealed that half of all the stars that have ever existed were created between nine and 11 billion years ago, with the other half created in the years since. That means that rate at which new stars are born has dropped off massively, to the extent that (if this trend continues) 95 percent of all the stars that this universe will ever see have already been born.

Astrophysics: Fire in the hole! Andy Potts In March 2012, Joseph Polchinski began to contemplate suicide — at least in mathematical form. 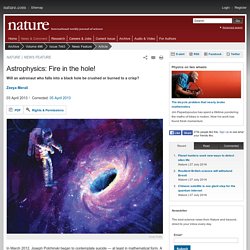 A string theorist at the Kavli Institute for Theoretical Physics in Santa Barbara, California, Polchinski was pondering what would happen to an astronaut who dived into a black hole. Obviously, he would die. But how?