What is Quantum Physics 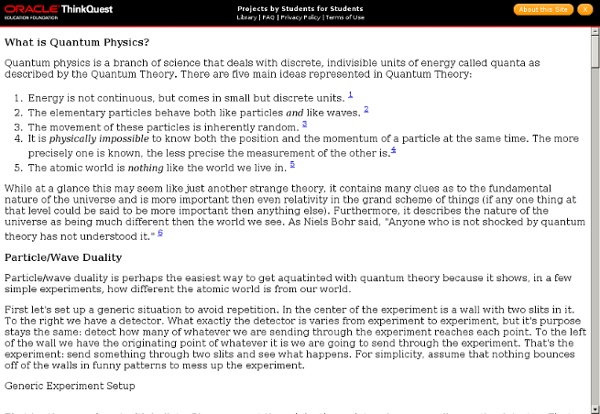 Quantum Physics, Spirituality And Your Thoughts, Beliefs and Emotions Quantum Physics, Spirituality And Your Life Experience : They're Not As Different Nor as Separate As You May Currently Think And Believe. Your Thoughts, Beliefs and Emotions Shape Your World. Now You'll FINALLY Understand Why in a Very Simplified Kind of Way!! Quantum Physics once understood not only can but will open your eyes to an unseen world few are aware of as well as enable and empower you to see the importance of consciously aligning your thoughts, emotions and actions with your heartfelt desires making the term Heaven on Earth more than just a nice thought or novel idea simply because, You CAN Quantum Physics Demystifies The Process Of Creation and Reveals The Simplicity of Conscious, Intentional and Purposeful as Well as Unconscious and Unintentional Manifestation What exactly is Quantum Physics?

Quantum entanglement Quantum entanglement is a physical phenomenon that occurs when pairs or groups of particles are generated or interact in ways such that the quantum state of each particle cannot be described independently – instead, a quantum state may be given for the system as a whole. Such phenomena were the subject of a 1935 paper by Albert Einstein, Boris Podolsky and Nathan Rosen,[1] describing what came to be known as the EPR paradox, and several papers by Erwin Schrödinger shortly thereafter.[2][3] Einstein and others considered such behavior to be impossible, as it violated the local realist view of causality (Einstein referred to it as "spooky action at a distance"),[4] and argued that the accepted formulation of quantum mechanics must therefore be incomplete. History[edit] However, they did not coin the word entanglement, nor did they generalize the special properties of the state they considered. Concept[edit] Meaning of entanglement[edit]

Higgs boson: how would you explain it to a seven-year-old? We've tried and, even with Ian Sample, some ping-pong balls and a bag of sugar, understanding what the Higgs boson is – and how scientists will know if they've found it – is proving difficult: Can you help us break it down into even simpler terms? If you're a scientist, a teacher or a physics fan with a knack for explaining big ideas and small particles, we're imploring you to help. • How would you explain Higgs boson to a seven-year-old? • Which analogy best explains what's happening at Cern?

Superstuff: When quantum goes big - physics-math - 16 January 2012 - New Scientist - StumbleUpon Read full article Continue reading page |1|2|3 Video: Superconducting disc locked in upside-down levitation In the coldest labs in the universe, bucketfuls of liquid flow uphill and solids pass through one another FOR centuries, con artists have convinced the masses that it is possible to defy gravity or walk through walls. Victorian audiences gasped at tricks of levitation involving crinolined ladies hovering over tables. Secret Teachings of All Ages: The Pythagorean Theory of Music and Color Sacred Texts Esoteric Index Previous Next p. 81 HARMONY is a state recognized by great philosophers as the immediate prerequisite of beauty. A compound is termed beautiful only when its parts are in harmonious combination. The world is called beautiful and its Creator is designated the Good because good perforce must act in conformity with its own nature; and good acting according to its own nature is harmony, because the good which it accomplishes is harmonious with the good which it is. Beauty, therefore, is harmony manifesting its own intrinsic nature in the world of form.

First quantization A first quantization of a physical system is a semi-classical treatment of quantum mechanics, in which particles or physical objects are treated using quantum wave functions but the surrounding environment (for example a potential well or a bulk electromagnetic field or gravitational field) is treated classically. First quantization is appropriate for studying a single quantum-mechanical system being controlled by a laboratory apparatus that is itself large enough that classical mechanics is applicable to most of the apparatus. Theoretical background[edit] The starting point is the notion of quantum states and the observables of the system under consideration. Quantum theory postulates that all quantum states are represented by state vectors in a Hilbert space, and that all observables are represented by Hermitian operators acting on that space.[1] Parallel state vectors represent the same physical state, and therefore one mostly deals with normalized state vectors. , i. e

Emotions – How To Understand, Identify and Release Your Emotions Home -> Free Articles - Emotions - How To Understand, Identify Release Your Emotions. · What Are Emotions – Feelings? Different people define emotions in different ways. Some make a distinction between emotions and feelings saying that a feeling is the response part of the emotion and that an emotion includes the situation or experience, the interpretation, the perception, and the response or feeling related to the experience of a particular situation. For the purposes of this article, I use the terms interchangeably. John D.

Rohan Rohan was the territory of the Rohirrim, a people of herdsmen and farmers on the northern borders of Gondor in Middle-earth. Well-known for their horses and cavalry, they were Gondor's most important ally. [edit] Background Harmony and Proportion: Pythagoras: Music and Space Pythagoras (6th century BC) observed that when the blacksmith struck his anvil, different notes were produced according to the weight of the hammer. Number (in this case amount of weight) seemed to govern musical tone... See if you can hear the sound in your imagination before it comes, by judging from the proportions of the string lengths. The first one's easy. Then mouse-over the strings (-if you dont hear anything you'll have to click, it depends on your set-up.) Again, number (in this case amount of space) seemed to govern musical tone.

Quantum electrodynamics In particle physics, quantum electrodynamics (QED) is the relativistic quantum field theory of electrodynamics. In essence, it describes how light and matter interact and is the first theory where full agreement between quantum mechanics and special relativity is achieved. QED mathematically describes all phenomena involving electrically charged particles interacting by means of exchange of photons and represents the quantum counterpart of classical electromagnetism giving a complete account of matter and light interaction. History[edit]