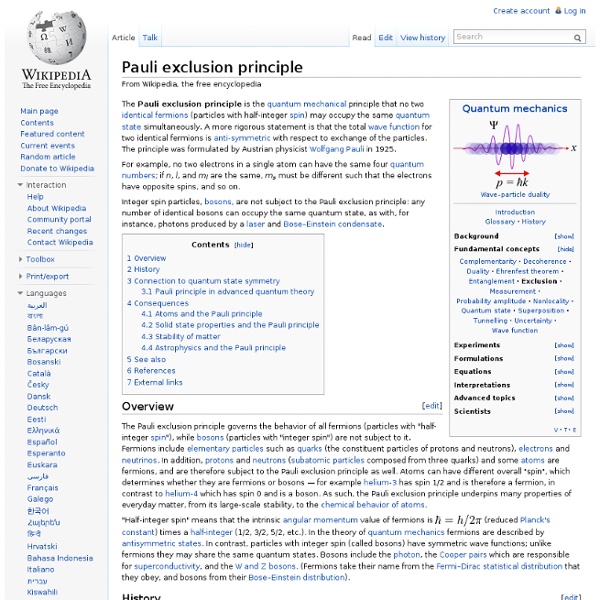 A more rigorous statement is that the total wave function for two identical fermions is anti-symmetric with respect to exchange of the particles. This means that the wave function changes its sign if the space and spin co-ordinates of any two particles are interchanged. Integer spin particles, bosons, are not subject to the Pauli exclusion principle: any number of identical bosons can occupy the same quantum state, as with, for instance, photons produced by a laser and Bose–Einstein condensate. Overview[edit] "Half-integer spin" means that the intrinsic angular momentum value of fermions is (reduced Planck's constant) times a half-integer (1/2, 3/2, 5/2, etc.). History[edit] In the early 20th century it became evident that atoms and molecules with even numbers of electrons are more chemically stable than those with odd numbers of electrons. Pauli looked for an explanation for these numbers, which were at first only empirical. Connection to quantum state symmetry[edit] and the other in state

Matter wave The de Broglie relations redirect here. In quantum mechanics, the concept of matter waves or de Broglie waves /dəˈbrɔɪ/ reflects the wave–particle duality of matter. The theory was proposed by Louis de Broglie in 1924 in his PhD thesis.[1] The de Broglie relations show that the wavelength is inversely proportional to the momentum of a particle and is also called de Broglie wavelength. Also the frequency of matter waves, as deduced by de Broglie, is directly proportional to the total energy E (sum of its rest energy and the kinetic energy) of a particle.[2] Historical context[edit] At the end of the 19th century, light was thought to consist of waves of electromagnetic fields which propagated according to Maxwell’s equations, while matter was thought to consist of localized particles (See history of wave and particle viewpoints). where is the frequency of the light and h is Planck’s constant. de Broglie relations[edit] Quantum mechanics[edit] where h is Planck's constant. Group velocity[edit]

Quantum decoherence Decoherence can be viewed as the loss of information from a system into the environment (often modeled as a heat bath),[2] since every system is loosely coupled with the energetic state of its surroundings. Viewed in isolation, the system's dynamics are non-unitary (although the combined system plus environment evolves in a unitary fashion).[3] Thus the dynamics of the system alone are irreversible. As with any coupling, entanglements are generated between the system and environment. These have the effect of sharing quantum information with—or transferring it to—the surroundings. Decoherence does not generate actual wave function collapse. It only provides an explanation for the observance of wave function collapse, as the quantum nature of the system "leaks" into the environment. Decoherence represents a challenge for the practical realization of quantum computers, since such machines are expected to rely heavily on the undisturbed evolution of quantum coherences. Mechanisms[edit] . .

Boson In quantum mechanics, a boson (/ˈboʊsɒn/,[1] /ˈboʊzɒn/[2]) is a particle that follows Bose–Einstein statistics. Bosons make up one of the two classes of particles, the other being fermions.[3] The name boson was coined by Paul Dirac[4] to commemorate the contribution of the Indian physicist Satyendra Nath Bose[5][6] in developing, with Einstein, Bose–Einstein statistics—which theorizes the characteristics of elementary particles.[7] Examples of bosons include fundamental particles such as photons, gluons, and W and Z bosons (the four force-carrying gauge bosons of the Standard Model), the recently discovered Higgs boson, and the hypothetical graviton of quantum gravity; composite particles (e.g. mesons and stable nuclei of even mass number such as deuterium (with one proton and one neutron, mass number = 2), helium-4, or lead-208[Note 1]); and some quasiparticles (e.g. Cooper pairs, plasmons, and phonons).[8]:130 Types[edit] Properties[edit] Elementary bosons[edit] Composite bosons[edit]

Holographic principle In a larger sense, the theory suggests that the entire universe can be seen as a two-dimensional information structure "painted" on the cosmological horizon[clarification needed], such that the three dimensions we observe are an effective description only at macroscopic scales and at low energies. Cosmological holography has not been made mathematically precise, partly because the particle horizon has a finite area and grows with time.[4][5] The holographic principle was inspired by black hole thermodynamics, which conjectures that the maximal entropy in any region scales with the radius squared, and not cubed as might be expected. In the case of a black hole, the insight was that the informational content of all the objects that have fallen into the hole might be entirely contained in surface fluctuations of the event horizon. Black hole entropy[edit] An object with entropy is microscopically random, like a hot gas. Black hole information paradox[edit] Limit on information density[edit]

Second quantization Second quantization is a powerful procedure used in quantum field theory for describing the many-particle systems by quantizing the fields using a basis that describes the number of particles occupying each state in a complete set of single-particle states. This differs from the first quantization, which uses the single-particle states as basis. Introduction[edit] The starting point of this formalism is the notion of indistinguishability of particles that bring us to use determinants of single-particle states as a basis of the Hilbert space of N-particles states[clarification needed]. The occupation number representation[edit] Consider an ordered and complete single-particle basis , where is the set of all states available for the single particle. . The notation means that there are particles in the state . which obeys For fermions can be 0 or 1, while for bosons it can be any non negative number The space spanned by the occupation number basis is denoted the Fock space. Bosons[edit] and creation .

Planck scale In particle physics and physical cosmology, the Planck scale (named after Max Planck) is an energy scale around 1.22 × 1019 GeV (which corresponds by the mass–energy equivalence to the Planck mass 2.17645 × 10−8 kg) at which quantum effects of gravity become strong. At this scale, present descriptions and theories of sub-atomic particle interactions in terms of quantum field theory break down and become inadequate, due to the impact of the apparent non-renormalizability of gravity within current theories. At the Planck scale, the strength of gravity is expected to become comparable with the other forces, and it is theorized that all the fundamental forces are unified at that scale, but the exact mechanism of this unification remains unknown. The term Planck scale can also refer to a length scale or time scale. The Planck length is related to Planck energy by the uncertainty principle. Theoretical ideas[edit] Experiments probing the Planck scale[edit] See also[edit] References[edit]

Field operators Uncertainty principle where ħ is the reduced Planck constant. The original heuristic argument that such a limit should exist was given by Heisenberg, after whom it is sometimes named the Heisenberg principle. This ascribes the uncertainty in the measurable quantities to the jolt-like disturbance triggered by the act of observation. Though widely repeated in textbooks, this physical argument is now known to be fundamentally misleading.[4][5] While the act of measurement does lead to uncertainty, the loss of precision is less than that predicted by Heisenberg's argument; the formal mathematical result remains valid, however. Since the uncertainty principle is such a basic result in quantum mechanics, typical experiments in quantum mechanics routinely observe aspects of it. Certain experiments, however, may deliberately test a particular form of the uncertainty principle as part of their main research program. Introduction[edit] Click to see animation. Wave mechanics interpretation[edit] . with yields where

Second Quantization Quantum mechanics Wavefunctions of the electron in a hydrogen atom at different energy levels. Quantum mechanics cannot predict the exact location of a particle in space, only the probability of finding it at different locations.[1] The brighter areas represent a higher probability of finding the electron. Quantum mechanics (QM; also known as quantum physics, quantum theory, the wave mechanical model, or matrix mechanics), including quantum field theory, is a fundamental theory in physics which describes nature at the smallest scales of atoms and subatomic particles.[2] Quantum mechanics gradually arose from theories to explain observations which could not be reconciled with classical physics, such as Max Planck's solution in 1900 to the black-body radiation problem, and from the correspondence between energy and frequency in Albert Einstein's 1905 paper which explained the photoelectric effect. History[edit] In 1838, Michael Faraday discovered cathode rays. where h is Planck's constant. Coulomb potential.