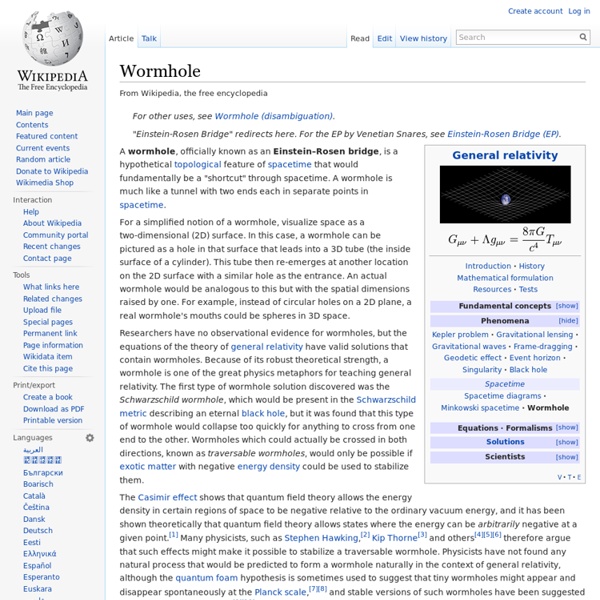 A wormhole, officially known as an Einstein–Rosen bridge, is a hypothetical topological feature of spacetime that would fundamentally be a "shortcut" through spacetime. A wormhole is much like a tunnel with two ends each in separate points in spacetime. For a simplified notion of a wormhole, visualize space as a two-dimensional (2D) surface. In this case, a wormhole can be pictured as a hole in that surface that leads into a 3D tube (the inside surface of a cylinder). This tube then re-emerges at another location on the 2D surface with a similar hole as the entrance. An actual wormhole would be analogous to this but with the spatial dimensions raised by one. Researchers have no observational evidence for wormholes, but the equations of the theory of general relativity have valid solutions that contain wormholes. "Embedding diagram" of a Schwarzschild wormhole (see below). Definition[edit] Characterizing inter-universe wormholes is more difficult. Schwarzschild wormholes[edit] Related:  QUANTUM PHYSICS • Quantum Thoughts • cosmos

Black hole A black hole is defined as a region of spacetime from which gravity prevents anything, including light, from escaping.[1] The theory of general relativity predicts that a sufficiently compact mass will deform spacetime to form a black hole.[2] Around a black hole, there is a mathematically defined surface called an event horizon that marks the point of no return. The hole is called "black" because it absorbs all the light that hits the horizon, reflecting nothing, just like a perfect black body in thermodynamics.[3][4] Quantum field theory in curved spacetime predicts that event horizons emit radiation like a black body with a finite temperature. This temperature is inversely proportional to the mass of the black hole, making it difficult to observe this radiation for black holes of stellar mass or greater. Objects whose gravity fields are too strong for light to escape were first considered in the 18th century by John Michell and Pierre-Simon Laplace. History General relativity

Weird Science Jack Sarfatti (CC) [disinfo ed.'s note: this original essay was first published by disinformation on January 28, 2001. Some links may have changed.] Author’s note: This interview was originally published in 21.C magazine (4/1996, The Unafesto): 54-59. Dr. The Bohemian physicist . . . contributes a balanced scientific non-establishment for this expanding society. Black holes, Alcubierre warp drives, traversable worm holes, and the quest for the Holy Grail of dark matter are outpacing the wildest SF fantasies in the public’s imagination. Sarfatti’s exotic theories are rarely discussed within the mainstream physics community. Master of the Vortex Yet Sarfatti’s theories of future causality – the future impacting on the present – are influencing the contemporary cultural meme pool. “Physics is the Conceptual Art of the late 20th Century,” Sarfatti claims. “After Timothy Leary, I’m the only Magus left!” “Censorship is to be fought. “The main new feature of the WWW is its dynamic nature.

Weird Science (Part 2) Sarfatti, left, with Fred Alan Wolf in Paris, 1973 (CC) [continues from Part 1] Into the Pandemonium In 1975, Sarfatti co-founded the legendary Physics-Consciousness Research Group with Esalen Institute’s Michael Murphy, funded by EST guru Werner Erhard. Murphy was investigating revelations of the USSR’s intensive parapsychological research projects, later setting up the Soviet-American Exchange Program at Esalen in the 1980s, which attracted the likes of Boris Yeltsin during his 1989 U.S. visit. Sarfatti gave seminars at Esalen, serving as a guiding influence behind Fritjoff Capra, Gary Zukav and other proponents of the 1970s “New Physics” movement, which explored links between quantum physics and Eastern mysticism. Stanford Research Institute’s Electronics & Bioengineering Laboratories were assigned to the project under the direction of Russell Targ, parodied in the film Ghostbusters (1984), as Dr. SDI: Rust In Peace Strange Loops and God-Phones ‘Who is Number One?’

STEPHEN HAWKING: How to build a time machine By STEPHEN HAWKING Created: 18:47 GMT, 27 April 2010 All you need is a wormhole, the Large Hadron Collider or a rocket that goes really, really fast 'Through the wormhole, the scientist can see himself as he was one minute ago. Hello. Time travel was once considered scientific heresy. To see how this might be possible, we need to look at time as physicists do - at the fourth dimension. But there is another kind of length, a length in time. To see what that means, let's imagine we're doing a bit of normal, everyday car travel. Let's indulge in a little science fiction for a moment. Physicists have been thinking about tunnels in time too, but we come at it from a different angle. Enlarge A wormhole is a theoretical 'tunnel' or shortcut, predicted by Einstein's theory of relativity, that links two places in space-time - visualised above as the contours of a 3-D map, where negative energy pulls space and time into the mouth of a tunnel, emerging in another universe. Nothing is flat or solid.

Loop quantum gravity More precisely, space can be viewed as an extremely fine fabric or network "woven" of finite loops. These networks of loops are called spin networks. The evolution of a spin network over time is called a spin foam. Today LQG is a vast area of research, developing in several directions, which involves about 50 research groups worldwide.[1] They all share the basic physical assumptions and the mathematical description of quantum space. Research into the physical consequences of the theory is proceeding in several directions. History[edit] The canonical version of the dynamics was put on firm ground by Thomas Thiemann, who defined an anomaly-free Hamiltonian operator, showing the existence of a mathematically consistent background-independent theory. General covariance and background independence[edit] In theoretical physics, general covariance is the invariance of the form of physical laws under arbitrary differentiable coordinate transformations. LQG is formally background independent. .

Einstein to shed light on black holes To understand how the universe was created, Einstein’s general theory of relativity needs to be unified with quantum mechanics. A Danish research team has come up with a theory of how this can be done. (Photo: Colourbox) Every single atom in your body was at one point created in the early universe, for example in supernova explosions – the first atoms being hydrogen atoms, which were presumably created soon after the Big Bang. This, at least, is the best explanation physicists have come up with so far. To understand the creation of our universe, we need to unify Einstein’s general theory of relativity and quantum mechanics. But now a research team from Copenhagen University’s Niels Bohr Institute has come up with a concrete framework for how this can be done. They are currently testing mathematical models which can gel the theories into one, and thereby contribute to our understanding of the Big Bang and black holes. The difference between gravity and quantum mechanics

Quantum "spooky action at a distance" travels at least 10,000 times faster than light Quantum entanglement, one of the odder aspects of quantum theory, links the properties of particles even when they are separated by large distances. When a property of one of a pair of entangled particles is measured, the other "immediately" settles down into a state compatible with that measurement. So how fast is "immediately"? According to research by Prof. Juan Yin and colleagues at the University of Science and Technology of China in Shanghai, the lower limit to the speed associated with entanglement dynamics – or "spooky action at a distance" – is at least 10,000 times faster than light. Despite playing a vital role in the development of quantum theory, Einstein felt philosophically at odds with its description of how the universe works. Niels Bohr and Albert Einstein debating quantum theory in the mid 1920s In 1935 Einstein and his coworkers discovered quantum entanglement lurking in the equations of quantum mechanics, and realized its utter strangeness.

Mad Scientist Worm-hole Generator This is always the hardest part because a worm-hole generator a work of art (not to mention maniacal genius); therefore, you should choose your parts carefully. You need something to house your generator. I used some sort of strainer, but ultimately, it's up to you. Then you need some parts, use whatever you want, just make sure you can explain how it works. If you can't then you probably won't be able to teleport anywhere. Look at the picture to see what I used. Same story as the Intro, here's the notes...Starting fom TOP LEFT and continuing as if you were reading.

There can be no other way! For Seti to eliminate this possibilty is absurd! by robster Aug 1

Exactly! Tell that to the scientists of the Seti program that still believe that the Ets travel only below the speed of light threshold! by gemini61 Aug 1

Is this a method used/exploited by visitors to our planet? How else can they travel so far? by robster Aug 1