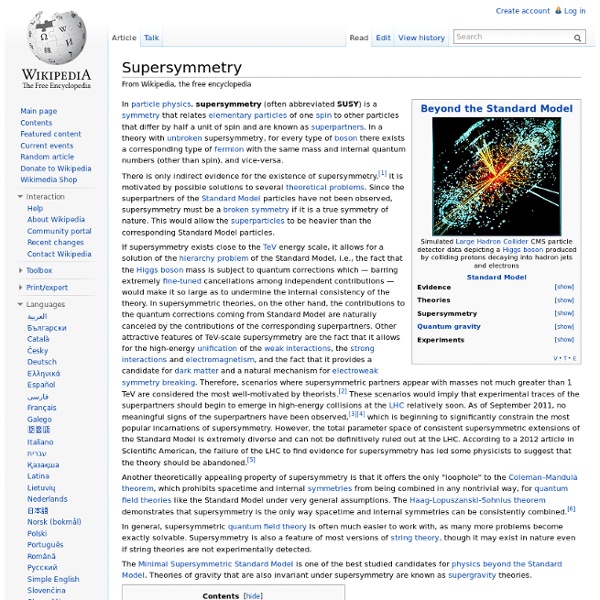 Grand Unified Theory A Grand Unified Theory (GUT) is a model in particle physics in which at high energy, the three gauge interactions of the Standard Model which define the electromagnetic, weak, and strong interactions, are merged into one single interaction characterized by one larger gauge symmetry and thus one unified coupling constant. During the grand unification epoch, the gauge force separated from the gravitational force. Models that do not unify all interactions using one simple Lie group as the gauge symmetry, but do so using semisimple groups, can exhibit similar properties and are sometimes referred to as Grand Unified Theories as well. Unifying gravity with the other three interactions would provide a theory of everything (TOE), rather than a GUT. Nevertheless, GUTs are often seen as an intermediate step towards a TOE. History[edit] Motivation[edit] Unification of matter particles[edit] Schematic representation of fermions and bosons in SU(5) GUT showing 5+10 split in the multiplets. SU(5)[edit] If

Supersymmetry StarTalk Live: The Particle Party (Part 2) Listen now: Season 3, Episode 19 Photo credit: Leslie Mullen StarTalk Live’s celebration of the discovery of the Higgs boson on July 11, 2012 continues as CERN physicist Kyle Cranmer clues us in to what’s next in the investigation of the Higgs, now that it turns out it isn’t exactly what they thought it would be. Co-Host:Eugene Mirman, comedian Guests: Bill Nye the Science GuyKyle Cranmer, NYU Assistant Professor of Physics and CERN physicistScott Adsit, comedian, 30 RockSarah Vowell, author Music:I Feel So Close To You by Calvin HarrisStar Wars: The Force Unleashed: Battle SongPredictable by Good CharlottePerfect Symmetry by KeaneParallel Universe by Red Hot Chili PeppersThe Future is Now by The OffspringA Thousand Miles by Vanessa CarltonUnexpected by NeginInternational Love by Pitbull with Chris Brown

Multivalued gauge transformations Time Machine EARTH-SIZED PLANET IN THE HABITABLE ZONE OF ANOTHER STAR: Using NASA's Kepler Space Telescope, astronomers have discovered the first Earth-size planet orbiting in the "habitable zone" of another star. The planet, named "Kepler-186f" orbits an M dwarf, or red dwarf, a class of stars that makes up 70 percent of the stars in the Milky Way: full story. THE TURQUOISE FRINGE: Lunar eclipses are supposed to be red, yet when the Moon passed through Earth's amber shadow on April 15th, many observers witnessed a softly-glowing band of turquoise blue. Robert and Elisabeth Slobins send this picture of the phenomenon from Fort Myers, Florida: The source of the turquoise is ozone. For years, Keen has been using lunar eclipses to probe the transparency of the stratosphere. To see the effects of ozone on the eclipse, you have to be looking at just the right moment. Realtime Eclipse Photo Gallery CHANCE OF M-CLASS FLARES: NOAA forecasters estimate a 60% chance of M-class flares today.

M-theory M-theory is a theory in physics that unifies all consistent versions of superstring theory. The existence of such a theory was first conjectured by Edward Witten at the string theory conference at the University of Southern California in the summer of 1995. Witten's announcement initiated a flurry of research activity known as the second superstring revolution. Background[edit] Quantum gravity and strings[edit] One of the deepest problems in modern physics is the problem of quantum gravity. Number of dimensions[edit] In everyday life, there are three familiar dimensions of space (up/down, left/right, and forward/backward), and there is one dimension of time (later/earlier). Despite the obvious relevance of four-dimensional spacetime for describing the physical world, there are several reasons why physicists often consider theories in other dimensions. Dualities[edit] Main articles: S-duality and T-duality A diagram of string theory dualities. and winding number in the dual description. .

Gauge theory The Four Fundamental Forces As of July 1, 2013 ThinkQuest has been discontinued. We would like to thank everyone for being a part of the ThinkQuest global community: Students - For your limitless creativity and innovation, which inspires us all. Teachers - For your passion in guiding students on their quest. Partners - For your unwavering support and evangelism. Parents - For supporting the use of technology not only as an instrument of learning, but as a means of creating knowledge. We encourage everyone to continue to “Think, Create and Collaborate,” unleashing the power of technology to teach, share, and inspire. Best wishes, The Oracle Education Foundation

Lattice gauge theory Basics[edit] In lattice gauge theory, the spacetime is Wick rotated into Euclidean space and discretized into a lattice with sites separated by distance and connected by links. In the most commonly considered cases, such as lattice QCD, fermion fields are defined at lattice sites (which leads to fermion doubling), while the gauge fields are defined on the links. That is, an element U of the compact Lie group G is assigned to each link. Yang–Mills action[edit] The Yang–Mills action is written on the lattice using Wilson loops (named after Kenneth G. There are many possible lattice Yang-Mills actions, depending on which Wilson loops are used in the action. . , making computations more accurate. Measurements and calculations[edit] This result of a Lattice QCD computation shows a meson, composed out of a quark and an antiquark. Quantities such as particle masses are stochastically calculated using techniques such as the Monte Carlo method. , where is the lattice action and . See also[edit]