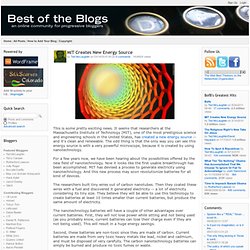 It seems that researchers at the Massachusetts Institute of Technology (MIT), one of the most prestigious science and engineering schools in the United States, has created a new energy source -- and it's clean and renewable. Heads Up, Hoverboarders: Here Comes Quantum Levitation. Few motifs of science fiction cinema have been more appealing to us than the subtle defiance of gravity offered by futuristic hovercraft. 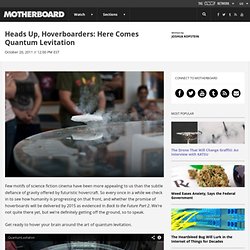 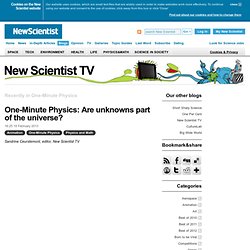 You may think of it as incorporating everything that exists - both on Earth and in space - but could it also include the unknown? In this One-Minute Physics episode, film-maker Henry Reich delves into the notion of the universe as described by physics, distinguishing between the whole universe and what's observable. He looks at the three components of the universe that we are sure of and whether mathematics could be included or not. Antimatter Academy - Briefing Room. Antimatter belt around Earth discovered by Pamela craft. 7 August 2011Last updated at 10:54 The antiprotons lie sandwiched between the inner and outer Van Allen belts (in red) around the Earth A thin band of antimatter particles called antiprotons enveloping the Earth has been spotted for the first time. 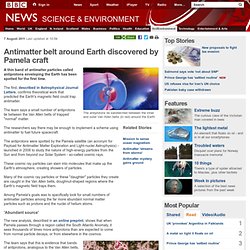 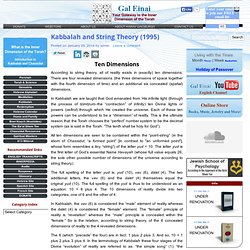 There are four revealed dimensions (the three dimensions of space together with the fourth dimension of time) and an additional six concealed (spatial) dimensions. Better lasers for optical communications. Long-distance, high speed communications depend on lasers. 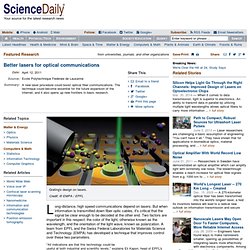 But when information is transmitted down fiber optic cables, it's critical that the signal be clear enough to be decoded at the other end. Two factors are important in this respect: the color of the light, otherwise known as the wavelength, and the orientation of the light wave, known as polarization. A team from EPFL and the Swiss Federal Laboratories for Materials Science and Technology (EMPA) has developed a technique that improves control over these two parameters. Rainbow-trapping scientist now strives to slow light waves even further. An electrical engineer at the University at Buffalo, who previously demonstrated experimentally the "rainbow trapping effect" -- a phenomenon that could boost optical data storage and communications -- is now working to capture all the colors of the rainbow. 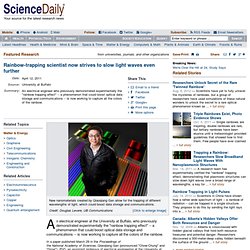 In a paper published March 29 in the Proceedings of the National Academy of Sciences, Qiaoqiang Gan (pronounced "Chow-Chung" and "Gone"), PhD, an assistant professor of electrical engineering at the University at Buffalo's School of Engineering and Applied Sciences, and his colleagues at Lehigh University, where he was a graduate student, described how they slowed broadband light waves using a type of material called nanoplasmonic structures. Gan explains that the ultimate goal is to achieve a breakthrough in optical communications called multiplexed, multiwavelength communications, where optical data can potentially be tamed at different wavelengths, thus greatly increasing processing and transmission capacity.

Search for dark matter moves one step closer to detecting elusive particle. Dark matter, the mysterious substance that may account for nearly 25 percent of the universe, has so far evaded direct observation. 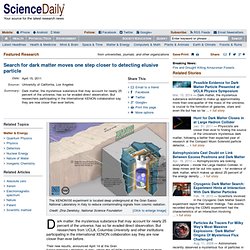 But researchers from UCLA, Columbia University and other institutions participating in the international XENON collaboration say they are now closer than ever before. Their new results, announced April 14 at the Gran Sasso National Laboratory in Italy, where the XENON experiment is housed deep beneath a mountain 70 miles west of Rome, represent the highest-sensitivity search for dark matter yet, with background noise 100 times lower than competing efforts. Dark matter is widely thought to be a kind of massive elementary particle that interacts weakly with ordinary matter. Physicists refer to these particles as WIMPS, for weakly interacting massive particles. The search for dark matter Ordinary matter, which makes up the stars, planets, gas and dust in our galaxy, emits or reflects light that can be observed using telescopes on Earth or in space. 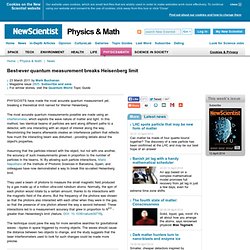 Quantum Dots Can Tag Individual Molecules With A Fluorescent Glow. A team of engineers at Ohio State University have packed a nanoparticle full of fluorescent blinking quantum dots. 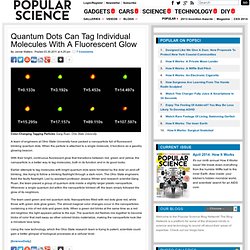 When the particle is attached to a single molecule, it functions as a gaudily glowing beacon. With their bright, continuous fluorescent glow that transitions between red, green and yellow, the nanoparticle is a better way to tag molecules, both in its function and in its good looks. Earlier attempts to tag molecules with bright quantum dots were hindered by the dots' on-and-off blinking, like trying to follow a blinking flashlight through a dark room. The Ohio State engineers fixed the faulty flashlight. Led by assistant professor Jessica Winter and research scientist Gang Ruan, the team placed a group of quantum dots inside a slightly larger plastic nanoparticle.

The team used green and red quantum dots. Warm Superconductors' Weird Behavior Could Indicate a New Phase of Matter. While studying the weird behavior of high-temperature superconductors, scientists may have found a new phase of matter, separate from solid, liquid, gas and plasma. Electrons in a pre-superconducting state apparently form a strange, distinct order, lining up in a way that has never been seen before. Superconductors are 100-percent-efficient materials that waste no energy. In them, electrons break off into pairs, conducting electricity with no resistance.

Engineered Metamaterials Could Recreate the Birth of Extra-Dimensional Universes in the Lab. Man-made metamaterials could theoretically bend light to create invisibility cloaks, or alter electromagnetic waves in ways nature never intended. Big Bang Recreated in a Metamaterial, Offers Evidence That Time Travel is Impossible. Metamaterials can be used to create desktop black holes and simulate multiverses; now a physicist is using them to prove time travel can't happen. In a new paper, University of Maryland professor and metamaterial theorist Igor Smolyaninov says mapping light distribution in a metamaterial can serve as a model for the flow of time. The model shows that the forward direction of time is unrelenting; you cannot curve back on time and go back to where you started.

You just have to build a desktop Big Bang to prove it. Holograms Powered By Quantum Effects Can Show True Color From Any Angle. Researchers Succeed in Quantum Teleportation of Light Waves. Are Aliens Living On Planets Inside Black Holes? Aliens could conceivably live on planets illuminated by the swirling mass of photons orbiting the singularity of a special type of black hole, according to a new theory. Della's Quantum Shamanism. Quantum Physic and the Kabbalah.