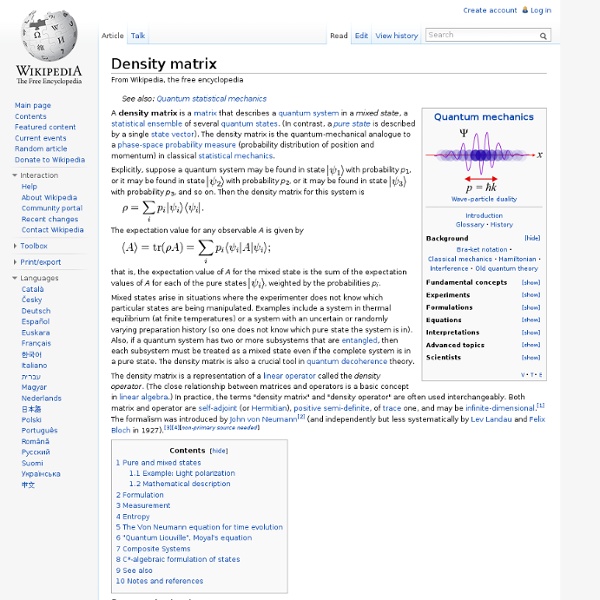 Einselection In quantum mechanics, einselection, short for environment - induced superselection, is a name coined by Wojciech H. Zurek[1] for a process which explains the phenomenon of wavefunction collapse and the emergence of classical descriptions of reality from quantum descriptions. Classicality is an emergent property induced in open quantum systems by their environments. Since only quasi-local, essentially classical states survive the decoherence process, einselection can in many ways explain the emergence of a (seemingly) classical reality in a fundamentally quantum universe (at least to local observers). Definition[edit] corresponding to different pointer states become orthogonal: Details[edit] To study einselection, an operational definition of pointer states has been introduced.[4][5] This is the "predictability sieve" criterion, based on an intuitive idea: Pointer states can be defined as the ones which become minimally entangled with the environment in the course of their evolution. ). .

Free particle How Cosmic Inflation Creates an Infinity of Universes [Video] Give a Gift & Get a Gift - Free! Applications From Eternity to Book Club: Chapter Eleven | Cosmic Variance Welcome to this week’s installment of the From Eternity to Here book club. Part Three of the book concludes with Chapter Eleven, “Quantum Time.” Excerpt: This distinction between “incomplete knowledge” and “intrinsic quantum indeterminacy” is worth dwelling on. Title notwithstanding, the point of the chapter is not that there’s some “quantum” version of time that we have to understand. However, we still need to talk about quantum mechanics for the purposes of this book, for one very good reason: we’ve been making a big deal about how the fundamental laws of physics are reversible, but wave function collapse (under the textbook Copenhagen interpretation) is an apparent counterexample. Along the way, I get to give my own perspective on what quantum mechanics really means. So I present a number of colorful examples of two-state systems involving cats and dogs.

Solution of Schrödinger equation for a step potential In quantum mechanics and scattering theory, the one-dimensional step potential is an idealized system used to model incident, reflected and transmitted matter waves. The problem consists of solving the time-independent Schrödinger equation for a particle with a step-like potential in one dimension. Typically, the potential is modelled as a Heaviside step function. Calculation[edit] Schrödinger equation and potential function[edit] Scattering at a finite potential step of height V0, shown in green. The time-independent Schrödinger equation for the wave function is The barrier is positioned at x = 0, though any position x0 may be chosen without changing the results, simply by shifting position of the step by −x0. The first term in the Hamiltonian, is the kinetic energy of the particle. Solution[edit] The step divides space in two parts: x < 0 and x > 0. both of which have the same form as the De Broglie relation (in one dimension) Boundary conditions[edit] Transmission and reflection[edit]

From Eternity to Book Club: Chapter Twelve | Cosmic Variance Welcome to this week’s installment of the From Eternity to Here book club. Part Four opens with Chapter Twelve, “Black Holes: The Ends of Time.” Excerpt: Unlike boxes full of atoms, we can’t make black holes with the same size but different masses. The size of a black hole is characterized by the “Schwarzschild radius,” which is precisely proportional to its mass. If you know the mass, you know the size; contrariwise, if you have a box of fixed size, there is a maximum mass black hole you can possibly fit into it. It’s not surprising to find a chapter about black holes in a book that talks about relativity and cosmology and all that. Black holes are important to our story for a couple of reasons. The other reason black holes are important, of course, is that the answer that Bekenstein and Hawking derive is somewhat surprising, and ultimately game-changing.

Particle in a box In quantum mechanics, the particle in a box model (also known as the infinite potential well or the infinite square well) describes a particle free to move in a small space surrounded by impenetrable barriers. The model is mainly used as a hypothetical example to illustrate the differences between classical and quantum systems. In classical systems, for example a ball trapped inside a large box, the particle can move at any speed within the box and it is no more likely to be found at one position than another. However, when the well becomes very narrow (on the scale of a few nanometers), quantum effects become important. The particle may only occupy certain positive energy levels. Likewise, it can never have zero energy, meaning that the particle can never "sit still". The particle in a box model provides one of the very few problems in quantum mechanics which can be solved analytically, without approximations. One-dimensional solution[edit] where is the length of the box and is time. and