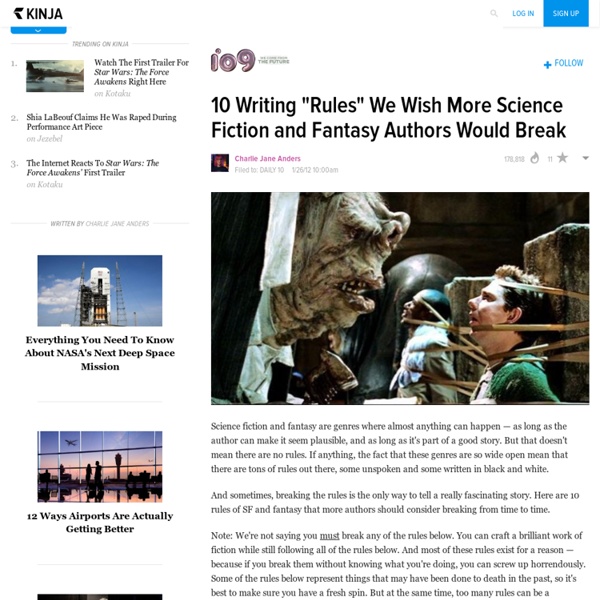 Kinja is in read-only mode. We are working to restore service. I give a hearty Here Here for #4! There is nothing wrong with telling a story that fits within the covers of a single book. Remember, the whole Trilogy+ got started when the publisher got fed up with the fact Tolkien wouldn't finish. The moment I see something like "Book One of the (insert name of place or magic item and latin number)ogy", I want to put the book down. Flagged

Carpe diem Translation[edit] Carpe is the second-person singular present active imperative of carpō, "pick or pluck," used by Ovid to mean "enjoy, seize, use, make use of".[1] Diem is the accusative case of the noun "dies", that means "day". A more literal translation of "Carpe diem" would thus be "enjoy the day" or "pluck the day [as it is ripe]"—i.e. to enjoy the moment; however, in its modern-day usage, the "diem" usually gets abstracted as "opportunity." History[edit] Source[edit] Carpe diem concept[edit] Perhaps the first written expression of the concept is the advice given by Siduri to Gilgamesh, telling him to forgo his mourning and embrace life although some scholars see it as simply urging Gilgamesh to abandon his mourning, "reversing the liminal rituals of mourning and returning to the normal and normative behaviors of Mesopotamian society Meaning[edit] Related expressions[edit] Hebrew[edit] The phrase ? Other Latin[edit] "Collige, virgo, rosas [...]" See also[edit] References[edit]

Aphorism An aphorism is an original thought, spoken or written in a laconic (concise) and memorable form.[1] Aphorism literally means a "distinction" or "definition". The term was first used in the Aphorisms of Hippocrates. The oft-cited first sentence of this work (see Ars longa, vita brevis) is: Life is short, art long, opportunity fleeting, experience deceptive, judgment difficult. The term was later applied to maxims of physical science, then statements of all kinds of philosophical, moral, or literary principles. Definition[edit] 1. a concise statement of a principle 2. a terse formulation of a truth or sentiment Literature[edit] Two influential collections of aphorisms published in the twentieth century were The Uncombed Thoughts by Stanislaw Jerzy Lec (in Polish), and Itch of Wisdom by Mikhail Turovsky (in Russian and English).[2] Society[edit] Misquoted or misadvised aphorisms are frequently used as a source of humour; for instance, wordplays of aphorisms appear in the works of P.

13 Passages from Children's Literature that are More Dreadful and Shocking Than They May First Appear | Lemony Snicket From time to time people say to me, "Lemony Snicket, you write dreadful and shocking books. What sort of writing do you find dreadful and shocking yourself?" My reply to them is always the same: "Please be quiet, I'm trying to read." Nevertheless, I occasionally stumble upon a dreadful and/or shocking passage of children's literature that may have passed unnoticed by other readers with less investigative or hysterical temperaments. I am grateful to the Huffington Post for allowing me to point out these disturbing passages so that the general public can be as flushed and sputtering as I am. 1. "What happens in the barnyard haunts the bedroom and the grave," said Freud, or maybe it was Old Macdonald. 2. Just when Ms. 3. A stern governess quits and the family descends into chaos. 4. 5. 6. 7. Just as a kidnapping automatically makes a book more interesting [editor's note: Mr. 8. What, pray tell, is Mr. 9. 10. 11. No, it certainly does not, your highness. 12. 13.

For all the imgurian writers out there, The wheel of emotions Stumbled across a disturbing message by my SO : sex History of the Salton Sea A disaster created the inland sea, Mother Nature brought her to her knees. CAN WE SAVE THE SALTON SEA? The Salton Sea region was part of the Gulf of California until about 4.4 million years ago. The Colorado River silt eventually blocked off the gulf and separated the region from the Pacific Ocean. Over the centuries at least 5 lakes occupied the basin where the current Salton Sea lies. The Salton Sea was created between 1905 and 1907 when the Colorado River broke through diversion canals in the irrigation system in Imperial County. Ancient Lake Cahuilla (pictured above) was much larger than the current sea. The water line of ancient Lake Cahuilla is still visible on the western shores of the Salton Sea near Travertine Point and in La Quinta. The New Liverpool Salt Works began operation in 1885, near the present day town of North Shore. Native Cahuilla Indians and local settlers worked the 1,000 acre mine. All buildings were underwater by 1906 as the basin flooded. Eilers Date Palm Beach

6 Sexist Video Game Problems Even Bigger Than the Breasts Some video games are more obviously focused on women's genitals than a gynecologist exam. In games like TERA, a woman's armor is a map of her erogenous zones, defending her from only the most technical definition of nudity. Dead or Alive uses more computer power to model Kasumi's breasts than NASA had for the moon landings. TecmoAnd the results deal with similar levels of gravitational attraction. But there are even more sexist structures in video games than the armor. Namco Bandai GamesOne self-exam and she'll explode. The physical character design can obviously be sexist -- in fact, that's usually its entire job -- but often it's the narrative structures that wrap the player in a matrix of sexism, and these are six of the most common. #6. Naughty Dog Some recent games have featured independent, well-developed characters with amazing powers, intriguing pasts, and mental off-switches activated by ball sweat. Naughty Dog"There there ... it's OK, Y chromosome is here." #5. Nintendo #4.

Sarcasm Sarcasm is "a sharp, bitter, or cutting expression or remark; a bitter gibe or taunt."[1][2] Sarcasm may employ ambivalence,[3] although sarcasm is not necessarily ironic.[4] "The distinctive quality of sarcasm is present in the spoken word and manifested chiefly by vocal inflections".[5] The sarcastic content of a statement will be dependent upon the context in which it appears.[6] Origin of the term The word comes from the Greek σαρκασμός (sarkasmos) which is taken from the word σαρκάζειν meaning "to tear flesh, bite the lip in rage, sneer".[1] It is first recorded in English in 1579, in an annotation to The Shepheardes Calender by Edmund Spenser: Tom piper, an ironicall Sarcasmus, spoken in derision of these rude wits, whych ...[1] However, the word sarcastic, meaning "Characterized by or involving sarcasm; given to the use of sarcasm; bitterly cutting or caustic", doesn't appear until 1695.[1] Usage In its entry on irony, Dictionary.com describes sarcasm thus: Understanding Vocal indication