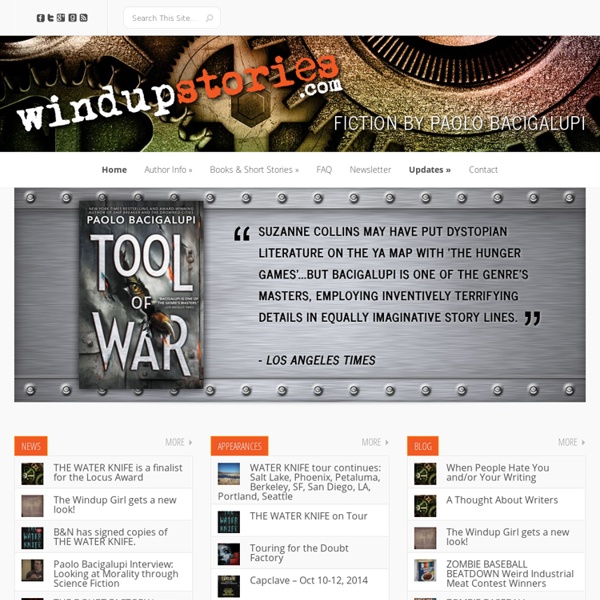 YA Author By Day... So I can’t believe I did it, but I did—I watched them all. Well, mostly. I only made it through part of Reign. 30-second reviews of the wildly entertaining and slightly overwhelming Thursday line-up. THE VAMPIRE DIARIES: So, we all agree that last week’s episode was ridiculous, yes? GREY’S ANATOMY: This was mostly a relationship/sexy times episode with a sad cancer story worked in. PARENTHOOD: OMG, Parenthood, I just love. GRADE: A (because Parenthood rules) SCANDAL: (Are you dying yet? Oh, Scandal.

Stories Soft Apocalypse by Will McIntosh I passed a lithe cormorant of a woman trying on gas masks at a street kiosk. She was gazing intently into a little round mirror mounted on a telephone pole, wearing a cute round avocado-colored mask. I loved the way she moved, loved her librarian glasses and her buzz-cut. The lanky beauty left my field of vision. Not that I'd ever approach a woman on the street; I hated guys who did that. And like a line of song stuck in my head, I thought of Deirdre, who had last ignited that flame, and felt a familiar stab of guilt. What had she done with my photos? There had been no cut-up pile greeting me in the doorway the day I broke up with her. I missed them to my bones. I slowed as I passed Jittery Joe's Coffee, hoping against hope to score a cup. I spied a sexy pair of legs in the crowd, strutting my way. A busty black woman with dreadlocks and tribal scarring hurried past. There was a bamboo outbreak on thirty-ninth street. The asphalt cracked and popped. “ID?”

The Dangerous Days of Daniel X - James Patterson Fiction/General Hardcover ISBN: 0316002925 $19.99/U.S. 272 pages 8 1/2 x 9 4/5 Little, Brown And Company Paperback (mass market) ISBN: 0316002933 $7.99/U.S. 288 pages 7 1/2 x 5 1/4 Little, Brown Young Readers HE WAS BORN WITH GREAT POWER The greatest superpower of all isn't to be part spider, part man, or to cast magic spells–the greatest power is the power to create. Daniel X has that power. AND A DEADLY SECRET Daniel's secret abilities–like being able to manipulate objects and animals with his mind or to re-create himself in any shape he chooses–have helped him survive. NOW THE FATE OF THE WORLD RESTS ON DANIEL X From the day that his parents were brutally murdered before his very eyes, Daniel has used his unique gifts to hunt down their assassin. Now, on his own, he vows to carry out his father's mission–and to take vengeance in the process. True Confessions My name is Daniel, and this is the first volume of my life story, which, hopefully, will be a very long and distinguished one. 1.

Swati Avasthi: Writer Satori in the Dust Bowl: A Review of Seed by Rob Ziegler About a century from now, climate change has caused a new Dust Bowl in the Corn Belt, resulting in major famine across the United States. Most of the surviving population leads a nomadic existence, migrating across the ravaged landscape in search of habitable, arable land. Decades of war, resource depletion and population decline have left the government practically powerless. Gangs and warlords rule the land. The only thing staving off full-blown starvation is Satori, a hive-like living city that produces genetically engineered drought-tolerant seed. Seed follows three separate but connected plots. What’s interesting about Seed are the huge differences in tone between the three plots. The way Rob Ziegler manages to weave these three highly disparate stories into one cohesive narrative is impressive. The resulting novel is a real page-turner filled with interesting characters and pulse-raising action scenes.

Jandy Nelson Southern Enlightenment With healthy doses of Axl Rose and methamphetamines, two new collections, from journalist John Jeremiah Sullivan and crime fiction writer Frank Bill, call forth the power of place and personal history in the Shallow South. Axl Rose makes it out, escapes. He spends his youth stealing televisions, brawling and losing fistfights, assaulting the occasional neighborhood mom. Then—fiery red mane presumably flowing behind him—he boogies. “Kiss my ass, Lafayette,” he’s rumored to spray paint on the street the night he flees his hometown for good. Twenty years after Ax takes flight, journalist John Jeremiah Sullivan— JJS to his growing legion of adoring fans—spends a few days poking around the Hoosier State, digging up old police reports and childhood friends. An inane lede, perhaps, from any other GQ writer, parachuting in from New York, surveying the bad and worst of the local color, and then beating hell back to Brooklyn. Not everyone makes it out, of course.