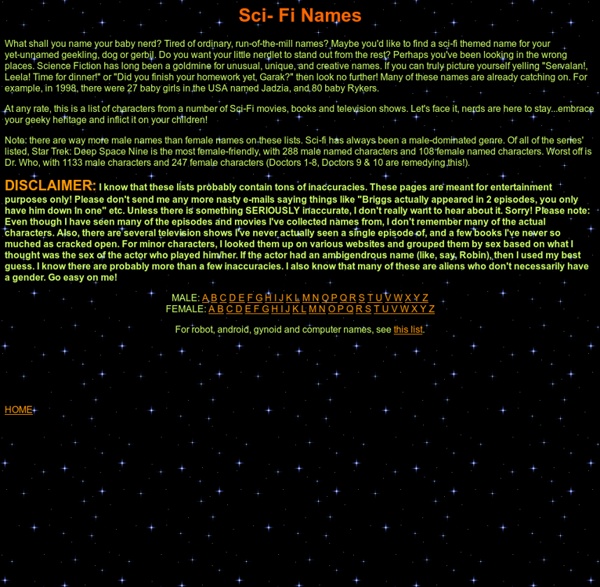 What shall you name your baby nerd? Tired of ordinary, run-of-the-mill names? Maybe you'd like to find a sci-fi themed name for your yet-unnamed geekling, dog or gerbil. Do you want your little nerdlet to stand out from the rest? At any rate, this is a list of characters from a number of Sci-Fi movies, books and television shows. Note: there are way more male names than female names on these lists. DISCLAIMER: I know that these lists probably contain tons of inaccuracies. For robot, android, gynoid and computer names, see this list.

Medieval Names - List of Medieval Names How to Plot a Character Driven Book in 3 Easy Steps | Historical Romance Author Robyn DeHart, Legend Hunters , Ladies Amateur Sleuth Society Theme & Premise: Or How to Plot a Character Driven Book in 3 Easy Steps It is said that there are two types of writers: plotters and seat of the pants writers (or fly into the mist writers). Obviously the majority of us fall somewhere in between. Step 1 – THEME. To define your theme, you need to know what theme is, so what is theme? But how do you come up with a theme out of thin air, especially if you’re doing this with a book you haven’t even written yet? So now you have your theme, let’s move on to Step 2 – PREMISE/CHARACTER LESSON. This is the biggie for me when I’m doing my prewriting. Character lesson or premise is just what it sounds like: what does your character need to learn? Which brings me right into Step 3 – CHARACTER ARC. Now comes the plotting. So you have a character who is at Point A (believing her past dictates her future) and needs to get to Point B (accepting her past and allowing herself a future). That’s it. Let’s face it, writing will never be easy. Share this page

Seven Keys To Unforgettable Characters | Bob Mayer's Blog Think of your favorite book. What the first thing that comes to mind when you bring it up in your brain? I’m willing to bet, it’s the characters. Most people relate to people, not things. Characters bring emotion to story, and emotion is what attaches readers to books. It took me a while to truly appreciate this fundamental truth of fiction. Here are some of the key lessons I’ve learned about character development over the years, which I’ll be covering in more detail next month in the Write It Forward on-line class on character: 1. 2. 3. What do you want? 4. What do you want? 5. Archetypes. 6. 7. These are just a few of the lessons I’ve learned about character over the years. Write It Forward! Like this: Like Loading... West Point Graduate, former Green Beret and NY Times bestselling author Bob Mayer has had over 50 books published.

10 Days of Character Building: A Day in the Life This is Day 2 of 10 Days of Character Building The day in the life approach to developing a character is focused on describing a normal day in the character’s life before something important happens to change it. Most central characters begin a story in their normal world. At some point, an event happens that takes them out of their normal world and sends them on whatever journey the story has in store for them. The beauty of analyzing a character’s day is that there are always opportunities to delve as deeply into their actions as you want. As you assemble a person’s day you get a good idea of their traits and flaws. When approaching the daily routine, you can go a number of ways. Top Questions for Fictional Characters -- Questions to Help in Creating Characters Creating the more complex round characters takes time -- time spent thinking about how your characters look, where they're from, and what motivates them, for instance. The questions below provide structure to this all-important thought process. While the reader will not need to know all the details, it's important that you do. The better you know your characters, the more realistic your story or novel will end up being. 1. Michael Adams ("Anniversaries in the Blood"), the novelist and writing professor, believes that setting is the most important element of any story. 2. In a similar vein, where did your character's life begin? 3. Though this might seem like an obvious question, it's important to make a clear decision about this before you begin writing -- otherwise, it's impossible to get the details right. 4. Would a rose by any other name smell as sweet? 5. 6. As with real people, many things about your character's personality will be determined by his background. 7. 8. 9. 10.

Writing Prompt: Get Into Character « Novel Novice Welcome to Novel Novice’s Writing Prompts! Reading and writing go hand-in-hand: reading makes you a better writer, and writing makes you a better reader. Whether you’re aspiring to be a novelist, just having fun, or interested in trying your hand at writing, we welcome you to join in. Here’s how it will work: Prompts will be posted on the 1st of the month, every other month, Feb-Oct.Stories will be due 6 weeks later, on the 14th of the following month.Stories will be posted on the website for everyone to read, so that we can learn from each other.Each prompt will focus on a writing technique to help you sharpen your skills.Prompts are open-ended so that they may be used for fan fiction for any book/series. There is no judging, voting, or winners. To have funTo improve your writing skillsTo share your writing with others On to this month’s prompt…. The Focus: Ahhh…the age-old writing debate — what’s more important: characters or plot? Voice Every character has a distinct “voice”. World View

Writing Realistic Injuries Quick Contents Introduction General remarks What's normal?Reactions to injury - including emotional reactions, fainting and shock. Minor injuries - such as bruises, grazes and sprains Head injuries - from black eyes to severe concussions Broken bones Dislocated jointsCutting and Piercing - for various locations, including blood loss symptoms and figures. Blunt trauma - getting hit, internal injuries.Burns - including electrical burns Hostile environments - such as extreme cold and heat, oxygen deprivation and exposure to vacuum. Introduction Characters climbing cliffs with broken arms or getting knocked out for an hour or so and then running around like nothing happened, bug me. Back to Quick Contents General Remarks There’s a lot of ‘relatively’ and ‘probably’ in this article because everyone reacts differently to injury. What’s Normal…? For a normal, reasonably healthy adult the following reading are ‘normal’. Pulse rate between 60-100 beats per minute. Blood pressure 120-140 over 70-90.