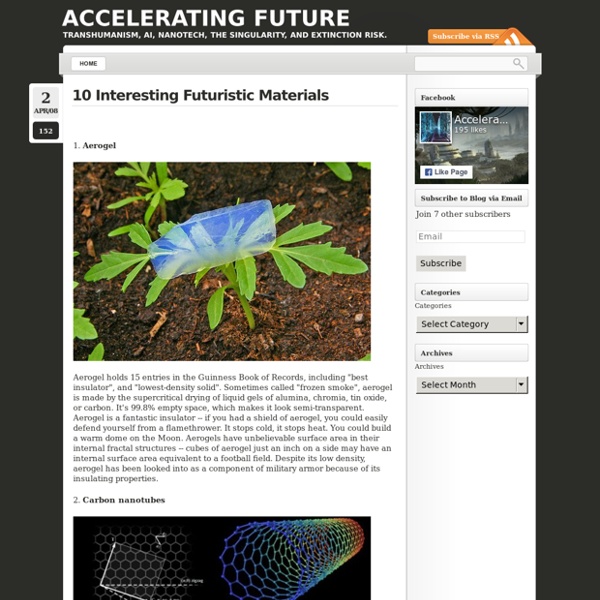 1. Aerogel Aerogel holds 15 entries in the Guinness Book of Records, including "best insulator", and "lowest-density solid". Sometimes called "frozen smoke", aerogel is made by the supercritical drying of liquid gels of alumina, chromia, tin oxide, or carbon. 2. Carbon nanotubes are chains of carbon held together by the strongest bond in all chemistry, the sacred sp2 bond, even stronger than the sp3 bonds that hold together diamond. 3. "Metamaterial" refers to any material that gains its properties from its microscopic structure rather than bulk composition. 4. We're starting to lay down thick layers of diamond in CVD machines, hinting towards a future of bulk diamond machinery. 5. Diamonds may be strong, but aggregated diamond nanorods (ADNRs) are stronger. 6. Amorphous metals, also called metallic glasses, consist of metal with a disordered atomic structure. 7. A superalloy is a generic term for a metal that can operate at very high temperatures, up to about 2000 °F (1100 °C). 8. 9. Related:  Futur

10 Futuristic Materials Lifeboat Foundation Safeguarding Humanity Skip to content Switch to White Special Report 10 Futuristic Materials by Lifeboat Foundation Scientific Advisory Board member Michael Anissimov. 1. Aerogel protecting crayons from a blowtorch. This tiny block of transparent aerogel is supporting a brick weighing 2.5 kg. Aerogel holds 15 entries in the Guinness Book of Records, more than any other material. Carbon nanotubes are long chains of carbon held together by the strongest bond in all chemistry, the sacred sp2 bond, even stronger than the sp3 bonds that hold together diamond. “Metamaterial” refers to any material that gains its properties from structure rather than composition. We’re starting to lay down thick layers of diamond in CVD machines, hinting towards a future of bulk diamond machinery. Diamonds may be strong, but aggregated diamond nanorods (what I call amorphous fullerene) are stronger. Transparent alumina is three times stronger than steel and transparent. inShare28 Materials

14 Wild Ideas Many Worlds , Medicine Useless , A.I. via Common Sense , Cryonics , Uploads , I'm in Sim , Fast Growth , Growth Stops , Colonize Galaxy , No Aliens , Aliens Came & Left , Private Law , Futarchy , No One Honest . by Robin Hanson , Oct. 18, 2001 A wild idea is one that many people think is obviously quite unlikely. I'd say at least a third of these wild ideas are likely true. (Parenthetic links are to more of my writings .) Many times each day, your mind permanently splits into different versions that live in different worlds.

27 Science Fictions That Became Science Facts In 2012 We may never have our flying cars, but the future is here. From creating fully functioning artificial leaves to hacking the human brain, science made a lot of breakthroughs this year. 1. Quadriplegic Uses Her Mind to Control Her Robotic Arm At the University of Pittsburgh, the neurobiology department worked with 52-year-old Jan Scheuermann over the course of 13 weeks to create a robotic arm controlled only by the power of Scheuermann’s mind. 2. Once the robot figures out how to do that without all the wires, humanity is doomed. 3. Photo Courtesy of Indigo Moon Yarns. At the University of Wyoming, scientists modified a group of silkworms to produce silk that is, weight for weight, stronger than steel. 4. Using an electron microscope, Enzo di Fabrizio and his team at the Italian Institute of Technology in Genoa snapped the first photos of the famous double helix.Source: newscientist.com / via: davi296 5. 6. ReCell by Avita Medical is a medical breakthrough for severe-burn victims. 7. 8. 10.

Don Harper Mills: 1994's Most Bizarre Suicide This story can be found in many places on the Web, usually without attribution, and claims that it is true. But the story of its origin, and how to spot it must be an UL, can be found at Deconstructing Ronald Opus At the 1994 annual awards dinner given by the American Association for Forensic Sciences, AAFS President Don Harper Mills astounded his audience in San Diego with the legal complications of a bizarre death. On March 23 the medical examiner viewed the body of Ronald Opus and concluded that he died from a gunshot wound of the head caused by a shotgun. Ordinarily a person who starts into motion the events with a suicide intent ultimately commits suicide even though the mechanism might be not what he intended. Further investigation led to the discovery that the room on the 9th floor from whence the shotgun blast emanated was occupied by an elderly man and his wife. When one intends to kill subject A, but kills subject B in the attempt, one is guilty of the murder of subject B.

meganmay personal cargo Originally published on Omni Reboot The human brain has spawned a parallel universe of imagined lifeforms, landforms, and civilizations. Though usually conceived of as fiction, this parallel universe often leaks into various Earth systems. Robot explorers, genetically engineered animals, artificial intelligence, international space stations–these are, before anything else, the products of our imagination. They are what happens when an organism is capable of asking itself: What does the future look like? The Biosphere 2 in Tucson, Arizona is a totemic example of how such fantasies can carry over into reality. Every structure on the compound is beautifully and precisely engineered, despite having come into existence in a mere three years. According to John P. In September 1991, a crew of eight researchers entered the Biosphere 2 for its first mission in contained survival. This is where our unique ability to imagine the future may prove to be our biggest asset.

64 Things Every Geek Should Know - laptoplogic.com The term ‘geek’, once used to label a circus freak, has morphed in meaning over the years. What was once an unusual profession transferred into a word indicating social awkwardness. As time has gone on, the word has yet again morphed to indicate a new type of individual: someone who is obsessive over one (or more) particular subjects, whether it be science, photography, electronics, computers, media, or any other field. A geek is one who isn’t satisfied knowing only the surface facts, but instead has a visceral desire to learn everything possible about a particular subject. A techie geek is usually one who knows a little about everything, and is thus the person family and friends turn to whenever they have a question. If you’re that type of person and are looking for a few extra skills to pick up, or if you’re a newbie aiming to get a handhold on the honor that is geekhood, read on to find out what skills you need to know. 1. USB – Universal Serial Bus GPU – Graphics Processing Unit 2. 3.

NASA OKs Feb. launch of private space station trip CAPE CANAVERAL, Fla. (AP) — A private California company will attempt the first-ever commercial cargo run to the International Space Station in February. NASA announced the news Friday, one year and one day after Space Exploration Technologies Corp., or SpaceX, became the first private business to launch a capsule into orbit and return it safely to Earth. On Feb. 7, SpaceX will attempt another orbital flight from Cape Canaveral Air Force Station. This time, the unmanned Dragon capsule will fly to the space station and dock with a load of supplies. NASA stressed it is a target date. "Pending all the final safety reviews and testing, SpaceX will send its Dragon spacecraft to rendezvous with the International Space Station in less than two months," said NASA's No. 2, deputy administrator Lori Garver. NASA has turned to industry to help stock the space station now that the space shuttles are retired, investing hundreds of millions of dollars in this startup effort. Online: SpaceXNASA