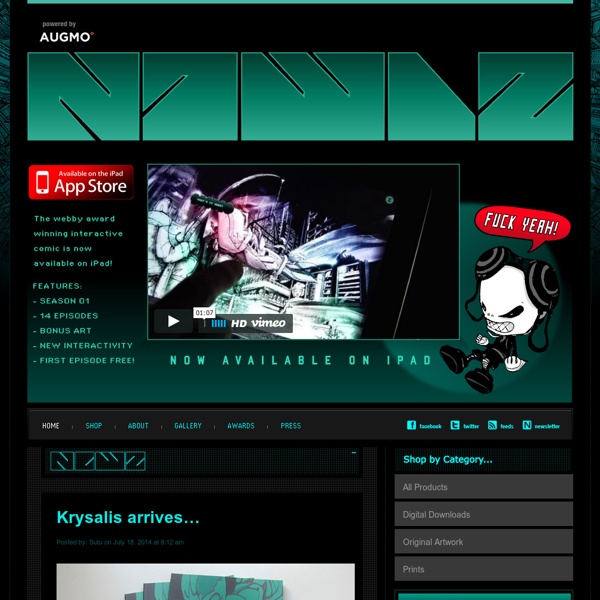 Year in review Posted by: Sutu on December 31. 2013 at 11:14 am Yes it’s New Year’s eve, the end of 2013. Is everybody ready? I wish you all well, may the madness bring new and exciting visions! I know I haven’t been too active on the blog, but never the less it’s been quite a big year with even bigger things happening in the New Year.

Butterfly Butterfly at 5 Minute Marvels! September 28th, 2011 Check out this new Butterfly fan art from my pals over at 5 Minute Marvels! Thanks, Grace and Tim! Flutterfield Todd Allison & the Petunia Violet Manga RELEASED:Apr 19, 2011 LAST UPDATED:Apr 19, 2011 BLANKS STATUS:Missing (28 of 28) Webcomics My first webcomic launched with this site in 1998. From 1998 to 2004, I regularly posted new comics in various experimental formats, occasionally getting into long online debates about whether this-or-that format was a step toward the future of comics or just a gimmicky dead-end. Most of the comics in this section play with the idea of treating the screen as a window rather than a page (the so-called "infinite canvas" style, most often associated with my book Reinventing Comics).

Create a new strip You are using an ancient web browser, Stripgenerator does not work properly in it.Get rid of Internet Explorer 6! Upgrade to a new version or use another browser like Chrome, Opera, Safari or Firefox. StripGenerator Say hello to manoli_martin 384,965 Members 966,002 Strips SORE THUMBS by Owen Gieni and Chris Crosby ABOUT SORE THUMBS (courtesy of Comixpedia) Sore Thumbs is a manga-style webcomic drawn by Owen Gieni and written by Chris Crosby, which started on March 8, 2004. It is more or less an allegory of the current political landscape in America. Sore Thumbs mainly centres on the trials of Fairbanks Greensworthington and his sister Cecania. The focus of the comic is the Sore Thumbs Video games store, which Fairbanks owns; Cecania, Harmony and Sawyer are employees there. The strip frequently makes use of bizarre and incongruous similes and metaphors, and there is a running gag wherein Mario (the Nintendo character) is supposed to look like a penis.

K.G.B. May 5th, 2010 ♥ by: Hwan Another week, another K.G.B.! Can you believe we are already at the end of Chapter 4!?! Next week will be the last chapter for the first season so BRACE YOURSELF! Korean! -Last panel: 나중에 보자. Moon Town - Through all the changes at Moon Town, and now back to its roots as The Adventures of Ace Tripwire, Moon Town has enjoyed a great, loyal fan-base. In my haste to put out the best comic I can, I have been guilty of accidentally disregarding these lovely fans, even to the point of recently deleting the archive to start over. It’s time for Ace Tripwire to become what I meant it to be all those years ago, but there’s no reason to turn my back on Simon Tripline, Cassie, Flagg, Jimmy, Vin and all the aliens we came to love in Moon Town. In honor of you, the hard core fan, I am putting the archives of that strip , even as I shut down Moon-Town.com. This archive is rebuilding.

Comics - Announcing Hiatus. 26 Jan 2012 11:00 am Average Rating: Rate this Comic: SpoonFace , 26 Jan 2012 09:43 am Reply Hypercomics A hypercomic can be thought of as a webcomic with a multi-cursal narrative structure. In a hypercomic the choices made by the reader may influence the sequence of events, the outcome of events or the point of view through which events are seen. Animation, sound and flashy transitions are really just the frills – it’s that element of reader choice and interaction that makes a hypercomic a hypercomic. Icarus Needs – 10/07/2013 At long last it’s the return of everyone’s favourite mentally unhinged cartoonist, Icarus Creeps.

Decrypting Rita - Sorry this is getting a little depressing; there will be more action soon! As an experiment I also put all the pages to date into a very very wide image. This is sort of its native format and sort of not. I don’t think it quite works like that but it’s an interesting failure; one of these days I kinda want to do a comic that does work like that. MS Paint Adventures introdoucing, 20104............ the NEWD YEAR Gigapause status: STILL GIGAPAUSED. It's almost over, right? Um, no, sorry. I still have no time estimate, or specific date I am shooting for. 4/13 would be the COOLEST date to shoot for, right? I doubt that's realistic though. Hyperfiction A Final Dream of Clocks – 25/5/2001 I resolved to rid myself of all the ideas clogging up my notebook. Here for your enjoyment is the resulting story of twelve parts and infinite paths. Much thanks to Future Wave Shaper for the loops. Wrong Planet – 7/3/2001

Lovelace– The Origin This brief biographical sketch was done for Ada Lovelace Day 2009. I think I in was a pub at the time. From a humble beginning as a joke in a pub, The Thrilling Adventures of Lovelace and Babbage is now an Eisner-nominated graphic novel! New York Times Bestseller and winner of the British Society for the History of Mathematics Neumann Prize! Frank Delbruck Recommends… Hypercomics.net was founded to propagate and promote the idea of web-based comics experimentation. Usually this experimentation takes the form of what we call “hypercomics” We define a hypercomic as anything that shares the characteristics of comics form but include features that are not directly reproducible in a print format. Hypercomics may include sounds, animation, non linear navigation, etc. Generally, hypercomics are native to the web.