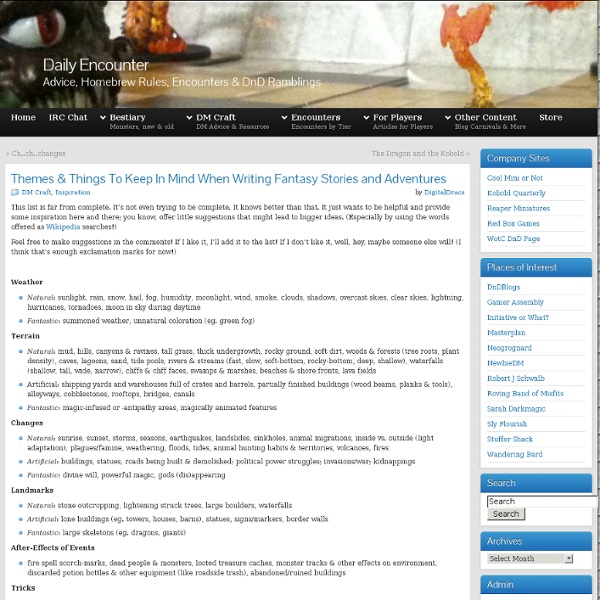 Creative Writing For Dummies Cheat Sheet Rewriting and editing helps to tighten up your work. But it can be difficult – what to chop and when to stop may not be clear, and you may change your mind more than once during the process. Ask yourself whether you need to take out: Unnecessary information and explanation. Passages of dialogue that go on too long. 10 Steps to Creating Realistic Fantasy Animals by Ashley Lange Why do writers write? Because it isn't there. Thoughtful Thursday: Tad Williams talks about world-building (and gives away a book) I’m reading two of Tad Williams‘s books right now, and enjoying both very much. The first is The War of the Flowers, a one-volume epic fantasy with marvelous imagery and an appealing protagonist, just the sort of thing we’ve come to know and love from this author. The other is The Dirty Streets of Heaven, the first in Williams’s urban fantasy series starring Bobby Dollar, an angel who gets caught up in a battle between good and evil without knowing what the heck is going on. It reminds me of Dashiell Hammett, only with heavenly choirs and dastardly demons; there’s even a drop-dead gorgeous blonde. Tad’s dropped by to tell us a bit about how he approaches world-building.

3 1/2 Tips for Fixing an Unlikable Character I’ve mentioned several times that I struggle with writing unlikable characters when I first draft a story, and I know I’m not the only one. We often love our characters no matter what they do—even the villains. *smile* So we’re not unbiased readers when it comes to figuring out whether our characters are too unlikable. In any story, it’s difficult to balance not enough and too much of various elements. Not enough description can leave our readers confused about the setting or action details, while too much description can slow our story’s pace. Same with theme building, subplots, action beats, etc. English 50 Exercises for Story Writers English 50 – Intro to Creative Writing: Exercises for Story Writers Basic Theory: What is a short story? As soon as someone delivers a definition, some good writer will write a story that proves the theory wrong. About the only thing we can say for sure is that short stories are short and that they are written in what we call prose.

Magical World Builder By, Stephanie Cottrell Bryant The Magical World Builder's Guide is a tool for creating a fantasy universe. Although there are several good guidebooks to creating a science fiction world, few deal with the quintessential elements of a fantasy realm. This guide ambitiously attempts to help fantasy authors discover their realms long before they sit down to the keyboard and fill in the details. In addition, I've written a much-beloved 30 Days of World Building tutorial designed to help you hit the ground running with your world building in just a few minutes a day.

How to Make a Fantasy World Map Any good fantasy world deserves a map, but how does a world map go from your notebook to an espansive illustration that provides depth and information? Read on as Isaac Stewart shares his process for making the map for The Emperor’s Blades, the first book in Brian Staveley’s new fantasy series Chronicles of the Unhewn Throne. The book is out on January 14th but you can read the first seven chapters for FREE right here. Writing a Book – Finding Time You want to write a book, and have been wondering about the process. Maybe you’ve started a bunch of times, but something got in the way. Motivation failed you, or you lost track of the time, or you wrote the entire thing but never got it out there in any form or fashion. There are lots of roadblocks and dead ends in the world of writing books. Finding Time to Write a Book Most people, when I queried them, said that finding time was the #1 complain/worry/issue they had with being able to write a book.

How a Scene List Can Change Your Novel-Writing Life By the end of this post you will have a nagging urge to use an excel spreadsheet. Don’t make that face—I know you’re a writer and not a data analyst. Or if you are a data analyst—I get that you’re on this blog to get away from your day job. But guess what? Creating Fantasy Nations (World Building II) By this point you've got your map and the basics for one of your ideas. It's time to put people on these continents. If you haven't already, ask yourself the basics about each culture you want to generate.

How Much of My World Do I Build? First, let me say that worldbuilding is an essential skill for every writer, regardless of genre. Not all writers need to concentrate on all areas of worldbuilding, but every writer must do some worldbuilding if he hopes to have a novel that is coherent, consistent, and real. Second, writers seem to come in three varieties — those who really have no idea what worldbuilding is or why they should bother with it; those who do know, but figure they’ll wing the details as they go; and those obsessive folks who secretly believe that they really can’t start the book until the whole planet is in place. I’ve spent time in all three camps — most of my time in the last one. The system works. Writing a Novel – What You Need To Know Welcome to the world of the author. It’s a magical world of puppies and kitties and other creatures with eyes that’ll give you nightmares for years to come. I know they give me nightmares. In any case, you’re likely on this site reading this because you have a story in your head that you want to share with the world.

Brandon Sanderson: Sanderson's First Law Introduction I like magic systems. That’s probably evident to those of you who have read my work. A solid, interesting and innovative system of magic in a book is something that really appeals to me. True, characters are what make a story narratively powerful—but magic is a large part of what makes the fantasy genre distinctive.