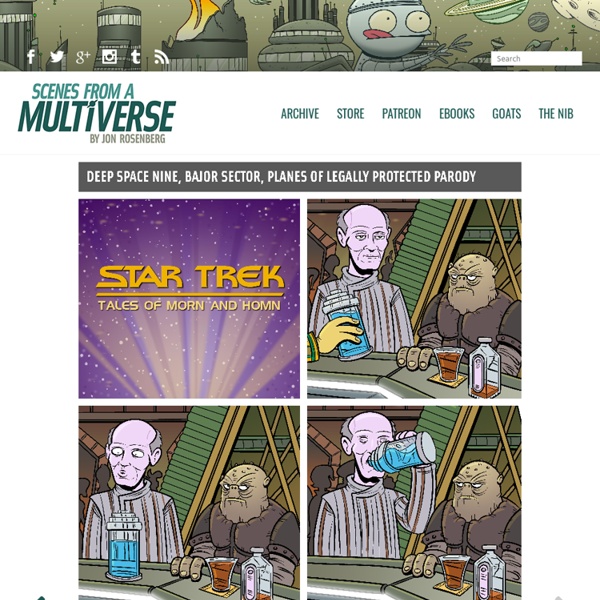 Theists often ask atheists what sort of evidence they would accept as proof that God exists. I think if all religious folks lived up to their own deeply held values, that would be a true miracle. But there’s little risk of that. Personally, if I believed that an omniscient, omnipotent and potentially cranky deity was keeping tabs on me all the time, I’d be a lot better behaved. How can a theist expect me to believe in a God when virtually none of them are capable of living as though there was one?

Moon Town - Through all the changes at Moon Town, and now back to its roots as The Adventures of Ace Tripwire, Moon Town has enjoyed a great, loyal fan-base. In my haste to put out the best comic I can, I have been guilty of accidentally disregarding these lovely fans, even to the point of recently deleting the archive to start over. It’s time for Ace Tripwire to become what I meant it to be all those years ago, but there’s no reason to turn my back on Simon Tripline, Cassie, Flagg, Jimmy, Vin and all the aliens we came to love in Moon Town. In honor of you, the hard core fan, I am putting the archives of that strip , even as I shut down Moon-Town.com. This archive is rebuilding. I have all the pages uploaded, and they will trigger at the rate of a page a week.

Cleopatra in Spaaace! I’ve been so busy with Cleo 2 that I’ve failed to mention I’ll be at this year’s MegaCon in Orlando, FL. You’ll be able to find in the same spot I’ve been at in the however many years I’ve been attending this show: Artist Alley, table white 7. Here’s a map: CiS: Target Practice unfortunately won’t be out for another month, but if you stop by I may be able to give you a sneak preview of it.

SUBNORMALITY! All content copyright Winston Rowntree, 2015. Museum previously seen here and then here. Unsounded AboutComicWorldMiscellanyShop Chapter 12: The Collar of Kasslyne In Which The Question Itself Is Called Into Question Chapter 11: Only A Cause Darths & Droids SORE THUMBS by Owen Gieni and Chris Crosby ABOUT SORE THUMBS (courtesy of Comixpedia) Sore Thumbs is a manga-style webcomic drawn by Owen Gieni and written by Chris Crosby, which started on March 8, 2004. It is more or less an allegory of the current political landscape in America. Butterfly Butterfly at 5 Minute Marvels! September 28th, 2011 Check out this new Butterfly fan art from my pals over at 5 Minute Marvels! Thanks, Grace and Tim! Flutterfield September 13th, 2011

Dragon Heroes - Online comic As a kid I wanted to achieve my dream to write, illustrate and publish a book to show people that with hard work anything is possible. I believe that everybody has some kind of dream and seeing that someone else achieving their dream would give them hope. I have now published two books and Dragon Heroes were one of my other projects with this purpose. If the projects I have done have given hope to at least one person, that would be enough. I'm a university student in my twenties now and I feel that I should leave this task to younger ones. Decrypting Rita - Sorry this is getting a little depressing; there will be more action soon! As an experiment I also put all the pages to date into a very very wide image. This is sort of its native format and sort of not. I don’t think it quite works like that but it’s an interesting failure; one of these days I kinda want to do a comic that does work like that. (Maybe even one that’s one huge continuous image with panel borders over it.

Lovelace– The Origin This brief biographical sketch was done for Ada Lovelace Day 2009. I think I in was a pub at the time. From a humble beginning as a joke in a pub, The Thrilling Adventures of Lovelace and Babbage is now an Eisner-nominated graphic novel! New York Times Bestseller and winner of the British Society for the History of Mathematics Neumann Prize! For more on Ada Lovelace not in the form of a comic book, an excellent in-depth summation of Lovelace and Babbage’s work can be found at Steven Wolfram’s blog.