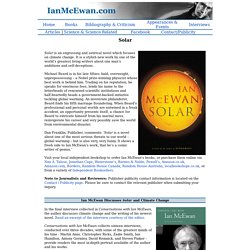 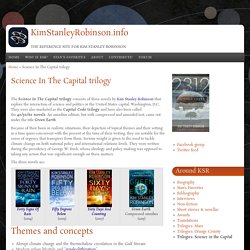 They were also marketed as the Capital Code trilogy and have also been called the 40/50/60 novels. An omnibus edition, but with compressed and amended text, came out under the title Green Earth. Because of their basis in realistic situations, their depiction of topical themes and their setting in a time quasi-concurrent with the present at the time of their writing, they are notable for the sense of urgency that transpires from them. Serious weight is given to the need to tackle climate change on both national policy and international relations levels. They were written during the presidency of George W. The three novels are: (to develop) Main page: List of Science In The Capital trilogy characters Main page: Places in the Science In The Capital trilogy. 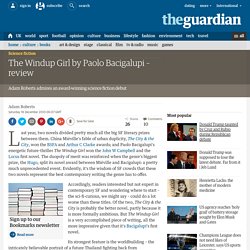 China Miéville's fable of urban duplicity, The City & the City, won the BSFA and Arthur C Clarke awards; and Paolo Bacigalupi's energetic future-thriller The Windup Girl won the John W Campbell and the Locus first novel. The duopoly of merit was reinforced when the genre's biggest prize, the Hugo, split its novel award between Miéville and Bacigalupi: a pretty much unprecedented event. Evidently, it's the wisdom of SF crowds that these two novels represent the best contemporary writing the genre has to offer. Accordingly, readers interested but not expert in contemporary SF and wondering where to start – the sci-fi-curious, we might say – could do a lot worse than these titles.

Of the two, The City & the City is probably the better novel, partly because it is more formally ambitious. The Windup Girl has been compared to William Gibson's seminal cyberpunk novel Neuromancer, and it's easy to see why. VersoBooks.com. Andreas Malm: Our Fight for Survival In this article, originally published on the Jacobin website, Andreas Malm (author of Fossil Capital: The Rise of Steam Power and the Roots of Global Warming) argues that ahead of COP21, and with Hollande's clampdown on protests around Paris in the weeks of the conference, that confronting climate change through militant resistence in the streets is more important than ever. 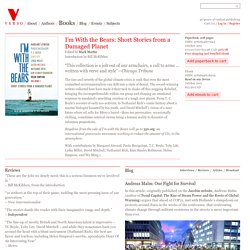 The climate negotiations entered their final day, and we geared up for our most audacious action. Several buses brought four hundred activists to different locations near the conference hall. Adrenaline running, we walked fast toward the gates and the guards. After a week of discussing sea level rise, eating vegan food, blocking car traffic, and marching in the streets dressed as polar bears and turtles, we were out to make a real difference.Continue Reading By John Merrick / 01 December 2015 Jason W. 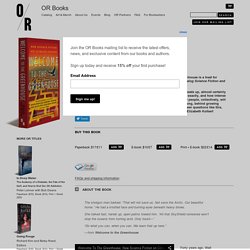 —Analog Science Fiction and Fact "[T]here is a lot about global warming that we don't know. FAQs and shipping information About the Book The shotgun man barked, “That will not save us. Forty years ago, Walt Kelly’s comic strip character Pogo famously intoned: “We have met the enemy, and he is us.” What will our new world look like? Included is new work by Brian W.