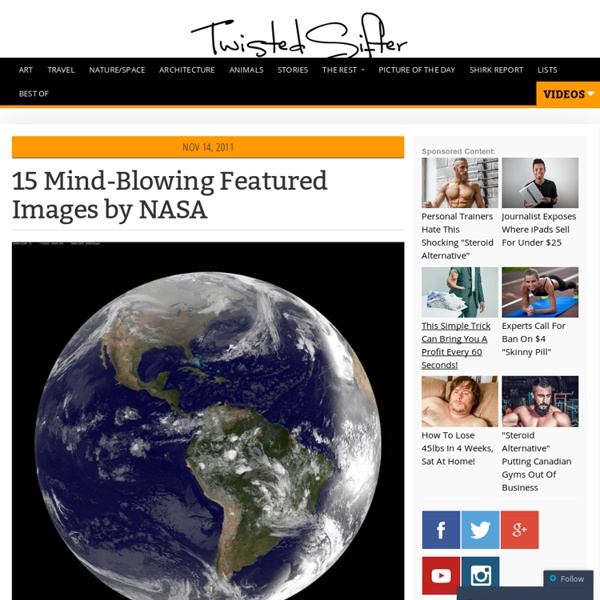 The NASA Goddard Space Flight Center is home to the United States’ largest organization of combined scientists, engineers and technologists that build spacecraft, instruments and new technology to study the Earth, the sun, our solar system, and the universe. They are also home to some of the most amazing images, visualizations and videos NASA has to offer! Please do yourself a favour and check out their incredible Flickr page which has thousands of images with wonderfully detailed descriptions. Below is a collection of 15 mind-blowing featured images from NASA. 1. The STEREO (Ahead) spacecraft caught this spectacular eruptive prominence in extreme UV light as it blasted away from the Sun (Apr. 12-13, 2010). 2. This is a mosaic image, one of the largest ever taken by NASA’s Hubble Space Telescope of the Crab Nebula, a six-light-year-wide expanding remnant of a star’s supernova explosion. The orange filaments are the tattered remains of the star and consist mostly of hydrogen. 3. 4. 5. 6.

Seriously jaw-dropping picture of the Sun Need your slice of awesome today? Then check out this truly astonishing picture of a detached prominence off the limb of the Sun: Holy wow! Click to ensolarnate. This picture was taken by Alan Friedman, who is no stranger to this blog: his picture of the boiling Sun last year was hugely popular, and so amazing I featured it as one of my top pictures of 2010. And with this he’s done it again… and maybe even topped it. Alan used a filter that lets through only a very narrow wavelength of light emitted by hydrogen (called Hα for those of you keeping track at home), so this tracks the activity of gas on the solar surface. The scene-stealer is that detached prominence off to the left. The beauty of this picture belies its violence and sheer magnitude: the mass of material in a prominence can easily top 10 billion tons! Yegads. Making this even more amazing, these images are taken with a 90mm telescope — that’s a lens not even 4 inches across! Related posts:

Icon Drawer - Free & Stock Icons Corsequoy Incredible Space Pics from ISS by NASA astronaut Wheelock Go Discovery! It was October 23, 2007 at 11:40am EST when I had my first ride to space on Discovery. She’s beautiful… just sad that this will be her last voyage. On September 22, 2010, with the departure of the Expedition 23 crew, Colonel Douglas H. We thought that we should put some of the space photos together as a tribute to him and the whole ISS crew. The following space photos are all visible on Astro_Wheels’ twitpic account, and we are eternally grateful to him for sharing these space photos with the world. Incredible Photos from Space: ‘Earthshine’… The Space Station basking in blue Earthshine as the rising sun pierces our razor-thin atmosphere to cover the Space Station with blue light. NASA astronaut Douglas H. Incredible Photos from Space: Isle Juan de Nova In the Mozambique Channel between Madagascar and the African mainland. Incredible Photos from Space: Aurora Borealis In the distance on this beautiful night over Europe.

AP15_8.jpg (JPEG-bilde, 4224x544 punkter) Most Beautiful Bookstores in the World [Editor’s note: In celebration of the holidays, we’re counting down the top 12 Flavorwire features of 2012. This post, at #1, was originally published January 31.] With Amazon slowly taking over the publishing world and bookstores closing left and right, things can sometimes seem a little grim for the brick and mortar booksellers of the world. After all, why would anyone leave the comfort of their couch to buy a book when with just a click of a button, they could have it delivered to their door? Well, here’s why: bookstores so beautiful they’re worth getting out of the house (or the country) to visit whether you need a new hardcover or not. We can’t overestimate the importance of bookstores — they’re community centers, places to browse and discover, and monuments to literature all at once — so we’ve put together a list of the most beautiful bookstores in the world, from Belgium to Japan to Slovakia. A gorgeous converted Dominican church gives the power of reading its due diligence.

Come as You Are by Nirvana - Guitar Tab and Lyrics Tab: Come as You Are by Nirvana Guitar Tab This is another nice, easy Nirvana song that uses both a single-note theme, plus other simple chords. Once you've nailed the theme, and the basic chords, try taking a turn learning the solo - it's a simple restatement of the melody, so it shouldn't be difficult to master. In the typical fashion, Nirvana plays "Come As You Are" dropped a tone - Eb Ab Db Gb Bb Eb. Album: Nevermind (1991) Audio:

Fourth potentially habitable planet discovered Other planets circling the same star – which is part of a three-star system – could include a gas-giant and an additional super-Earth with an orbital period of 75 days, but more observations are needed to confirm that. Some experts have been sceptical that M-class dwarf stars could have planets that support life because they are too dim and tend to have lots of solar flare activity which could send off lethal radiation to nearby planets. And even though this star, GJ 667C, has a much lower abundance of elements heavier than helium, such as iron, carbon, and silicon – the building blocks of terrestrial planets – than our Sun, astronomers are intrigued by the possibilities. "This was expected to be a rather unlikely star to host planets. Yet there they are, around a very nearby, metal-poor example of the most common type of star in our galaxy," said co-author Steven Vogt, a professor of astronomy and astrophysics at University of California Santa Cruz. Source: AFP