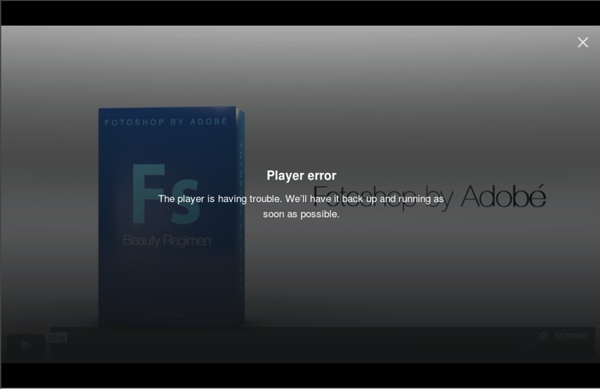 Growing Up Brown: Desexualized and Hyper-sexualized Originally published on Feminspire and cross-posted here with their permission. I’m always surprised by the way I look. Sometimes I look down and notice that my thighs are taking up much more space than I would like. Or sometimes I glance at myself in the mirror and realize that my arms are fuller and rounder than I expected. I don’t expect to look like myself. I expect to look like other girls, girls who are on TV and in magazines, girls who people call “beautiful.” 25 Most Beautiful Animals Photography on StumbleUpon I think the most beautiful pictures are those made in nature. Nothing compares with the expression of a tiger, the majestic flight of an eagle or the strength of a white bear. Below you can see 25 the most beautiful animal photographs that will capture your attention, and were stumbled on StumbleUpon.

Street casting: the next big thing Unconventional process ... Tiong Bahru in Civic Life. Photograph: Independent Cinema Office 14 Painful Examples Of Everyday Fat-Shaming If you've ever doubted that fat-shaming is something that happens every day, just listen to the hundreds of Twitter users who shared their stories last week. Blogger Melissa McEwan created the #FatMicroaggressions hashtag to start a conversation about the inappropriate and hurtful comments directed at overweight people on a regular basis. Microaggression, a term coined by Professor Chester Middlebrook Pierce in 1970, refers to small acts of aggression towards people of a certain group -- usually those of non-privileged races, classes or ethnicities. Fat acceptance blogger Living~400lbs posits that overweight people are particularly susceptible to microaggressions because it is acceptable to be openly prejudiced against fat. In a January 2009 blog post she explained: "The problem is that many people figure fat people are not 'really' people, or at least don’t deserve to be treated like people."

30 Best Earth Pictures of the Week – April 24th to May 01th 1. The Blue Dragon by Steve Richards 2. Portrait photography inspiration by Anna Williams "My name is Anna Williams. I am a 17 year old self taught photographer from Atlanta, GA. I found my love for photography about a year ago, when I obtained my first camera. I hope to take this passion farther later in life." For more portrait photography inspiration by Anna Williams, you can visit her flickr photostream here or her website right here. Absolutely Amazing Photography by Edgar Moskopp - Smashing Picture  Please keep in mind that some photos are processed with HDR in Photomatix, with Brightness, Contrast, Selective Color, Color Balance, dodging, burning, unsharp mask, Retouching, selective de-noising in Photoshop CS3 and panorama composition in Autopano Pro. By Edgar Moskopp See more photos on his Flickr stream ↑ Back to top

Venus with Biceps: A Pictorial History of Muscular Women by Maria Popova Exploring gender identity and cultural disposition through rare archival images from 1800-1980. Having competed in amateur (a.k.a. drug-free) bodybuilding in my college years and to this day remaining the dedicated maintainer of a six-pack, I’m tremendously fascinated by the intersection of femininity and muscularity. So I was thrilled to come across Venus with Biceps: A Pictorial History of Muscular Women — a fascinating collection of rare archival images by David L. Chapman and Patricia Vertinsky 30 years in the making, chronicling nearly 200 years of sociocultural narrative on the strong female physique. These women expanded and redefined femininity itself, reining in a new era of relating to the will and the body, but their plight was and remains far from easy, carried out most prominently in the battlefield of popular imagery.