Women's History, Feminist History - Articles - Making History. The writing of women's history has always been closely linked with contemporary feminist politics as well as with changes in the discipline of history itself. 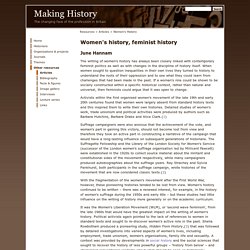 When women sought to question inequalities in their own lives they turned to history to understand the roots of their oppression and to see what they could learn from challenges that had been made in the past. If a woman's role could be shown to be socially constructed within a specific historical context, rather than natural and universal, then feminists could argue that it was open to change. Activists within the first organised women's movement of the late 19th and early 20th centuries found that women were largely absent from standard history texts and this inspired them to write their own histories. Detailed studies of women's work, trade unionism and political activities were produced by authors such as Barbara Hutchins, Barbara Drake and Alice Clark.(1) Feminism. Feminism comprises a number of social, cultural and political movements, theories and moral philosophies concerned with gender inequalities and equal rights for women. 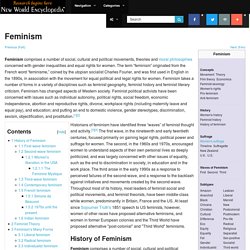 The term “feminism” originated from the French word “feminisme,” coined by the utopian socialist Charles Fourier, and was first used in English in the 1890s, in association with the movement for equal political and legal rights for women. Feminism takes a number of forms in a variety of disciplines such as feminist geography, feminist history and feminist literary criticism. Feminism has changed aspects of Western society. Feminist political activists have been concerned with issues such as individual autonomy, political rights, social freedom, economic independence, abortion and reproductive rights, divorce, workplace rights (including maternity leave and equal pay), and education; and putting an end to domestic violence, gender stereotypes, discrimination, sexism, objectification, and prostitution.[1][2]

A brief history of feminism. To celebrate International Women’s Day, here is an extract on feminism from the Dictionary of Critical Theory, edited by Ian Buchanan. 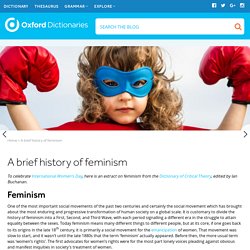 Feminism One of the most important social movements of the past two centuries and certainly the social movement which has brought about the most enduring and progressive transformation of human society on a global scale. It is customary to divide the history of feminism into a First, Second, and Third Wave, with each period signalling a different era in the struggle to attain equality between the sexes. Today feminism means many different things to different people, but at its core, if one goes back to its origins in the late 18th century, it is primarily a social movement for the emancipation of women.

That movement was slow to start, and it wasn’t until the late 1880s that the term ‘feminism’ actually appeared. A century of struggle. The Women's Movement - Our History. A brief history of the women's movement. 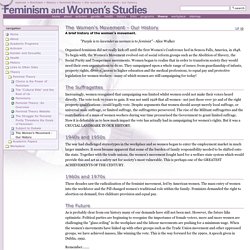 "Purple is to lavender as woman is to feminist" - Alice Walker Organised feminism did not really kick off until the first Women's Conference hed in Seneca Falls, America, in 1848. To begin with, the Women's Movement evolved out of social reform groups such as the Abolition of Slavery, the Social Purity and Temperance movements. Women began to realise that in order to transform society they would need their own organisations to do so.

They campaigned upon a whole range of issues; from guardianship of infants, property rights, divorce, access to higher education and the medical professions, to equal pay and protective legislation for women workers - many of which women are still campaigning for today! The Suffragettes Increasingly, women recognised that campaigning was limited whilst women could not make their voices heard directly. Modern Feminism. Before the 1960s, traditional American society encouraged young women to find happiness and fulfillment through marriage and homemaking. 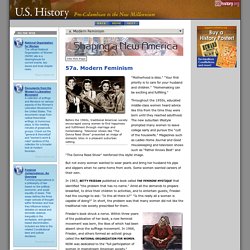 Television shows like "The Donna Reed Show" presented an image of domestic bliss in a pleasant suburban setting. "Motherhood is bliss. " "Your first priority is to care for your husband and children. " "Homemaking can be exciting and fulfilling. " Throughout the 1950s, educated middle-class women heard advice like this from the time they were born until they reached adulthood. But not every woman wanted to wear pearls and bring her husband his pipe and slippers when he came home from work. In 1963, Betty Friedan published a book called The Feminine Mystique that identified "the problem that has no name.

" Germaine Greer burst onto the feminist scene in 1970 with her book The Female Eunuch. Friedan's book struck a nerve. The Women's Movement. When did modern feminism begin? 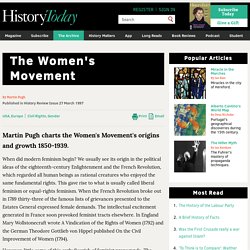 We usually see its origin in the political ideas of the eighteenth-century Enlightenment and the French Revolution, which regarded all human beings as rational creatures who enjoyed the same fundamental rights. This gave rise to what is usually called liberal feminism or equal-rights feminism. When the French Revolution broke out in 1789 thirty-three of the famous lists of grievances presented to the Estates General expressed female demands.

The intellectual excitement generated in France soon provoked feminist tracts elsewhere. In England Mary Wollstonecraft wrote A Vindication of the Rights of Women (1792) and the German Theodore Gottlieb von Hippel published On the Civil Improvement of Women (1794). However, little came of this early flourish of feminist propaganda.