When they laughed at rape. Every so often, a single experience will instantaneously illuminate an aspect of the human condition to a person who had previously failed to viscerally grasp it. 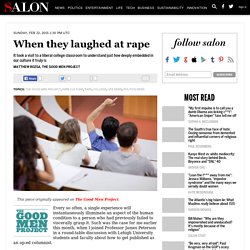 Such was the case for me earlier this month, when I joined Professor James Peterson in a round-table discussion with Lehigh University students and faculty about how to get published as an op-ed columnist. When one of the attendees asked us to elaborate on the type of negative feedback one can anticipate upon being published, I remarked that it often depends on the demographic profile of the author in question. More proof that the religious right’s “family values” obsession is really about misogyny. This article originally appeared on AlterNet. 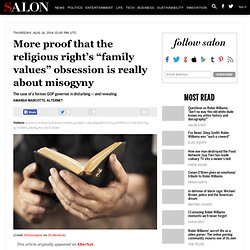 One of the great self-justifying myths of the conservatives is that their support for traditional gender roles is not rooted in misogyny, but in “family values.” They don’t hate women and want to keep them down, the argument goes, so much as they believe everyone–including women–benefits if women are relegated to a submissive role in marriage and prevented from exercising reproductive rights. They’re not trying to oppress women for the benefit of men, they argue.

North Dakota high school eliminates dangerous threat to male students: Yoga pants. Here is a “secret” about many people who write professionally for the Internet: They write without pants on. 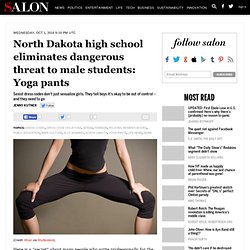 If they do wear “pants,” they’re probably the kind with elastic waistbands — leggings, yoga pants, etc. As I write this post, I am wearing a pair of skinny jeans, which are basically glorified lounge pants with a zipper — but that’s only because I came to my office today. If I were on my couch right now, as I usually am, I would probably be wearing a pair of leggings. Feminism’s ugly internal clash: Why its future is not up to white women. Earlier this week, I received an email from a reader who wondered what my work might look like if I “included the feminist perspective.” 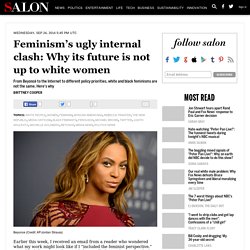 Since black feminism infuses and shapes all of my politics, I laughed. Fox’s new brand of feminism: Time for “women who really want to be women” to be “what God designed them to be” A group of Fox News pundits told the viewers of Fox & Friends on Tuesday that feminism is bad and dangerous because it “sexualizes” women instead of “feminizing” them. 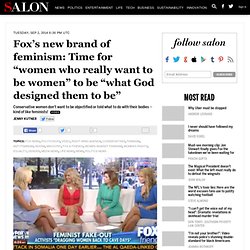 The pundits — the three conservative hosts of the Internet series Politichicks — promoted, instead, a “new brand of feminism,” which co-host Dr. Stronger passwords will never be enough: On “safety,” policing women’s choices and doing violence’s work. This weekend, someone (or some group of someones) broke into the iCloud accounts of a number of women, stole photos from these women and then posted them online. 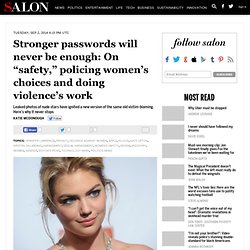 These women happen to be famous, so a lot of the headlines have been about Jennifer Lawrence and Kate Upton, but their status really doesn’t matter all that much. They weren’t targeted simply because they were celebrities, they were targeted because they were women with names the public knew and bodies men felt entitled to see. The stolen nude photos were meant to titillate the millions of anonymous strangers who would consume them, and shame the women who took them. 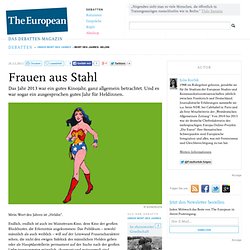 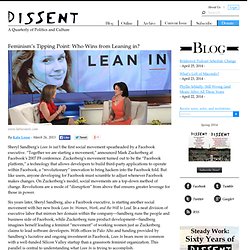 Www.katiecouric.com Sheryl Sandberg’s Lean In isn’t the first social movement spearheaded by a Facebook executive. “Together we are starting a movement,” announced Mark Zuckerberg at Facebook’s 2007 F8 conference. Zuckerberg’s movement turned out to be the “Facebook platform,” a technology that allows developers to build third-party applications to operate within Facebook, a “revolutionary” innovation to bring hackers into the Facebook fold. But like users, anyone developing for Facebook must scramble to adjust whenever Facebook makes changes. Six years later, Sheryl Sandberg, also a Facebook executive, is starting another social movement with her new book Lean In: Women, Work, and the Will to Lead. Sexual Objectification (Part 3): Daily Rituals to Stop. This is the third part in a series about how girls and women can navigate a culture that treats them like sex objects. 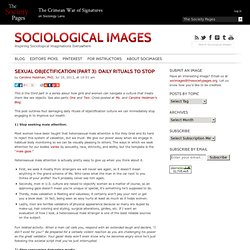 See also parts One and Two. Cross-posted at Ms. and Caroline Heldman’s Blog. This post outlines four damaging daily rituals of objectification culture we can immediately stop engaging in to improve our health. 1) Stop seeking male attention. Most women have been taught that heterosexual male attention is the Holy Grail and its hard to reject this system of validation, but we must. Heterosexual male attention is actually pretty easy to give up when you think about it. Sexual Objectification (Part 2): The Harm.

This is the second part in a series about how girls and women can navigate a culture that treats them like sex objects (see also, part One). 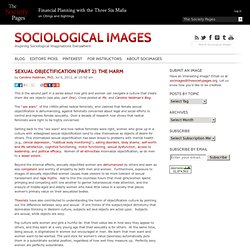 Cross-posted at Ms. and Caroline Heldman’s Blog. The “sex wars” of the 1980s pitted radical feminists, who claimed that female sexual objectification is dehumanizing, against feminists concerned about legal and social efforts to control and repress female sexuality. Sexual Objectification (Part 1): What is It? This is the first part in a series about how girls and women can navigate a culture that treats them like sex objects. Cross-posted at Ms., BroadBlogs, and Caroline Heldman’s Blog. Around since the 1970s and associated with curmudgeonly second-wave feminists, the phrase “sexual objectification” can inspire eye-rolling.

The phenomenon, however, is more rampant than ever in popular culture. Today women’s sexual objectification is celebrated as a form of female empowerment. This has enabled a new era of sexual objectification, characterized by greater exposure to advertising in general, and increased sexual explicitness in advertising, magazines, television shows, movies, video games, music videos, television news, and “reality” television. The End of Men. Earlier this year, women became the majority of the workforce for the first time in U.S. history. Most managers are now women too. And for every two men who get a college degree this year, three women will do the same. For years, women’s progress has been cast as a struggle for equality. But what if equality isn’t the end point? What if modern, postindustrial society is simply better suited to women?

John Ritter In the 1970s the biologist Ronald Ericsson came up with a way to separate sperm carrying the male-producing Y chromosome from those carrying the X. In the late 1970s, Ericsson leased the method to clinics around the U.S., calling it the first scientifically proven method for choosing the sex of a child.