A Message To Women From A Man: You Are Not “Crazy” 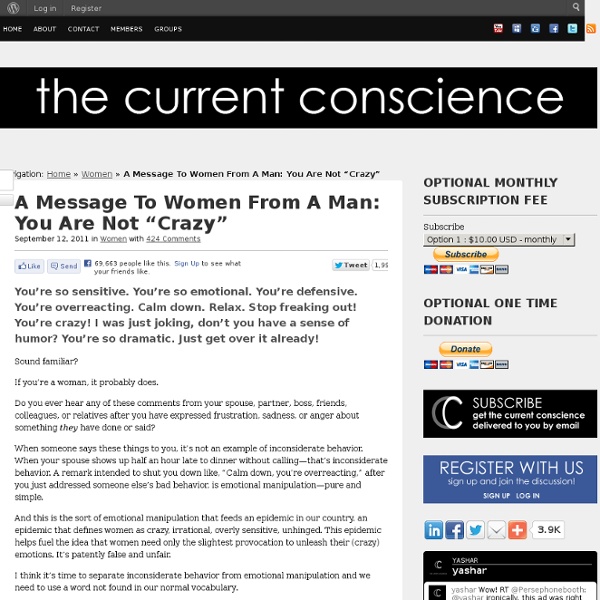 TEDxBrynMawrCollegeWomen The Dream of Reality: Heinz Von Foerster's Constructivism - Lynn Segal Helping Women Worldwide - WorldWise The following is a guest post by Jane McAuliffe, president of Bryn Mawr College, about a new education project aimed at helping women around the world. ———————————————————————– At a meeting in Washington Thursday, the U.S. While in many parts of the word women constitute the majority of undergraduates—in the U.S. their enrollment now approaches 60 percent—they do not fare so well after graduation. • Out of over 180 countries, only 27 have elected women presidents, and only 25 have appointed women prime ministers. • There are only 24 ambassadors to the United Nations who are women. • Of the members of national parliaments worldwide, less than 19 percent are women. (Figures are from the Women in Public Service Project.) Aside from helping with these specific problems, the project can also serve as a model for colleges and universities interested in working on social issues on a global scale. Return to Top

Marlo Thomas: You Know It's Good When the Boys Want in Don't get me wrong, I love men. I even married one. And I love the boys in my life -- my four stepsons, my adorable nephews and godsons, and all those great guy friends who help make my life fun and funny. But I do have to admit that I experienced a difficult moment in 2003, when after 10 years of success, the brainchild of the Ms. Foundation, Take Our Daughters to Work Day, was pressured into becoming Take Our Daughters and Sons to Work Day. I was shocked. After all the hard-won battles fought for women, how could we let this happen to girls? Like a lot of women my age, it reminded me of the low expectations that were thrust on us when we were growing up. "Don't worry, dear," she said to me. Talk about low expectations. Poring over the research, the Ms. Most important, mothers and fathers knew that something was going on with their daughters that wasn't quite right. I'll always remember that first Take Our Daughters to Work Day. And the stories coming out of the day were indelible.

The Future of Literature in the Age of Information « Three Pound Brain Information technology made Plato anxious. Writing, he feared, would lead people to abandon their memory, to trust in “external characters which are no part of themselves.” Now we find ourselves living through a new revolution in information technology, one with consequences every bit as dramatic and likely even more profound. How could we not be anxious? Our old ways of communicating are either becoming obsolete or finding themselves dramatically ‘repurposed’ before our very eyes. Including the grandest one of all: literature. Literature is one of those categories that have vexed the human intellect for centuries. The morphology of what we like to call literature has remained fairly stable since at least the beginning of the twentieth century. The problem, I would like to argue, is one of habitat. No generation has witnessed such a sudden change in cultural environment, period. So why does it all feel so, well, dusty? Or should be. One genre among many. This is no easy task. But will it?

One teachers approach to preventing gender bullying in a classroom Margaret Atwood and Graeme Gibson | Art Beat On Monday’s NewsHour, Jeffrey Brown spoke with author Margaret Atwood about her latest novel, “The Year of the Flood”: Atwood, one of Canada’s leading writers, has published more than two dozen books of poetry, fiction and non-fiction. She won the 2000 Booker Prize for her novel, “The Blind Assassin,” but is perhaps still best known for her first foray into futuristic fiction, the 1985 novel, “The Handmaid’s Tale.” Her newest novel is “The Year of the Flood” — a companion to her recent book, “Oryx and Crake.” Below is Jeffrey Brown’s extended interview with Atwood at her home in Toronto: Atwood put together a dramatic reading of the novel as part of its launch. Graeme Gibson is the author of five novels and a collection of stories called “The Bedside Book of Birds.” In the clip below, Gibson reads a passage from “The Bedside Book of Beasts,” recounting an animal encounter from his youth:

Top 100 Gender Studies Blogs - Learn-gasm By Megan Jones Whether you’re pursuing a degree from a top-tier college in women’s studies or taking a few online courses to slowly work towards a degree focused on gender, you can find a number of great blogs online that can supplement your learning experience. Here are a few that we’ve put together that deal with a large range of gender related issues. Here you’ll find blogs that range from defining what it means to be feminine or masculine to understanding your rights under law concerning gender and sexual orientation. General These blogs address a wide range of gender-related issues. Gender Pop: This blog analyzes issues of gender in science and culture. Feminism These blogs take a feminist point of view when it comes to discussing gender and political issues. Feministing: Authored by Amy S. Scholars These bloggers are professors, students and researchers interested in gender and women’s studies. Gender Identity and Sexuality Queer Studies Politics and Law Women’s Studies Men’s Studies

Why American novelists don’t deserve the Nobel Prize America wants a Nobel Prize in literature. America demands it! America doesn’t understand why those superannuated Swedes haven’t given one to an American since Toni Morrison in 1993. America wonders what they’re waiting for with Philip Roth and Thomas Pynchon. OK, enough. Boy, were we upset. It’s true that the Academy, like any body of judges, has made some ill-informed decisions. That only fed the vitriol directed at Stockholm, obscuring a valid point about American letters: We’ve become an Oldsmobile in a world yearning for a Prius. Stockholm has been trying to tell us this for a long while, and we would do well to listen. And yet here are the Americans who could win it this year, according to online oddsmakers Ladbrokes (in order of decreasing likelihood): Thomas Pynchon, Philip Roth, Cormac McCarthy, Joyce Carol Oates and Don DeLillo. But if we don’t win yet again, we are at fault. Our great writers choose this self-enforced isolation. That makes for a small literature, indeed.

Reality Check: Why Some Brains Can’t Tell Real From Imagined How do you know what’s real? A new study suggests that people’s ability to distinguish between what really happened and what was imagined may be determined by the presence of a fold at the front of the brain that develops late in pregnancy, and is missing entirely in 27% of people. Although the study sounds like it sprouted from the musings of stoned undergraduates or the abstruse pursuits of basic-neuroscience geeks, its findings may prove important for the understanding of schizophrenia, a disorder which often includes confusion between real and imagined voices. The key brain structure identified by the study is called the paracingulate sulcus (PCS), a fold in part of the prefrontal cortex, the region that is involved with planning, thought and judgment. The size of the PCS varies greatly in normal people, and some people a PCS only on one side of their brain, while others have one on both. MORE: Why Pot Smokers Are Paranoid

Norton Juster’s “The Phantom Tollbooth” at 50 Our cult of decade anniversaries—the tenth of 9/11, the twentieth of “Nevermind”—are for the most part mere accidents of our fingers: because we’ve got five on each hand, we count things out in tens and hundreds. And yet the fifty-year birthday of a good children’s book marks a real passage, since it means that the book hasn’t been passed just from parent to child but from parent to child and on to child again. A book that has crossed that three-generation barrier has a good chance at permanence. So to note the fiftieth birthday of the closest thing that American literature has to an “Alice in Wonderland” of its own, Norton Juster’s “The Phantom Tollbooth”—with illustrations, by Jules Feiffer, that are as perfectly matched to Juster’s text as Tenniel’s were to Carroll’s—is to mark an anniversary that matters. This reader, from the first generation, received a copy not long after the book appeared, and can still recall its curious force. “Five thousand bucks you got!”