Our Comeback. Behind the Lace Curtain: How Feminists Control What America Reads In 1984, the veteran novelist Kingsley Amis came out with a new book, Stanley and the Women, which was uncharacteristically rejected by several New York City publishers. 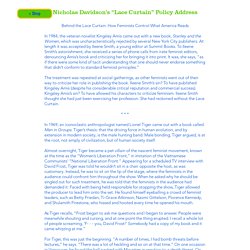 Where Feminism's Neoprudery Has Taken Us - Penthouse. These days, it can take surprisingly little for a good man to lose everything. 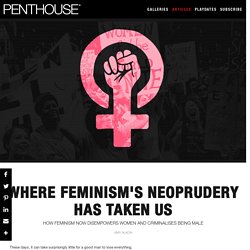 Bora Zivkovic is a slight Eastern-European-born man – 5’11,” but so slight that he often appears dwarfed by his poofy greying hair, big lumpy Slavic nose, and oversized round wire-rim glasses. Photographed at an unfortunate angle, he bears a resemblance to a cartoon owl. Nicknamed the ‘Blogfather’, Zivkovic was the editor of the Scientific American blogs network and was responsible for bringing countless writers into science blogging, and especially for encouraging women to become science bloggers. Feminism and the war on fatherhood. YESTERDAY I explained the process whereby men tamed rough, rambunctious and potentially destructive adolescent males into young men who would make good fathers. 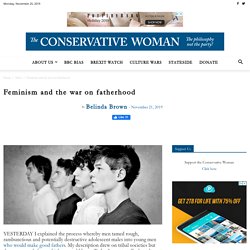 My description drew on tribal societies but there was much from which we could learn. Today I want to talk about how this male influence shaped society in ways which might have relevance for us today. Then I will look at how feminism affected this ordering of the world. I described how, in their efforts to provide for and protect the family, men tried to master the natural environment and defend territory. Untitled. It’s a dating adage that “you can’t fix a man.” 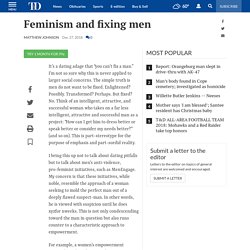 I’m not so sure why this is never applied to larger social concerns. The simple truth is men do not want to be fixed. Article_528676e0-3f11-11e7-9a9c-c705b52cbf44. With the rise of social justice movements in recent years, the last remnants of classical-liberal feminism have all but faded. It has been replaced by the rise of third-wave feminism: a movement that promotes equality, diversity and inclusivity. In principle, this new wave of feminism is all about intersectionalism — that is, extending to groups of people other than cishet, able-bodied white women of the middle and upper-middle class. In practice, the movement has become fraught with irrational, often divisive hostility under the guise of tolerance and justice.

From burning books to banning speakers from college campuses, the actions of many within the movement speak much louder than their tolerance-laden rhetoric. As humans, we use cognitive shortcuts called heuristics to make snap judgments. 82 percent of Americans don’t consider themselves feminists, poll shows.

Only 7 per cent of Britons consider themselves feminists. 85% Of Americans Believe In Women's Equality, But Only 18% Identify As Feminist - the Lala. Giving Feminism a Bad Name. Honey Badger Brigade. Hannah Wallen Hannah has witnessed women's use of criminal and family courts to abuse men in five different counties, and began writing after she saw one man's ordeal drag on for seven years, continuing even when authorities had substantial evidence that the accuser was gaming the system. 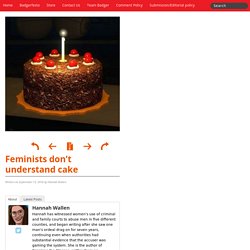 She is the author of Breaking the Glasses, written from an anti-feminist perspective, with a focus on men's rights and sometimes social issues. Breaking the Glasses refers to breaking down the "ism" filters through which people view the world, replacing thought in terms of political rhetoric with an exploration of the human condition and human interactions without regard to dogmatic belief systems. The militant enthusiasm syndrome. There are few things in the world so thoroughly despicable and deserving of immediate destruction as the fiction of an ideal cause artificially set up to elicit enthusiasm in the service of the contriver’s aims.Konrad Lorenz Imagine a band of arrogant, hyper-emotional college students taking over the dean’s office. 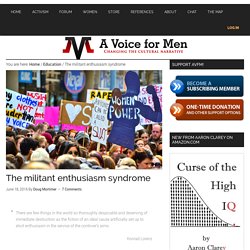 They have an agenda and refuse to leave until their demands are met. One of them latches onto a bullhorn and reads off the demands one by one. They include: (1) The establishment of an administration-supported, fully-funded men’s rights group. (2) That the college divest itself of any holdings in corporations that discriminate against men or promote feminism. (3) That the college immediately undertake a male recruitment program until the student body is 50/50 men/women. 5 Feminist Myths That Will Not Die. 82 percent of Americans don’t consider themselves feminists, poll shows.

What percent of Americans identify as feminist? - Quora. Only 7 per cent of Britons consider themselves feminists. Poll: Feminism in the U.S. - Washington Post. Msinformation - Professor Christina Hoff Sommers. Msinformation Professor Christina Hoff Sommers American Enterprise Institute I have been labelled a non-woman March is Women's History Month, but hard-line feminists in universities and major women's groups are deciding who counts as a woman. 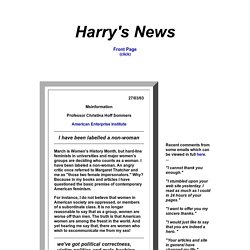 I have been labeled a non-woman. For instance, I do not believe that women in American society are oppressed, or members of a subordinate class. We've got political correctness, victim politics and male-bashing. Feminism in this country has become a parody of itself. What happened to the "equity feminism" bequeathed by our feminist foremothers? More women than men now go to college, for example. The more things improve for women, the angrier their rhetoric grows. Gender feminists take a very dim view of American society. Gender feminists continually spread fraudulent statistics.

The Feminist Cult Will Tolerate No Dissent - The Spectrum. If you criticize feminism, feminists will label you as sexist and use unethical tactics to prevent your opinion from being heard. 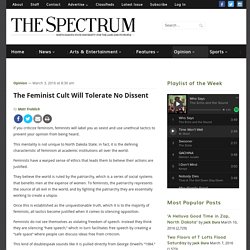 This mentality is not unique to North Dakota State; in fact, it is the defining characteristic of feminism at academic institutions all over the world. Barbara Kay: Flattening feminism’s campus myths. On the occasion of a prestigious award in her field last month, associate professor Elena Bennett in McGill University’s Natural Resources Sciences and School of Environment was interviewed by the Montreal Gazette on the subject of women and science. 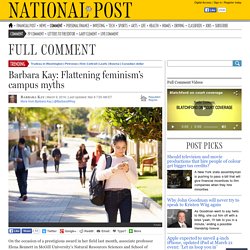 Bennett focused on the well-documented post-undergrad career stall for women in STEM (science, technology, engineering and mathematics). She attributes the gender disproportion at the high end — U.S. women comprise about 20 per cent of tenure track positions in math, 12 per cent in physics and 10 per cent in electrical engineering — to systemic misogyny, high-intensity work environments and a lack of support for mothers. Her solution: more research grants for women, no late-afternoon meetings and fewer committee obligations. Bennett’s perspective is standard in doctrinaire feminist circles. Feminism Is a Synonym for ‘Shut Up’ Posted on | February 7, 2016 | 33 Comments Feminists despise all men and never want to hear a man say a word: “I wish all men would shut the fuck up forever honestly. 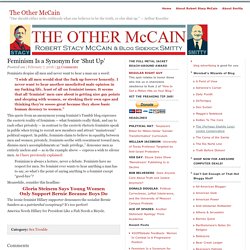 I never want to hear another unsolicited male opinion in my fucking life, least of all on feminist issues. It seems that all ‘feminist’ men care about is getting nice guy points and sleeping with women, or stroking their own egos and thinking they’re soooo great because they show basic human decency to women.” This quote from an anonymous young feminist’s Tumblr blog expresses the esoteric reality of feminism — what feminists really think, and say to each other privately — in contrast to the exoteric rhetoric feminists speak in public when trying to recruit new members and attract “mainstream” political support.

Feminism is always a lecture, never a debate. Meanwhile, consider this headline: When Is a Feminist Not a Feminist? Well done, feminism. Now man are afraid to help women at work. The book’s author, Kim Elsesser, a research scholar at the University of California, argues that a “sex partition” has sprung up, which impedes women from building the vital network of contacts both within the workplace and socially. Feminist trouble. Whelan: Speaking of a backward turn, young feminists today are obsessed with the idea of ‘rape culture’. Do you think that, as the idea of rape culture suggests, sexual violence is normalised? Paglia: ‘Rape culture’ is a ridiculous term – mere gassy propaganda, too rankly bloated to critique. Anyone who sees sex so simplistically has very little sense of world history, anthropology or basic psychology.

Only 18 percent of Americans consider themselves feminists. Plenty of people say they believe in equal rights for women, but when you ask those same people if they're feminists, most of them will say no. That's what we found in a new Vox poll, which explores the public's view on feminism, abortion, and the Affordable Care Act. The poll, conducted by research and communications firm PerryUndem, shows that a strong majority of Americans agree on gender equality.

Eighty-five percent, for example, say they believe in "equality for women. " But many fewer want to put the feminist label on their beliefs. Eighteen percent of poll respondents said they consider themselves feminist.