Dangerous Ladies. My research topic is the analysis of the function of dangerous ladies in nineteenth century literature and 20th century film—both as representations of the popular culture of each respective era. 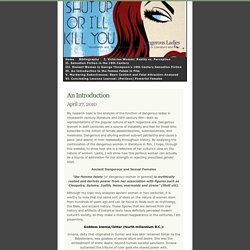 Dangerous women in both centuries are a source of instability and fear for those who subscribe to the notion of female passionlessness, submissiveness, and meekness. Dangerous and alluring women subvert patriarchy and cause a panic (and desire) in men repeatedly throughout history. By analyzing the continuation of the dangerous woman in literature in film, I hope, through this website, to show how she is a reflection of her culture’s view on the nature of women. Lastly, I will show how this perilous woman can actually be a source of admiration for her strength in rejecting prescribed gender roles. Ancient Dangerous and Sexual Females Goddess Inanna/Ishtar (fourth millennium B.C.

How To Be An Amazing Feminist If You Are A Man – Erin Matson. Men who are feminists. 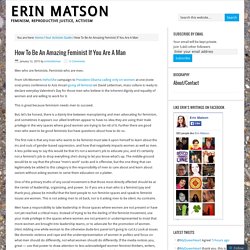 Feminists who are men. From UN Women’s HeForShe campaign to President Obama calling only on women at one (note: one) press conference to Aziz Ansari going all feminist on David Letterman, mass culture is ready to declare everyday Valentine’s Day for those men who believe in the inherent dignity and equality of women and are willing to work for it. This is great because feminism needs men to succeed. But, let’s be honest, there is a dainty line between mansplaining and men advocating for feminism, and sometimes it appears our allied brethren appear to have no idea they are using their male privilege in the very spaces where good women are trying to be rid of it. Further there are good men who want to be good feminists but have questions about how to do so. The first rule is that any man who wants to be feminist must take it upon himself to learn about the ins and outs of gender-based oppression, and how that negatively impacts women as well as men.

The Kissed Mouth: About the Author. So you fancied knowing more about me then? 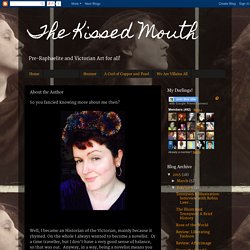 Well, I became an Historian of the Victorian, mainly because it rhymed. On the whole I always wanted to become a novelist. Or a time traveller, but I don’t have a very good sense of balance, so that was out. Anyway, in a way, being a novelist means you can go anywhere you want, any time or place. When I was 20 I discovered the Pre-Raphaelites and did not look back. My posts on The Kissed Mouth are a way of exploring all manner of Pre-Raphaelite and Victorian subjects in though-provoking and humorous ways. If you are the sort of person who worries about credentials, then rest assured I have done some book-reading in my time. Nymphomania. A quick reminder: Backlash by Susan Faludi. Susan Faludi is a Pulitzer prize-winning journalist, and it shows. 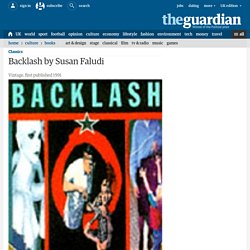 Backlash (subtitled The Undeclared War Against American Women) is punchy, well-written, well researched, convincing, thought-provoking and, in parts, very funny. Faludi's detailed and wryly observed interviews with a selection of some leading anti-feminists are a particular treat. Faludi argues that "the anti-feminist backlash has been set off not by women's achievement of full equality but by the increased possibility that they might win it. It is a pre-emptive strike that stops women long before they reach the finish line. " She describes the "countercurrents and treacherous undertows" of the backlash - and how even those who see themselves as feminists can be dragged down by them. It is a very American book, as the subtitle makes clear. Women: A quick reminder ... The Beauty Myth by Naomi Wolf.

If you have wasted even a minute of today worrying about the way your hair, breasts or thighs look, or about the wrinkles around your eyes, or whether your winter "wardrobe" is working for you ... this book is for you. 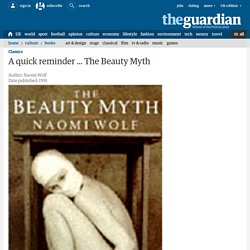 Wolf argues that beauty is the "last, best belief system that keeps male dominance intact". Somehow we've been flogged the idea that to be beautiful (which we must, or else no one will love us) we have to look a certain way: thin, youthful, smooth-skinned, small-nosed, silky-haired, etc. Hey presto: your average woman feels ugly her entire life, and old, too, for most of it.

What better way of keeping her in her place? Wolf uses the phrase "cultural conspiracy"; it's hard to imagine exactly who the conspirators might be. Wolf argues that women's magazines have played a pivotal role in the selling of the beauty myth. The Beauty Myth doesn't always convince. The world has changed - a bit - over the past decade and a half, but not enough: this remains essential reading.

18 Empowering Illustrations to Remind Everyone Who's Really in Charge of Women's Bodies. Image Credit: Carol Rossetti When Brazilian graphic designer Carol Rossetti began posting colorful illustrations of women and their stories to Facebook, she had no idea how popular they would become. 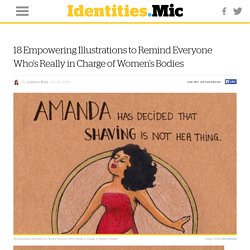 Thousands of shares throughout the world later, the appeal of Rosetti's work is clear. Much like the street art phenomenon Stop Telling Women To Smile, Rossetti's empowering images are the kind you want to post on every street corner, as both a reminder and affirmation of women's bodily autonomy. SPARK Movement.