Feminism and the mass media 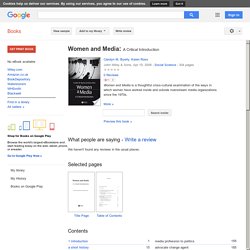 Role of Women in Mass Media, How Mass Media is changing their Lives. In modern society, everyday people are bombarded with graphic advertisements, slogans, and images that underlie a major issue; objectification and exploitation of women in mass media. 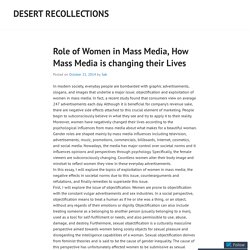 In fact, a recent study found that consumers view on average 247 advertisements each day. Although it is beneficial for company’s revenue sake, there are negative side effects attached to this crucial element of marketing. People begin to subconsciously believe in what they see and try to apply it to their reality. Moreover, women have negatively changed their lives according to the psychological influences from mass media about what makes for a beautiful woman. Men who Believe in Feminism - Amanda Goldrick-Jones. Despite popular misconceptions, some men do believe in feminism and support the feminist movement. 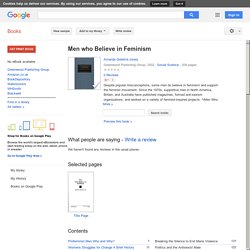 Since the 1970s, supportive men in North America, Britain, and Australia have published magazines, formed anti-sexism organizations, and worked on a variety of feminist-inspired projects. ^IMen Who Believe in Feminism^R examines and recounts the motives and strategies, the successes and failures, and the challenges and triumphs of those men who have worked to support the feminist movement, combat sexism, and convey profeminist messages to different audiences.

This timely and unique book invites readers interested in the future of gender relations to learn more about men's involvement and activism in redressing gender-based inequality. Profeminist men's groups have been responsible for many successful anti-sexist campaigns and have often gained the support of feminist women. But they have also faced a number of challenges from various constituencies. The Family - Liz Steel, Warren Kidd, Anne Brown. Experiences of family life can differ widely throughout society. 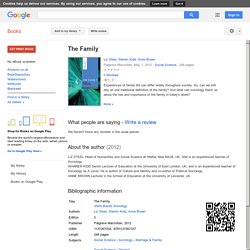 So, can we still rely on one traditional definition of the family? And what can sociology teach us about the role and importance of the family in today's world? This new edition examines the core sociological concepts that help us to understand how and why families and households are changing. The Ann Oakley Reader: Gender, Women and Social Science - Ann Oakley. Feminist theory. Women and Media: A Critical Introduction - Carolyn M. Byerly, Karen Ross. Carolyn M. 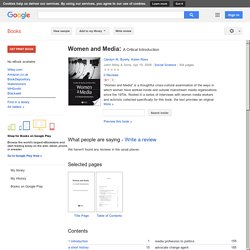 An Introduction to Sociology: Feminist Perspectives - Pamela Abbott, Melissa Tyler, Claire Wallace. The Largest Ever Analysis of Film Dialogue by Gender: 2,000 scripts, 25,000 actors, 4 million lines. Film Dialogue from 2,000 screenplays, Broken Down by Gender and Age Lately, Hollywood has been taking so much shit for rampant sexism and racism. 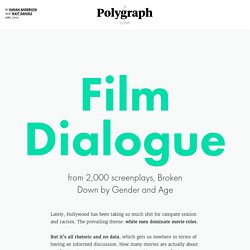 The prevailing theme: white men dominate movie roles. But it’s all rhetoric and no data, which gets us nowhere in terms of having an informed discussion. How many movies are actually about men? We didn’t set out trying to prove anything, but rather compile real data. Let’s begin by examining dialogue, by gender, for just Disney films. In January 2016, researchers reported that men speak more often than women in Disney’s princess films. This dataset isn’t perfect. Methodology For each screenplay, we mapped characters with at least 100 words of dialogue to a person’s IMDB page (which identifies people as an actor or actress).

Feminism. The basic assumption shared by all feminists is that women suffer certain injustices on account of their sex. 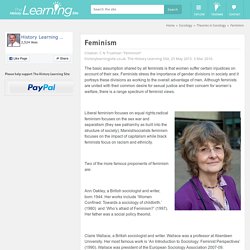 Feminists stress the importance of gender divisions in society and it portrays these divisions as working to the overall advantage of men. Although feminists are united with their common desire for sexual justice and their concern for women’s welfare, there is a range spectrum of feminist views. Liberal feminism focuses on equal rights;radical feminism focuses on the sex war and separatism (they see patriarchy as built into the structure of society); Marxist/socialists feminism focuses on the impact of capitalism while black feminists focus on racism and ethnicity. Two of the more famous proponents of feminism are: Sociology in Perspective - Mark Kirby. Dictionary of Media and Communications - Marcel Danesi. Isis International. Feminist Perspectives on Media by Bandana Rana One of the most significant breakthroughs in the last century was the globalisation of the feminist agenda. 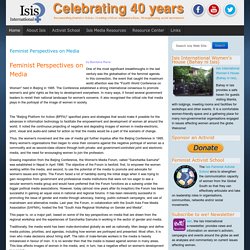 In this connection, the event that caught the maximum world attention was the "Fourth World Conference on Women" held in Beijing in 1995. The Conference established a strong international consensus to promote women's and girls' rights as the key to development everywhere. In many ways, it forced several government leaders to revisit their national landscape for women's concerns.

The "Beijing Platform for Action (BPFA)" specified plans and strategies that would make it possible for the advances in information technology to facilitate the empowerment and development of women all around the world. Thus, the women's movement and the use of media got further impetus after the Beijing Conference in 1995. Traditionally, the media world has been male-dominated globally as well as nationally.